After mining, a coal company is required to restore the land it disturbed, e.g., by regrading or replanting. The federal government requires coal companies to get bonds to assure their payment for these activities.

Federal law permits coal mine operators in some cases to guarantee these costs on the basis of their own finances, a practice known as self-bonding, rather than by securing a bond through another company or providing collateral.

Some stakeholders told us that self-bonds are riskier now than before, citing industry bankruptcies and lower coal demand.

We recommended that Congress consider amending the law to eliminate self-bonding. 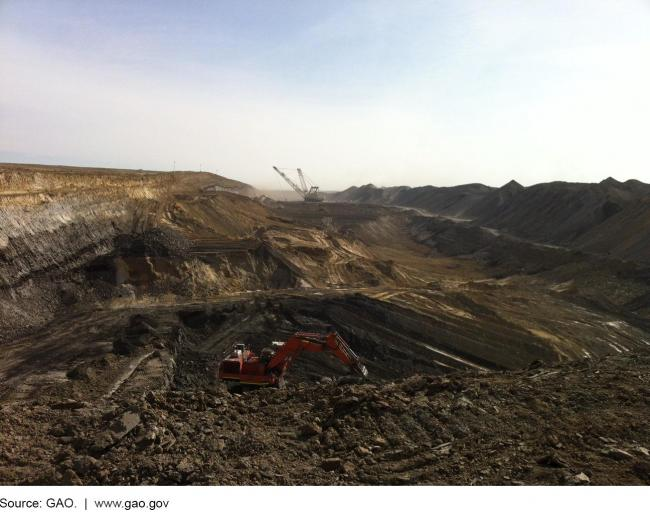 This is a photo of heavy equipment in use at a surface mine.

Amount of Financial Assurances Held in 2017, by Type, for Reclaiming Coal Mines in States and on Indian Tribal Lands with Active Coal Mining

Obtaining additional financial assurances from operators for unanticipated reclamation costs, such as long-term treatment for water pollution, can be difficult.

Determining the financial stability of surety companies has been challenging in certain instances.

Self-bonding presents a risk to the government because it is difficult to (1) ascertain the financial health of an operator, (2) determine whether the operator qualifies for self-bonding, and (3) obtain a replacement for existing self-bonds when an operator no longer qualifies. In addition, some stakeholders said that the risk from self-bonding is greater now than when the practice was first authorized under the Surface Mining Control and Reclamation Act (SMCRA).

GAO's previous work examining environmental cleanup found that the financial risk to government and the amount of oversight needed for self-bonds are relatively high compared to other forms of financial assurances. GAO also previously reviewed federal financial assurance requirements for various energy and mineral extraction sectors and found that coal mining is the only one where self-bonding was allowed. However, because SMCRA explicitly allows states to decide whether to accept self-bonds, eliminating the risk that self-bonds pose to the federal government and states would require SMCRA be amended.

Coal accounts for 17 percent of domestic energy production. SMCRA requires coal mine operators to reclaim lands that were disturbed during mining and to submit a financial assurance in an amount sufficient to ensure that adequate funds will be available to complete reclamation if the operator does not do so. Recent coal company bankruptcies have drawn attention to whether financial assurances obtained by OSMRE and state agencies will be adequate to reclaim land once coal mining operations have ceased.