The Wildlife and Sport Fish Restoration (WSFR) Program, part of the Fish and Wildlife Service, awarded $54 million in FY 2016 in competitive grants for projects ranging from building boat docks to acquiring wetlands.

We looked at WSFR’s process for awarding and monitoring grants through five competitive grant programs it manages. Our review found that, although WSFR's process was consistent with federal regulations, some performance reports WSFR uses to monitor grants were missing required information. We recommended that WSFR develop a standardized way to collect required information to ensure effective oversight.

(This photo was updated to show an example of a dock that was eligible for one of the grant programs.)

One of the grant programs WSFR manages helps support construction of boat docks, such as this one in Washington, D.C. 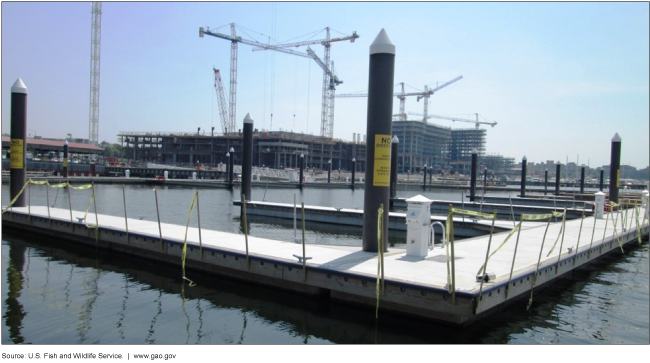 Photograph of boat and dock.

The U.S. Fish and Wildlife Service's (FWS) Wildlife and Sport Fish Restoration (WSFR) program, within the Department of the Interior, awards and monitors five competitive grant programs. These grant programs fund different types of projects ranging from building docks to acquiring wetlands. GAO found that the number of grants and funding awarded varied by grant program from fiscal years 2012 through 2016.

aData show awards and funding in the fiscal year in which funds were initially obligated to recipients.

The award process WSFR uses for the five competitive grant programs generally involves publicly announcing the grant opportunity through a Notice of Funding Opportunity, which contains information applicants need to consider when applying, such as available funding and criteria that will be used to score applications. A panel comprised of WSFR staff, and in some cases other FWS staff or a third party organization, reviews and scores the applications based on the criteria in the Notice of Funding Opportunity and develops a list of recommended projects and funding amounts. The list is forwarded to the Director of FWS for review and approval. GAO found that WSFR's grant award process is consistent with federal regulations for awarding federal grants.

FWS awarded $1.5 billion in grants in fiscal year 2016, which represented about half of the agency's budget. In general, FWS awards two types of grants: (1) formula grants, which are distributed to recipients based on a required formula, and (2) competitive grants, where potential recipients submit an application for funding that is reviewed and scored against criteria. Within FWS, WSFR manages several grant programs.

GAO recommends that FWS develop a template or other standardized method to facilitate collection of all required information for grant performance reports. The Department of the Interior concurred with this recommendation.