Mifeprex is a prescription drug used for the medical termination of early pregnancy. FDA approved changes to the indication and dosing regimen for the drug in 2016, including increasing the gestational age limit. Some are concerned with the safety of these changes and the effectiveness of FDA's monitoring.

We found that FDA has not identified any significant concerns with the safety and use of Mifeprex through its monitoring activities. However, stakeholder groups had mixed views—some said FDA is appropriately monitoring Mifeprex, while others said that FDA may not be aware of all adverse events associated with the drug. 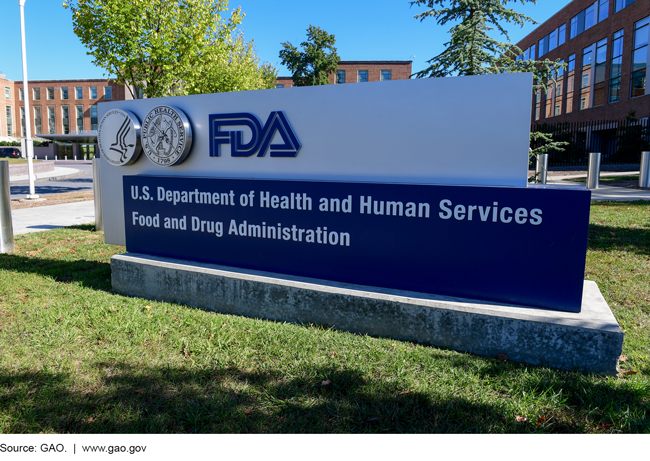 Photo of the Food and Drug Administration sign in front of the building.

The Food and Drug Administration (FDA) followed its standard review process when it approved the application and revised labeling reflecting certain changes, including the indication and dosing regimen, for the drug Mifeprex, which is used for the medical termination of early pregnancy. It based its approval on reviews of peer-reviewed published studies, articles, and other information submitted by Mifeprex's sponsor. These studies focused on topics related to the proposed labeling changes, including revision of the dosing regimen, increased gestational age, method of follow-up care, and type of health care provider authorized to prescribe Mifeprex. FDA also received three letters from advocacy groups requesting that FDA revise the Mifeprex labeling in a manner that would reflect clinical practice. In addition, FDA reviewed the Risk Evaluation and Mitigation Strategy (REMS)—a set of restrictions beyond the label that FDA may impose—associated with Mifeprex, and determined it continued to be necessary. FDA also reviewed adverse events—which the agency refers to as any untoward medical event associated with the use of a drug in humans, whether or not the event is considered to be drug related—associated with Mifeprex. It determined that the rates of certain adverse events remained stable and acceptably low. In addition, FDA reviewed information regarding potential risks of specific conditions associated with the use of Mifeprex and revised the labeling accordingly. FDA determined that the information it reviewed supported the changes to the Mifeprex labeling.

FDA has conducted a variety of monitoring activities and these have not identified significant concerns with the safety and use of Mifeprex, in accordance with its approved REMS.

FDA has conducted three inspections of Mifeprex's sponsor since 2008 regarding adverse event reporting associated with Mifeprex—in 2010, 2014, and 2016—and identified minor deficiencies, such as the use of an outdated reporting form.

FDA conducted a REMS compliance inspection in 2014 and did not identify any deficiencies.

FDA identified approximately 4,200 instances of adverse events associated with Mifeprex from September 28, 2000, through June 30, 2017, among the approximately 3.2 million women who have used the drug. FDA identified 20 deaths in this period—a rate much lower than for women who proceeded to live birth. FDA learned of 2 additional deaths associated with Mifeprex since June 30, 2017.

GAO found that the views of stakeholder organizations were mixed regarding FDA's monitoring of Mifeprex. Positive comments included that the agency has a comprehensive monitoring program and a robust adverse event reporting system. Criticisms included that adverse events may be underreported and that FDA may only be aware of a fraction of them. Similarly, stakeholder organizations shared mixed views on the drug's safety. Positive comments included that the mortality rate associated with Mifeprex is extremely low. Safety concerns included that the revised labeling no longer requires patients to have a second visit with a health care provider, and that certain safety issues may be exacerbated by the increased gestational age limit approved by FDA.

FDA initially approved Mifeprex in 2000 and restricted the drug's distribution to assure its safe use. In 2011, the agency approved a REMS for the drug. In March 2016, FDA approved an application for changes to the indication and dosing regimen for Mifeprex, which were reflected in revised labeling. Other changes included omitting the requirement that the prescriber be a physician. At that time, FDA also made modifications to the REMS. Some have questioned the safety implications of these changes for women using the drug.

GAO reviewed documents related to Mifeprex's relabeling, including FDA policies and regulations. GAO analyzed adverse event reports related to Mifeprex and reviewed FDA inspection reports of Mifeprex's sponsor. GAO also examined studies and data related to the safety and use of Mifeprex, and obtained information from FDA officials; Mifeprex's sponsor; and 13 stakeholder organizations, including medical associations and advocacy groups selected on the basis of their medical or scientific expertise, relevant publications, or familiarity with the drug's safety.

The Department of Health and Human Services provided technical comments on a draft of this report, which we incorporated as appropriate.