How much does the federal government really spend on climate change programs?

We also found that OMB reports should include information on programs with climate change-related financial risks, such as disaster relief. We recommended that OMB provide information on these risks and further analysis in future funding reports. 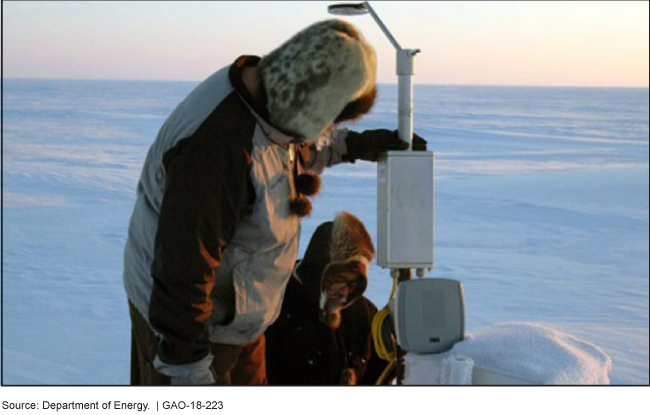 This photo shows researchers in cold weather gear working on a scientific instrument.

In its reports to Congress, the Office of Management and Budget (OMB) reported that annual federal climate change funding increased by $4.4 billion from fiscal years 2010 through 2017. For example, reported annual funding for technology to reduce emissions increased by about $3.5 billion, as seen in the figure below. Although OMB included information on federal fiscal exposure to climate change in the President's budgets for fiscal year 2016 and 2017, it did not provide this information in its most recent climate change funding reports. For example, the reports did not include information on programs—such as disaster assistance—whose costs were likely to increase due to climate change which would have provided more complete information for making spending trade-off decisions for climate activities. According to GAO's prior work, more complete information on fiscal exposures and the long-term effects of decisions would help policymakers make trade-offs between spending with long-term and short-term benefits.

Since 1993, OMB has reported over $154 billion in funding for federal climate change activities, spread across the government—raising questions about fragmentation, overlap, or duplication.

GAO is making two recommendations to OMB for enhancing the information it provides to Congress, in conjunction with future funding reports. OMB agreed with the findings but disagreed with GAO's recommendations, which GAO continues to believe are valid as discussed in the report.