From travel mugs to cosmetics, counterfeit goods harm the U.S. economy and can pose a threat to consumers.

These products can be hard to spot and may be offered online next to authentic goods. For example, manufacturers determined 20 of 47 items we purchased from third-party sellers on popular sites were counterfeit.

We recommended that CBP improve evaluations of the effectiveness of its efforts and assess opportunities to enhance information sharing with the private sector. 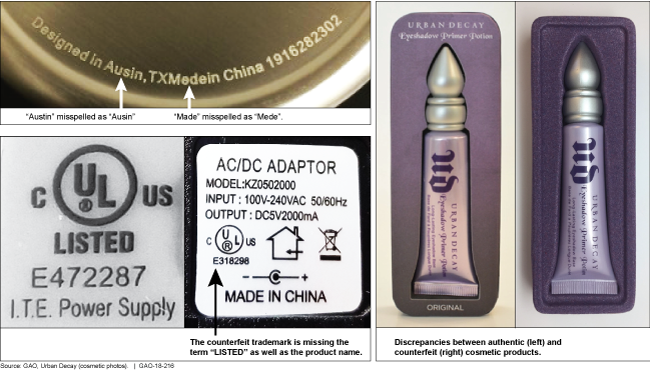 Changes in the market for counterfeit goods entering the United States pose new challenges for consumers, the private sector, and U.S. agencies that enforce intellectual property rights (IPR). Specifically, growth in e-commerce has contributed to a shift in the sale of counterfeit goods in the United States, with consumers increasingly purchasing goods online and counterfeiters producing a wider variety of goods that may be sold on websites alongside authentic products. For example, 20 of 47 items GAO purchased from third-party sellers on popular consumer websites were counterfeit, according to testing by the products' rights holders (see table), highlighting potential risks to consumers. The changes in the market for counterfeit goods can also pose challenges to the private sector—for example, the challenge of distinguishing counterfeit from authentic goods listed for sale online—and complicate the enforcement efforts of U.S. Customs and Border Protection (CBP) and U.S. Immigration and Customs Enforcement (ICE).

CBP and ICE engage in a number of activities to enhance IPR enforcement; however, while ICE has assessed some of its efforts, CBP has taken limited steps to do so. CBP's and ICE's IPR enforcement activities broadly include detecting imports of potentially IPR-infringing goods, conducting special operations at U.S. ports, engaging with international partners, and undertaking localized pilot programs or port-led initiatives. CBP and ICE have collected some performance data for each of the eight activities GAO reviewed, and ICE has taken some steps to understand the impact of its efforts. However, CBP has conducted limited evaluation of its efforts to enhance IPR enforcement. Consequently, CBP may lack information needed to ensure it is investing its resources in the most efficient and effective activities.

Infringement of IPR through the illegal importation and distribution of counterfeit goods harms the U.S. economy and can threaten the health and safety of U.S. consumers. CBP leads IPR enforcement at U.S. ports of entry by detecting and seizing counterfeit goods that enter the United States. CBP works with ICE, which investigates IPR violations and builds cases for prosecution.

GAO was asked to review CBP's and ICE's IPR enforcement at U.S. borders. In this report, GAO examines (1) what is known about counterfeit goods entering the United States and the challenges they present, (2) efforts CBP and ICE have undertaken to enhance IPR enforcement and the extent to which they have assessed the results, and (3) the extent of CBP's and ICE's collaboration on IPR enforcement and ways they coordinate with the private sector. GAO reviewed agency data and documents, interviewed agency officials, and conducted field work at port locations selected on the basis of factors such as the volume of IPR seizures and variety of modes of transportation at each location. GAO also conducted undercover purchases of commonly counterfeited consumer goods on popular consumer websites, using investigative tools and techniques.

GAO is making two recommendations to CBP, recommending that it (1) evaluate its efforts to enhance IPR enforcement and (2) assess potential additional information sharing with the private sector. CBP agreed with these recommendations.

More counterfeit goods, drugs, and other illegal or prohibited items may be entering the United...
Blog Post

Love is in the Air: A GAO Mixtape, Part 2

Today, we celebrate our love for you – and our work. Maybe you noticed this with our first Valentine...
Chuck Young
Managing Director
youngc1@gao.gov
(202) 512-4800
International Affairs
Border controlCommerceConsumersCopyrightCounterfeit goodsE-commerceIntellectual propertyIntellectual property rightsPrivate sectorSearch and seizureWebsitesPublic health emergencies