The FDA warned in 2016 that infants face a higher health risk than adults from arsenic owing to their less-varied diets, and proposed guidance on arsenic levels in infant rice cereal.

We reviewed recent scientific work and FDA and USDA actions to manage the risk of arsenic in rice. We found the agencies have researched methods to detect arsenic in rice and taken other actions, but that FDA could better communicate the risk to the public and coordinate with other agencies.

We recommended that, among other things, FDA develop a timeline to finalize its guidance on infant rice cereal and work to better coordinate its actions. 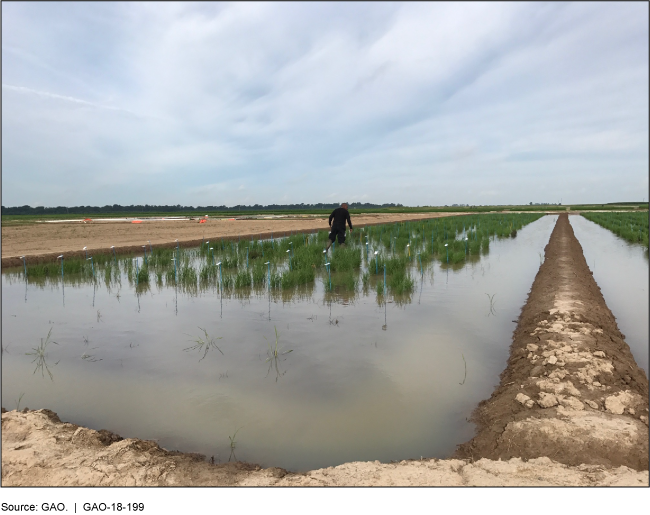 Photograph of a man working in a flooded rice field

The National Research Council (NRC) of the National Academy of Sciences, in 2013, and more recent key scientific reviews reported evidence of associations between long-term ingestion of arsenic and adverse human health effects, such as cardiovascular disease. Many of the studies NRC reviewed as part of its survey of the scientific literature examined the ingestion of arsenic in drinking water, but others looked at arsenic from all sources, including dietary sources such as rice. NRC stated that evidence suggests that food, particularly rice, may be a significant source of inorganic arsenic, the more toxic of the two forms of arsenic; however, consumption of rice and levels of arsenic in rice vary widely, making it difficult to estimate arsenic intake from rice. NRC identified stronger evidence for some health effects at higher levels of arsenic—defined by NRC as 100 parts per billion or higher in drinking water—than at lower levels, which are more common in the United States, and noted that research on the health effects of ingesting lower levels of arsenic is ongoing.

The Food and Drug Administration (FDA) and the U.S. Department of Agriculture (USDA) have taken actions to manage the risk of arsenic in rice to human health, including assessing the type and prevalence of health effects that may result from long-term ingestion of arsenic in rice. FDA also has taken action to publicly communicate and report on the risk. In 2016, FDA issued a risk assessment about the human health effects from long-term ingestion of arsenic in rice and draft guidance recommending industry not exceed a level of 100 parts per billion of inorganic arsenic in infant rice cereal. FDA noted it issued this guidance because infants face a higher risk owing to their less-varied diets. However, FDA has not updated the risk assessment, which was informed by a review of scientific studies published before February 2015, or finalized the draft guidance. In prior work, GAO has found that sharing risk information and incorporating stakeholder feedback can help organizations identify and better manage risks, as well as increase transparency and accountability to Congress and taxpayers. FDA officials stated that they may update the risk assessment based on newly-available information and consider public comments before finalizing the draft guidance. However, FDA officials could not provide a specific timeline for either. By developing such a timeline, FDA could help clarify when it will take action and improve the transparency of its decisions.

FDA coordinated with USDA and other federal agencies on actions to manage the risk of arsenic in rice to varying extents. For example, FDA and USDA coordinated on developing arsenic detection methods for rice to a limited extent, although both agencies have crosscutting strategic goals for developing detection methods for foodborne contaminants, including arsenic. GAO has noted in prior work that developing interagency mechanisms to coordinate crosscutting issues may reduce potentially duplicative efforts. FDA and USDA officials stated that they coordinated on an informal basis but have no mechanism for coordinating more formally. By developing a coordination mechanism, FDA and USDA could enhance their ability to use their resources efficiently and avoid potentially duplicative efforts.

Arsenic, an element in the earth's crust, can be harmful to human health and may be present in water and certain foods, such as rice. Rice may be more susceptible to arsenic contamination than other crops due to the flooded conditions in which it is typically grown. FDA and USDA work to address food safety risks. FDA's responsibilities for rice include regulatory and research programs; USDA's include research programs.

GAO was asked to review issues related to arsenic and rice. GAO examined (1) what NRC and recent key scientific reviews have reported about the effects of ingestion of arsenic on human health, (2) the extent to which FDA and USDA have managed the risk to human health from arsenic in rice, and (3) the extent to which FDA has coordinated with USDA and other federal agencies on actions to manage the risk. GAO analyzed a 2013 NRC report on inorganic arsenic, 14 reviews of scientific studies on the human health effects of ingesting arsenic published from January 2015 to June 2017, and agency documents; interviewed agency officials; and compared good practices with actions FDA and USDA took to manage risk and that FDA took to coordinate.