"Cargo preference" laws require agencies to ship half of U.S. food aid to a given geographic area on U.S. ships. The intent is to ensure a merchant marine—both ships and mariners—will be available to help the military when needed.

We testified that cargo preference increased food aid costs by $107 million over about 3 years, and that its effect on mariner availability was unclear. Also, without a definition in the law, "geographic area" is open to interpretations that can raise costs.

In 2015, we recommended that the Department of Transportation study mariner availability and that Congress consider defining "geographic area." 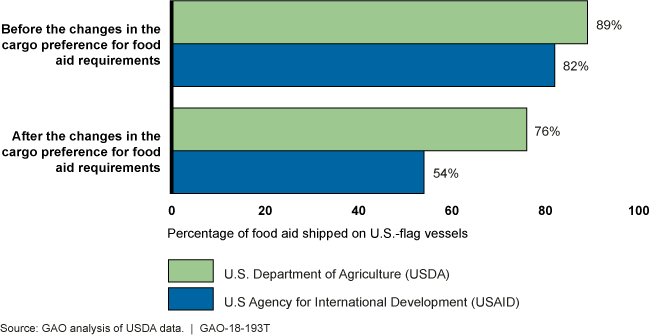 In August 2015, GAO found that cargo preference for food aid (CPFA) requirements increased the overall cost of shipping food aid by an average of 23 percent, or $107 million, over what the cost would have been had CPFA requirements not been applied from April 2011 through fiscal year 2014. Moreover, differences in the implementation of CPFA requirements by the U.S. Agency for International Development (USAID) and U.S. Department of Agriculture (USDA) contributed to higher shipping costs for USDA. Congress lowered the minimum percentage of food aid to be carried on U.S.-flag vessels from 75 to 50 percent in 2012. Following this reduction, USAID—which applies a broader interpretation of the geographic area requirement under CPFA—was able to substantially increase the proportion of food aid awarded to foreign-flag vessels, which on average have lower shipping costs, helping to reduce its average shipping cost. In contrast, USDA was able to increase the proportion of food aid awarded to foreign-flag vessels by only a relatively small amount, because a court order compels it to meet the minimum percentage of food aid carried on U.S.-flag vessels by individual country. As of October 2017, no legislation has been introduced to clarify the definition of “geographic area”, which could allow USDA to administer CPFA using a more flexible method.

Note: USAID's costs do not include shipping of bulk food aid.

GAO also reported in 2015 that CPFA's contribution to sufficient sealift capacity was unclear. GAO found that while CPFA had ensured that a portion of U.S.-flag vessels carry some food aid cargo, the number of vessels carrying food aid and the mariners required to crew them still declined. However, the available pool of sealift capacity has always met all of the Department of Defense's (DOD) needs, without the full activation of the reserve sealift fleet. According to DOD officials, DOD's most serious scenario would require a full and prolonged—a period longer than 6 months—activation of the reserve sealift fleet and the use of commercial vessels. In 2015, the Maritime Administration (MARAD) estimated the number of mariners needed under the most serious scenario. MARAD officials also told GAO that crewing of the reserve sealift vessels was voluntary, and thus the number of those who would actually crew these vessels was uncertain. While MARAD has taken some steps to study mariner numbers, as of August 2017, it had not yet fully assessed the potential availability of all qualified mariners. Therefore, the actual number of U.S. mariners qualified and available to fulfill DOD's needs under the most serious scenario remains unknown.

Cargo preference laws require that a percentage of U.S. government cargo, including international food aid, be transported on U.S.-flag vessels according to geographic area, although the laws do not define “geographic area.” One intention of these laws is to ensure a merchant marine—both vessels and mariners—capable of providing DOD sealift capacity in times of war or national emergency, including a full, prolonged activation of the reserve fleet. The reserve fleet is composed of those vessels owned by the U.S. government to meet logistic military needs that cannot be met by commercial vessels. Over the years, Congress has amended cargo preference laws to vary the CPFA percentage requirement.

In its August 2015 report, GAO suggested that Congress should consider clarifying CPFA legislation to define “geographic area” in a manner that ensures agencies can fully utilize the flexibility Congress granted to them in lowering the CPFA requirement. GAO also recommended, and MARAD agreed, to study the potential availability of all qualified mariners needed to meet a full and prolonged activation of the reserve sealift fleet. Both actions remain unimplemented.