In 2007, the Department of Energy began constructing the Mixed Oxide (MOX) Fuel Fabrication Facility in South Carolina to dispose of 34 metric tons of surplus, weapons-grade plutonium. This facility is now about 30 percent complete.

Due to cost overruns and schedule delays, Congress requested that DOE and the Army Corps of Engineers assess the facility contract to determine if it could be converted from a cost-reimbursable to a fixed-price type contract. We reviewed their reports and found that converting the contract would limit the government's risk of future cost increases but would take time and could add some costs. 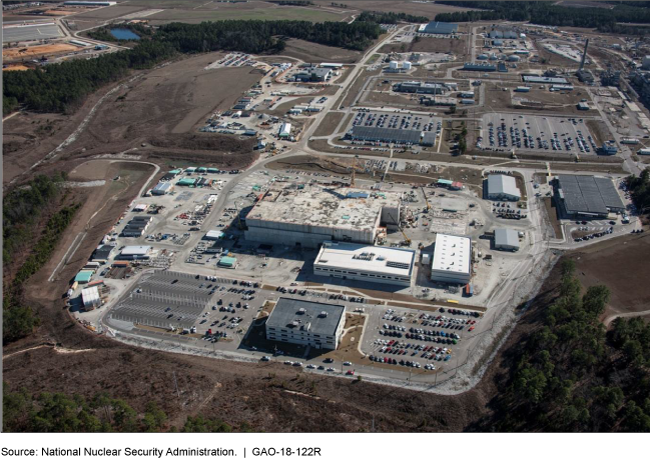 According to officials GAO interviewed, converting the line item of the contract to construct the Mixed Oxide Fuel Fabrication Facility (MOX facility)--which would make nuclear fuel using plutonium and uranium oxides--from a cost reimbursable-type contract to a fixed-price incentive firm contract, as recommended by a U.S. Army Corps of Engineers (Corps) report, is not certain to reduce total government costs. Further, the process of converting the contract to a fixed-price incentive firm contract could present uncertainty about the costs of the project. For example, according to its representatives, the MOX facility contractor will account for increased risks and other uncertainties when developing its proposal. However, according to the Corps report, such a conversion would limit the government's risk of potential future cost increases by shifting this risk to the contractor.

In addition, National Nuclear Security Administration (NNSA) officials GAO interviewed said they do not expect that converting the MOX facility construction contract line item to a fixed-priced incentive firm contract line item would significantly alter the life-cycle cost for the Plutonium Disposition program. NNSA's 2016 life-cycle cost estimate for the program--which GAO found in September 2017 (GAO-17-390) did not follow best practices--calls for 25 years of annual funding greater than $1 billion. Contractor representatives GAO interviewed said that the costs to operate the MOX facility would be less than NNSA's estimate.

Plutonium--a man-made, radioactive element produced by irradiating uranium in nuclear reactors--poses a risk of proliferation and risks to human health and the environment if not managed safely. As part of DOE's Plutonium Disposition program, NNSA began constructing the MOX facility in 2007 at DOE's Savannah River Site in South Carolina. Starting with its fiscal year 2014 budget request, DOE proposed slowing down work on the MOX facility while it assessed alternative approaches for plutonium disposition. In April 2014, DOE identified an alternative "dilute and dispose" approach that DOE believes could significantly reduce the life-cycle cost of the program.

To address these objectives, GAO reviewed the DOE and Corps reports; reviewed prior cost estimates for construction of the MOX facility and the Plutonium Disposition program; and interviewed officials from DOE, NNSA, the Corps, and the contractor constructing the MOX facility.