Passed in 2009, the Kissell Amendment restricts the Department of Homeland Security to procuring uniforms and other textiles from U.S. manufacturers, with certain exceptions. DHS has incorporated the restriction into its procurement policies and practices.

But we found, due in part to the exceptions, that the restriction has limited effect. For example, procurements must be made in accordance with U.S. trade agreements, which means most DHS offices must treat certain textiles made in 128 countries the same as domestic products. As a result, 58 percent of funds spent to order uniforms under the current DHS contract are for imported items.

Examples of Department of Homeland Security Uniforms and Body Armor

In practice, the Kissell Amendment restriction affects a limited number of procurements due to multiple factors and has not fully restricted DHS from purchasing textiles from foreign sources. The restriction applies only to certain textile purchases directly related to U.S. national security interests above the simplified acquisition threshold of $150,000, and must be applied consistent with U.S. obligations under international agreements. For most of DHS, this restriction limits only procurements that fall between $150,000 and $191,000, the World Trade Organization Government Procurement Agreement threshold. However, because procurements by the Transportation Security Administration (TSA) of textiles are excluded from most international agreements, the Kissell Amendment prevents TSA's purchasing of certain textiles above $150,000 from all but three foreign countries. In September 2014, DHS signed a uniforms contract, the largest procurement covered by the Kissell Amendment. Under this contract, DHS has ordered 58 percent of the $164.6 million in uniform items from foreign sources through June 2017 (see figure).

DHS Procurement of Uniform Items by Country, October 2014 to June 2017 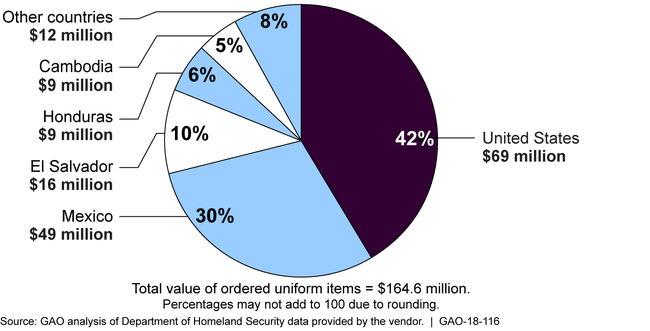 The U.S. textile industry sustained significant losses when textile production fell from $71 billion in 2006 to $46 billion in 2009, according to the U.S. Bureau of Economic Analysis. As a part of the American Recovery and Reinvestment Act of 2009, Congress passed the Kissell Amendment, which placed a restriction on DHS's procurement of certain textiles from foreign sources. DHS has applied this restriction to uniforms and body armor. The amendment was intended to increase opportunities for American textile and apparel manufacturers, according to the Senate Committee on Appropriations.

The Senate report that accompanied Senate Bill 1619, a bill related to the Consolidated Appropriations Act, 2016, includes a provision for GAO to review DHS's implementation of the Kissell Amendment and its effectiveness. This report addresses the extent to which (1) DHS has incorporated the Kissell Amendment into its procurement policies and procedures and (2) the Kissell Amendment affects DHS's procurement of textiles. To perform this work, GAO analyzed DHS policies and procedures, procurement obligations data, textile contract files, and vendor ordering data from DHS's current uniforms contract. GAO also interviewed DHS and U.S. Trade Representative officials and private sector representatives, including the vendor for the current DHS uniforms contract. GAO received technical comments from DHS, which GAO incorporated as appropriate.

For more information, contact Kimberly Gianopoulos at (202) 512-8612 or gianopoulosk@gao.gov.