The Central States, Southeast and Southwest Areas Pension Fund (CSPF) was established in 1955 to provide pension benefits to trucking industry workers, and is one of the largest multiemployer plans. According to its regulatory filings, CSPF had less than half the estimated funds needed to cover plan liabilities in 1982 at the time it entered into a court-enforceable consent decree that provides for oversight of certain plan activities. Since then, CSPF has made some progress toward achieving its targeted level of funding; however, CSPF has never been more than 75 percent funded and its funding level has weakened since 2002, as shown in the figure below. 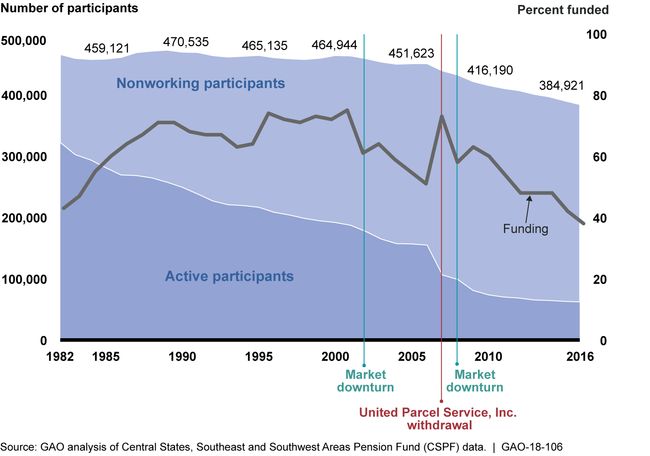 Note: The most recent, publicly available data were from 2016. End-of-year participant data and beginning-of-year funding data are presented at the closest year end.

Stakeholders GAO interviewed identified numerous factors that contributed to CSPF's financial condition. For example, stakeholders stated that changes within the trucking industry as well as a decline in union membership contributed to CSPF's inability to maintain a healthy contribution base. CSPF's active participants made up about 69 percent of all participants in 1982, but accounted for only 16 percent in 2016. The most dramatic change in active participants occurred in 2007 when the United Parcel Service, Inc. (UPS) withdrew from the plan. At that time, UPS accounted for about 30 percent of the plan's active participants (i.e. workers). In addition, the market declines of 2001 to 2002 and 2008 had a significant negative impact on the plan's long-term investment performance. Stakeholders noted that while each individual factor contributed to CSPF's critical financial condition, the interrelated nature of the factors also had a cumulative effect on the plan's financial condition.

Both CSPF's investment policy and the process for setting and executing it have changed several times since the consent decree was established in 1982. The original consent decree gave an independent asset manager—called a named fiduciary—exclusive authority to set and change the plan's investment policies and manage plan assets, and prohibited CSPF trustees from managing assets or making investment decisions. Initially, the named fiduciaries sold the troubled real estate assets acquired during the pre-consent decree era. Subsequent changes include the following:

In 1993, the named fiduciaries started to increase investment in equities, and their policies continued to direct that asset allocations be weighted toward equities until early 2017.

Between 2003 and 2010, the court approved three plan decisions to move a total of 50 percent of CSPF's assets into passively-managed accounts (passive management typically seeks to match the performance of a specific market index and reduce investment fees).

An early-2017 investment policy change precipitated by CSPF's deteriorating financial condition will continue to move plan assets into fixed income investments ahead of projected insolvency, or the date when CSPF is expected to have insufficient assets to pay promised benefits when due. As a result, assets will be gradually transitioned from “return-seeking assets”—such as equities and emerging markets debt—to high-quality investment grade debt and U.S. Treasury securities with intermediate and short-term maturities. The plan is projected to become insolvent on January 1, 2025. CSPF officials and named fiduciary representatives said these changes are intended to reduce the plan's exposure to market risk and volatility, and provide participants greater certainty prior to projected insolvency.

GAO found that CSPF's investment returns and expenses were generally in line with similarly sized institutional investors and with demographically similar multiemployer pension plans. For example, GAO's analysis of returns using the peer group measure used by CSPF known as the Wilshire Associates' Trust Universe Comparison Service (TUCS), showed that CSPF's annual investment returns since 1995 were above the median about as many times as they were below. Similarly, comparing CSPF's returns to a peer group of similar multiemployer defined benefit plans using federally required annual reports found that CSPF's annual investment returns were in line with those of its peers. Specifically, CSPF's annual returns were above the median nine times and below it six times—and CSPF's overall (dollar-weighted) average annual return from 2000 through 2014 was close to that of the peer median average return of 4.8 percent.

In addition, GAO found that CSPF's investment fees and other administrative expenses have also been in line with other large multiemployer plans. For example:

Multiemployer plans are collectively bargained pension agreements often between labor unions and two or more employers. CSPF is one of the nation's largest multiemployer defined benefit pension plans, covering about 385,000 participants. Since 1982, the plan has operated under a court-enforceable consent decree which, among other things, requires that the plan's assets be managed by independent parties. Within 7 years, CSPF estimates that the plan's financial condition will require severe benefit cuts. GAO was asked to review the events and factors that led to the plan's critical financial status and how its investment outcomes compare to similar plans.

GAO describes (1) what is known about the factors that contributed to CSPF's critical financial condition; (2) what has been CSPF's investment policy, and the process for setting and executing it, since the consent decree was established; and (3) how CSPF's investments have performed over time, particularly compared to similar pension plans.

Brief History of the Consent Decree

In the 1970s, the U.S. Department of Labor (DOL), the Internal Revenue Service, and the U.S. Department of Justice investigated CSPF for alleged fiduciary breaches of requirements in the Employee Retirement Income Security Act of 1974 (ERISA). As a result of its investigation, DOL filed suit against former trustees of the plan, and, in September 1982, the parties entered into a court-enforceable consent decree. The consent decree provides measures to ensure that CSPF complies with the requirements of ERISA and allows for oversight of certain plan activities. The consent decree has been amended several times and currently remains in force.

Key Parties to the Consent Decree

CSPF – The consent decree reiterates that the plan must comply with ERISA and seek input from DOL and approval from the court for certain proposed actions, including the appointment of trustees to its board and the selection of named fiduciaries.
DOL – The consent decree allows DOL to request certain plan documents and comment on or object to certain plan activities.
U.S. District Court for the Northern District of Illinois, Eastern Division – The court oversees and enforces the consent decree and must approve certain proposed plan actions before they take effect.
Court-Appointed Independent Special Counsel – The consent decree provides for an independent special counsel to assist the court in overseeing the plan, attending meetings of the board of trustees, and submitting quarterly reports on plan activities to the court.
Named Fiduciaries – Independent asset managers, known as named fiduciaries, are selected by the plan’s trustees, subject to court approval, and have exclusive responsibility and authority to manage and control plan assets allocated to them.