The Renewable Fuel Standard program is unlikely to meet its targets for reducing greenhouse gas emissions and expanding the U.S. renewable fuels sector. Advanced biofuels—fuels that achieve the most greenhouse gas reductions—aren't being produced at the necessary levels, and they likely won't be by 2022.

Less than 5% of the 3 billion gallon cellulosic biofuel RFS target was produced in 2015, and additional investments for commercialization seem unlikely. (An earlier version of this summary used the term "advanced biofuel" instead of "cellulosic" and has been corrected.)

Experts cited multiple federal actions that could incrementally improve the investment climate for advanced biofuels, such as reducing uncertainty about the future of the RFS and tax credits.

Volumes of Advanced Biofuels to Be Blended into Domestic Transportation Fuel, as Set by the Renewable Fuel Standard Statute and by EPA, 2010 through 2017 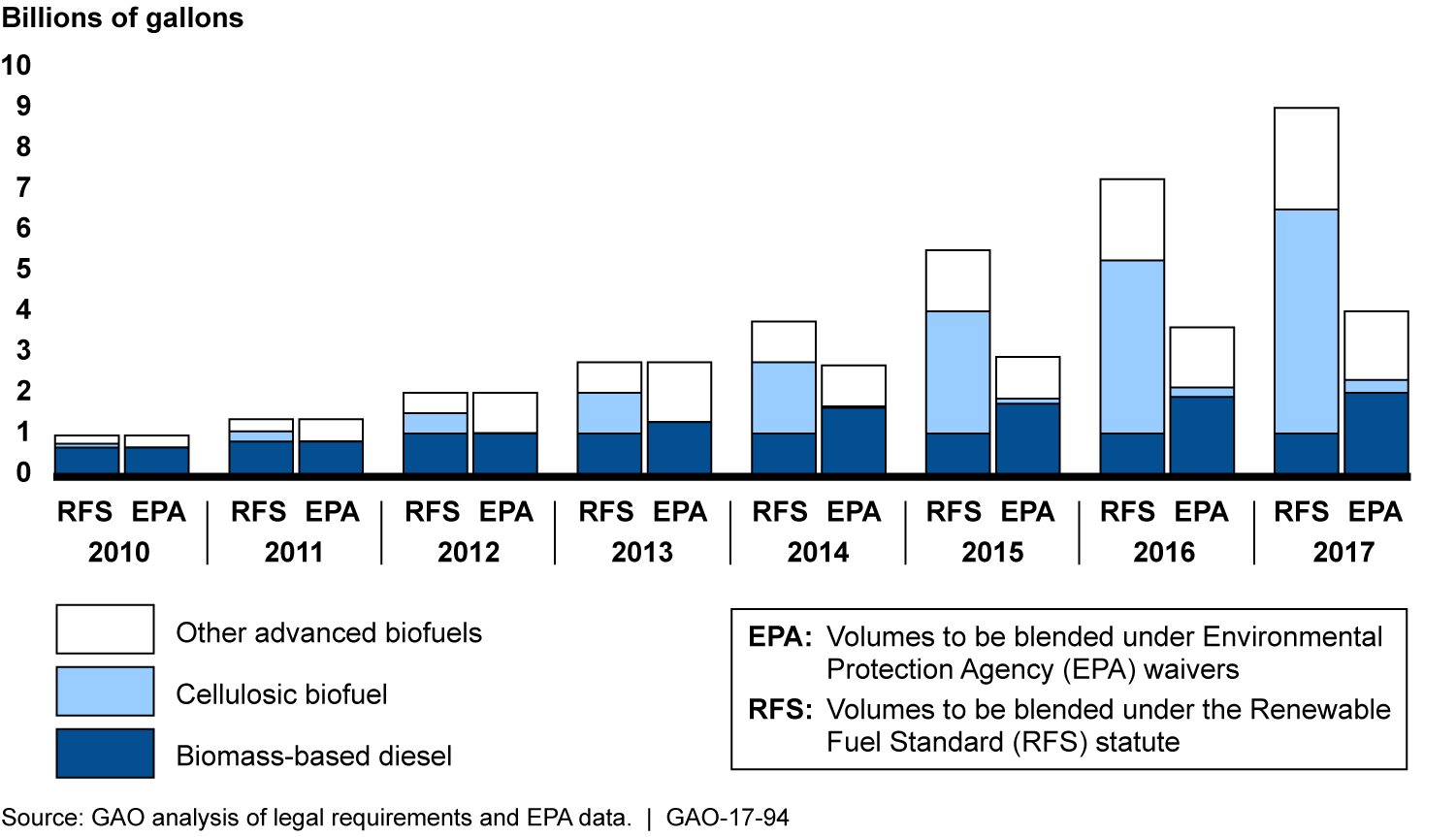 It is unlikely that the goals of the Renewable Fuel Standard (RFS)—reduce greenhouse gas emissions and expand the nation's renewable fuels sector—will be met as envisioned because there is limited production of advanced biofuels to be blended into domestic transportation fuels and limited potential for expanded production by 2022. Advanced biofuels achieve greater greenhouse gas reductions than conventional (primarily corn-starch ethanol), while the latter accounts for most of the biofuel blended under the RFS. As a result, the RFS is unlikely to achieve the targeted level of greenhouse gas emissions reductions. For example, the cellulosic biofuel blended into the transportation fuel supply in 2015 was less than 5 percent of the statutory target of 3 billion gallons. In part as a result of low production, EPA has reduced the RFS targets for advanced biofuels through waivers in each of the last 4 years (see figure). According to experts GAO interviewed, the shortfall of advanced biofuels is the result of high production costs, and the investments in further research and development required to make these fuels more cost-competitive with petroleum-based fuels even in the longer run are unlikely in the current investment climate.

Volumes of Advanced Biofuels to Be Blended into Domestic Transportation Fuel, as Set by the Renewable Fuel Standard Statute and by EPA, 2010 through 2017 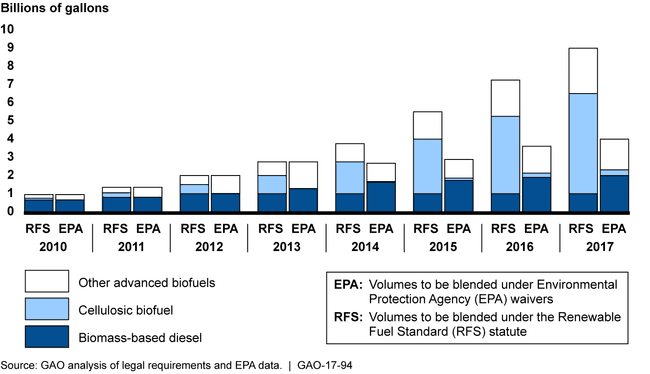 Note: As of September 2016, EPA volumes for 2017 are proposed, except for the biomass-based diesel volume for 2017, which is final.

Experts cited multiple federal actions that they suggested could incrementally improve the investment climate for advanced biofuels. For example, some experts told GAO that maintaining a consistent tax credit for biofuels, rather than allowing it to periodically lapse and be reinstated, could reduce uncertainty and encourage investment in advanced biofuels.

The RFS generally mandates that domestic transportation fuels be blended with increasing volumes of biofuels through 2022, with the goals of reducing greenhouse gas emissions and expanding the nation's renewable fuels sector while reducing reliance on imported oil. Annual targets for the volumes of biofuels to be blended are set by statute. EPA oversees the program and is responsible for adjusting the statutory targets through 2022 to reflect expected U.S. industry production levels, among other factors, and for setting biofuel volume targets after 2022. Biofuels included in the RFS are conventional (primarily corn-starch ethanol) as well as various advanced biofuels (including cellulosic ethanol and biomass-based diesel). Advanced biofuels emit fewer greenhouse gases than petroleum and corn-starch ethanol.

GAO was asked to review challenges to the RFS and their possible solutions. This report provides information on whether the RFS is expected to meet its goals, as well as expert views on any federal actions that could improve the RFS framework, among other things. GAO worked with the National Academy of Sciences to identify experts on issues related to the RFS. GAO interviewed these experts and analyzed their responses. This report also drew on published studies, and a companion report, GAO-17-108, that examined federal research and development in advanced biofuels and related issues. EPA generally agreed with the report.