The Department of Defense administers the Foreign Military Sales program, which sells military equipment and services to foreign partners and allies to help them improve their national security—and by extension, U.S. national security.

Congress has been concerned about how long foreign partners are waiting for the items and services they need.

While DOD has improved its responsiveness, it continues to fall short of its goals and has not assessed why. DOD also doesn't collect data on how long it takes to deliver the first item.

We made several recommendations to help DOD improve its performance data and analysis of the program. 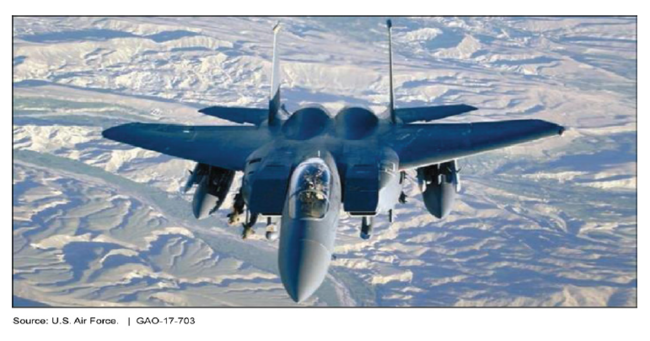 Photograph of an F-15 fighter jet in flight.

The Department of Defense's (DOD) performance on Foreign Military Sales (FMS) has improved, but DOD is not meeting two out of three performance metrics for the timely processing of FMS requests and does not collect data for the third metric. The first metric tracks the time taken from the receipt of a country's request for an item to when a Letter of Offer and Acceptance (LOA) is sent to the partner country for approval. As shown in the table, this metric is based on the complexity of the requests, and although DOD's timeliness has improved, it is still short of the 85 percent goal. The second missed metric is the time the Defense Security Cooperation Agency (DSCA) takes to review and approve FMS cases. The review time in 2016 was more than the 1 day goal. The third metric is the time DOD takes to deliver the first item to the recipient country; however, DSCA does not collect data on this metric and therefore does not know if it is meeting the goal. DOD officials cited several factors that adversely affect their ability to meet the timeliness goals, such as changing customer requirements or delays due to policy concerns regarding particular sales. However, because DOD has not collected data on one metric and has not identified the underlying causes for not meeting its goals, it does not know the extent to which these or other factors are impacting program delivery.

Note: The goal is for 85 percent of LOAs to be dispatched within the assigned number of days.

During fiscal years 2009 through 2016, the FMS workload increased and while the three military services' FMS workforces generally increased, DSCA's FMS workforce decreased. DSCA officials do not believe the size of their workforce has impacted timeliness; but the data provided to GAO shows that DSCA's timeliness has decreased as the size of its FMS workforce has decreased. A key principle of strategic workforce planning is that an agency's workforce must be aligned with its workload. However, DSCA lacks workload measures for its FMS workforce as a whole, and therefore cannot ensure that its workforce is sufficient to meet programmatic goals. Moreover, despite a DOD requirement, DSCA has not yet developed a workforce plan that could help identify any skill or competency gaps in its workforce. Officials said they planned to do so by the end of May 2018.

U.S. national security benefits from the timely provision of military equipment and services that enable foreign partners and allies to build or enhance their security capability. State has overall responsibility for the FMS program, while DOD administers the program through DSCA and implementing agencies in the military departments. Since 2009, DSCA has taken steps to improve the timeliness of the FMS process, but concerns remain that the delivery of FMS equipment is not timely, leaving foreign partners waiting for items needed to achieve security objectives.

House and Senate committees requested that GAO assess the FMS process. This report assesses (1) the extent to which DOD has met FMS timeliness goals, (2) FMS workload and workforce trends, and (3) actions DOD has taken to address recommendations to improve the FMS process made by GAO and others. GAO analyzed performance data for FMS from 2012 to 2016; workforce and workload data from the military departments; reviewed relevant DOD regulations and policies for FMS; and interviewed DOD officials.

GAO recommends that DSCA (1) collect data on delivery of items or services, (2) analyze FMS performance metric data to determine why goals have not been met, (3) develop a DSCA workforce plan, and (4) develop DSCA workload measures. DOD partially concurred with the first two recommendations, concurred with the third, and did not concur with the fourth. GAO continues to believe action is needed as discussed in the report.