Data from the Centers for Disease Control and Prevention indicate that

about 61% of gun deaths across all ages were suicides

By some estimates, there are guns in about a third of U.S. homes. We identified 16 public or nonprofit programs that promote safe gun storage to help keep those guns away from kids and people at risk of suicide.

These programs educate people about safe gun storage and some distribute free gun locks. Do they work? They haven't been well studied, but some research finds that giving away free locks can help improve home storage practices. 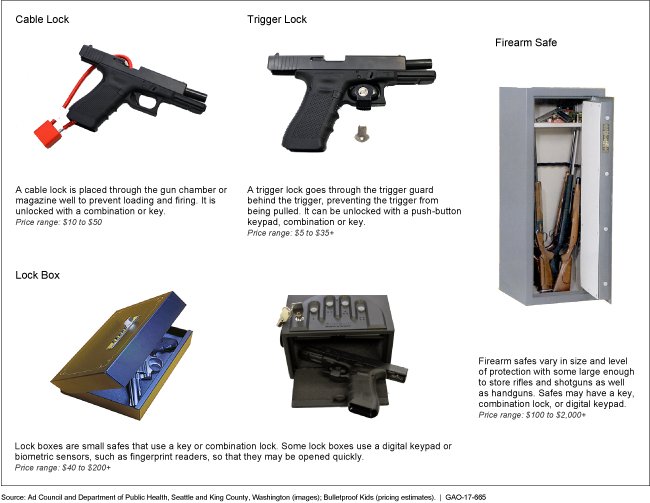 Photos and descriptions of a cable lock, a trigger lock, a firearm safe, and two types of lock boxes.

GAO identified 16 public or nonprofit programs that promote the safe storage of firearms on the national and local levels. These programs primarily involved education efforts through media campaigns and partnerships in the community. For example, the Bulletproof Kids program provides safe storage information to parents and assists pediatricians in discussing firearm safety with patients. (See figure.) Additionally, the New Hampshire Firearm Safety Coalition created partnerships among diverse perspectives to further a common goal of preventing firearm injuries and deaths through safe storage. This partnership helped the Coalition distribute suicide-prevention materials in gun shops statewide. In addition to education, four of the programs that GAO identified distributed free safe storage devices to gun owners. For example, the National Shooting Sports Foundation's “Project ChildSafe” has distributed 37 million free safety kits that include a firearm locking device, across the United States.

Program officials and researchers indicated that safe storage, as with other gun safety issues, has not been extensively studied. They cited a federal appropriations restriction on the Centers for Disease Control and Prevention's (CDC) use of funds to advocate or promote gun control as one explanation. GAO identified 12 studies that evaluated locking device distribution or physician counseling programs from GAO's literature review, as well as from discussions with researchers. These studies found that free lock distribution efforts influenced behavior to store firearms more safely, but these results were largely based on self-reports. Studies evaluating physician consultation presented mixed results. Some found that counseling in pediatric primary care visits did not change parents' storage behavior, but emergency care consultation following an adolescent psychiatric crisis did prompt parents to store firearms safely. In addition to these studies, GAO found that, of the 16 safe storage programs it identified, three evaluated aspects of their programs' effectiveness. The other 13 programs had not evaluated their effectiveness, but some provided data on the distribution of locking devices or educational materials.

According to data from CDC, an agency within the Department of Health and Human Services (HHS), among children under age 18, there were over 6,900 nonfatal firearm injuries seen in U.S. emergency departments and nearly 1,500 firearm-related deaths in 2015. CDC data also indicate that, across all ages, suicide accounted for about 61 percent of all firearm-related deaths in 2015. While safe firearm storage practices—such as keeping guns secured with a cable lock, or in a gun safe—reduce the risk of firearm injuries, estimates indicate that over one-quarter of household firearms are stored loaded and half of these are not kept locked.

GAO was asked to identify programs related to gun access and provide information on the effect of such programs. This report addresses (1) what is known about public and nonprofit programs that promote the safe storage of personal firearms at the national and local levels, and (2) the extent to which safe storage programs have been studied and the results of the research.

GAO interviewed officials at HHS and the Departments of Interior, Justice (DOJ), and Veterans Affairs (VA). GAO conducted a literature review related to safe firearm storage and interviewed researchers that it selected based on its firearm safety research and representatives of organizations sponsoring safe storage programs.