Oil and gas produced in the Gulf of Mexico are an important part of the nation's energy supply.

This testimony discusses oil and gas infrastructure in the Gulf, and how Interior oversees its decommissioning.

Examples of Oil and Gas Structures in the Gulf of Mexico 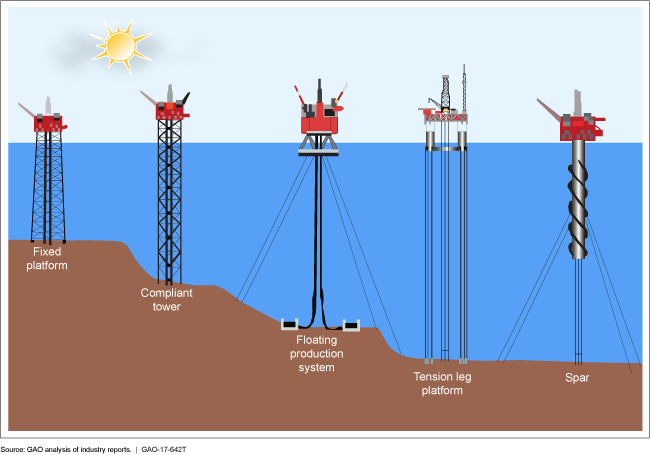 Graphic showing various oil and gas structures in the Gulf of Mexico.

As GAO reported in December 2015, offshore oil and gas infrastructure in the Gulf of Mexico (Gulf) varies in size and complexity, and lessees have installed and removed thousands of structures over the past half century. The simplest structures are found in shallow water and include a caisson, which is a cylindrical, large diameter steel pipe enclosing a well. A more complex structure in shallow water is a fixed platform, which uses a jacket and pilings to support the superstructure, or deck. A typical platform is designed so that multiple wells may be drilled from it. Structures in deep water rely on other methods to anchor to the ocean floor, such as using a narrow, flexible tower and a piled foundation. From 1947 through 2014, lessees drilled over 50,000 wells and installed over 7,000 structures in the Gulf. Over the same time period, lessees plugged almost 30,000 of these wells and removed about 5,000 of these structures. Oil production from deepwater wells increased significantly in recent decades, and in 2014, over 80 percent of Gulf oil production occurred in deep water.

Oil and gas produced on federal leases in the Gulf are important to the U.S. energy supply. When oil and gas infrastructure is no longer in use, Interior requires lessees to decommission it so that it does not pose safety and environmental hazards. Decommissioning can include plugging wells and removing platforms, which can cost millions of dollars. Interior requires lessees to provide bonds or other financial assurances to demonstrate that they can pay these costs; however, if lessees do not fulfill their decommissioning obligations, the federal government may be liable for these costs.

This statement describes offshore oil and gas infrastructure in the Gulf and Interior's requirements and procedures for overseeing decommissioning, and the risks posed by its financial assurances procedures. This statement is based on GAO-16-40 from December 2015. For that report, GAO reviewed agency regulations and procedures and interviewed officials from Interior, credit rating agencies, academia, and trade associations. GAO also followed up on the implementation status of the report's recommendations.