A 2012 outbreak of fungal meningitis raised concerns about state and federal oversight of drug compounding, which is the process of creating a drug tailored for an individual patient. To improve public safety, a 2013 law helped clarify FDA's authority to oversee this practice.

We found that FDA and some states collect data on the number of drug compounders, but not the volume of compounded drugs. Notably, nearly all of the states we surveyed reported having drug compounding laws or policies for pharmacists, but not for physicians. Additionally, some states reported challenges with their communication with FDA.

Preparing a Compounded Drug for an Individual Patient 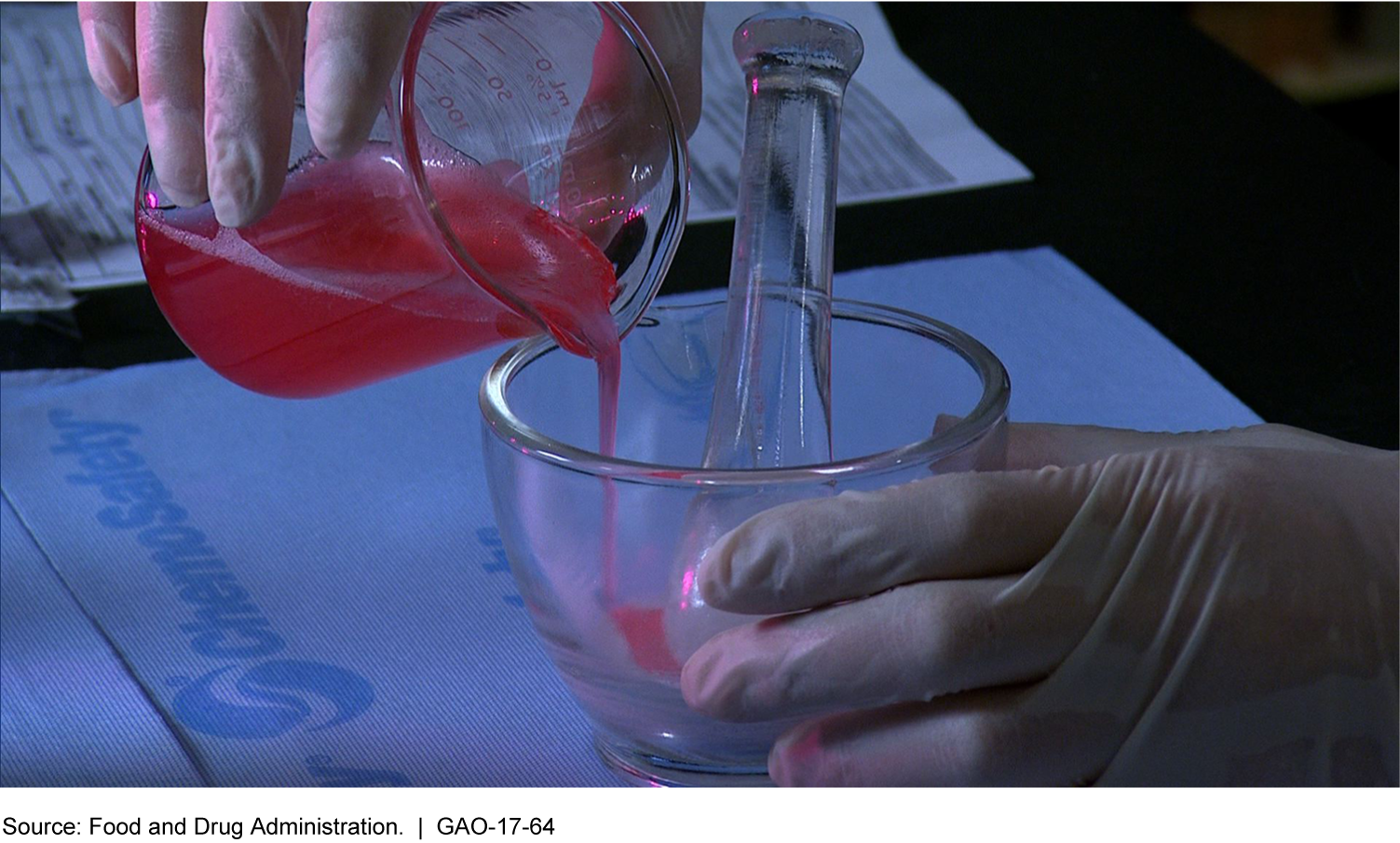 Photo of hands in medical gloves pouring red liquid into a glass mortar and pestle.

GAO's survey of state pharmacy regulatory bodies found that drugs are compounded in a variety of health care settings, and some data are collected on the number of entities that compound drugs (drug compounders), but not the volume of compounded drugs. In addition to pharmacies, drug compounding settings include physicians' offices and outsourcing facilities—a new type of facility established by law in 2013, which can compound sterile drugs without patient-specific prescriptions and register with and are inspected by the Food and Drug Administration (FDA), an agency within the Department of Health and Human Services (HHS). While FDA and some states collect data on drug compounders, only one state reported collecting data on the number of prescriptions or the volume of compounded drugs. In addition, states GAO surveyed and stakeholders GAO interviewed did not collect data specific to the extent of compounding performed by nonpharmacists, such as physicians.

Nearly all of the states GAO surveyed reported having drug compounding laws, regulations, or policies, though few apply to nonpharmacists, and states conduct inspections and can take actions to enforce them. Less than 20 percent of states reported having laws, regulations, or policies specific to compounding by nonpharmacists (e.g., physicians), and these state laws varied. To help ensure compliance, most states reported inspecting drug compounders, such as pharmacies and outsourcing facilities, and most states can take several types of actions against pharmacies, including monetary fines, and suspension and revocation of a license or registration.

FDA has taken steps to implement its regulatory responsibilities to oversee drug compounding, but states and stakeholder organizations have cited challenges and concerns. FDA has issued numerous draft and final guidance documents related to drug compounding, and conducted more than 300 inspections of drug compounders, which resulted in actions such as FDA issuing warning letters and voluntary recalls of potentially contaminated compounded drugs. Some stakeholder organizations said the amount of time it takes FDA to finalize the guidance and other documents—including those required by the 2013 law—is challenging. FDA officials noted that reviewing the large number of comments received has contributed to the time the agency has taken to finalize them. States and stakeholder organizations also cited concerns related to access to compounded drugs and differences between states and FDA on the appropriate inspection protocols to use when inspecting drug compounders. In August 2016, FDA changed its procedures to address concerns about the appropriate protocols to use for these inspections.

Drug compounding is the process of combining, mixing, or altering ingredients to create a drug tailored to the needs of an individual patient. An outbreak of fungal meningitis in 2012 linked to contaminated compounded drugs raised concerns about state and federal oversight of drug compounding. The Drug Quality and Security Act, enacted in 2013, helped clarify FDA's authority and included a provision for GAO to report on drug compounding.

GAO surveyed state pharmacy regulatory bodies in the 50 states, the District of Columbia, Guam, Puerto Rico, and the U.S. Virgin Islands (all but 4 completed the survey); reviewed documents and interviewed officials from FDA, 25 stakeholder organizations (including national pharmacy and medical associations), and agencies in 3 states selected for having differing laws and policies; reviewed relevant laws; and examined FDA data on drug compounding inspections and actions taken.

HHS provided general comments on a draft of this report, as well as technical comments, which were incorporated as appropriate.