Customs and Border Protection enforces customs and trade laws that protect the U.S. economy and the health and safety of the American people. CBP staff conduct trade enforcement activities at more than 300 ports by, among other things, collecting revenue, identifying noncompliant imports, and seizing prohibited goods, such as counterfeit drugs.

However, we found that CBP generally had not met the staffing levels set by Congress for trade positions and that these shortfalls could impact CBP’s ability to effectively enforce trade laws (e.g., fewer cargo inspections). We recommended that CBP develop a long-term hiring plan for trade positions. 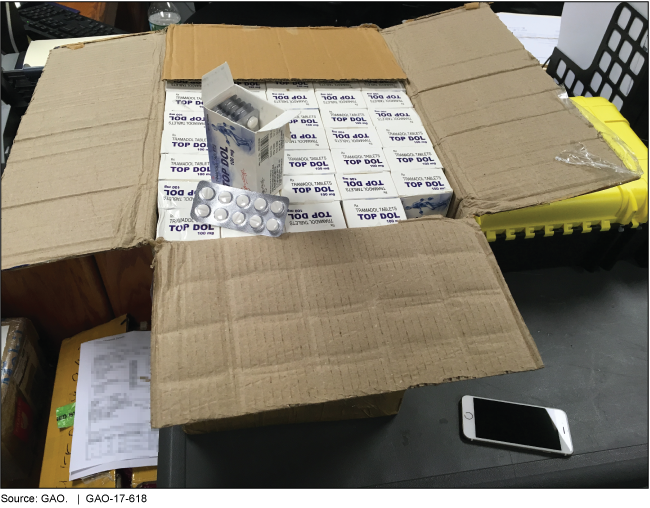 Photo of big box with packaged pills in it.

Two offices within U.S. Customs and Border Protection (CBP) enforce U.S. trade laws and protect revenue. The Office of Trade develops policies to guide CBP's trade enforcement efforts, while the Office of Field Operations conducts a range of trade processing and enforcement activities at U.S. ports. CBP's previously port-centric approach to trade enforcement has shifted to a national-level, industry-focused approach with the establishment of the Office of Field Operations' 10 Centers of Excellence and Expertise. These Centers represent a shift in trade operations, centralizing the processing of certain imported goods on a national scale through a single Center rather than individual ports of entry.

Counterfeit Goods Seized by U.S. Customs and Border Protection at a Port in New York

CBP conducts trade enforcement across seven high-risk issue areas using a risk-based approach, but its plans generally lack performance targets that would enable it to assess the effectiveness of its enforcement activities. Violations in the high-risk issue areas can cause significant revenue loss, harm the U.S. economy, or threaten the health and safety of the American people. CBP's trade enforcement activities reduce risk of noncompliance and focus efforts on high-risk imports, according to CBP. For example, CBP conducts targeting of goods, conducts audits and verifications of importers, seizes prohibited goods, collects duties, and assesses penalties. However, CBP cannot assess the effectiveness of its activities without developing performance targets as suggested by leading practices for managing for results.

Over the past 5 fiscal years, CBP generally has not met the minimum staffing levels set by Congress for four of nine positions that perform customs revenue functions, and it generally has not met the optimal staffing level targets identified by the agency for these positions. Staffing shortfalls can impact CBP's ability to enforce trade effectively, for example, by leading to reduced compliance audits and decreased cargo inspections, according to CBP officials. CBP cited several challenges to filling staffing gaps, including that hiring for trade positions is not an agency-wide priority. Contrary to leading practices in human capital management, CBP has not articulated how it plans to reach its staffing targets for trade positions over the long term, generally conducting its hiring on an ad hoc basis.

This is a public version of a sensitive but unclassified report that GAO issued in April 2017. Information that CBP deemed sensitive has been redacted.

In fiscal year 2015, CBP processed more than $2.4 trillion in imports through more than 300 ports of entry, collecting around $46 billion in revenue. CBP facilitates legitimate trade coming into the United States and enforces U.S. trade laws. CBP is tasked with collecting revenue and identifying harmful and noncompliant imports, such as counterfeit goods and goods that evade duties.

To strengthen its trade enforcement efforts, CBP should (1) include performance targets in its plans covering high-risk issue areas, and (2) develop a long-term hiring plan specific to trade positions that articulates how it will reach its staffing targets. CBP concurred with both recommendations.