Medicare spent $6.7 billion on durable medical equipment (generally, equipment that lasts at least 3 years) in 2015. Companies have developed disposable versions of some of these medical devices, such as insulin pumps, that could act as potential substitutes. We found that some of these disposable devices could potentially save money or result in better health outcomes compared to the durable versions in some cases, but they are not covered by Medicare.

We recommended that the Centers for Medicare & Medicaid Services evaluate the potential costs and savings of using disposable devices as substitutes for durable ones. 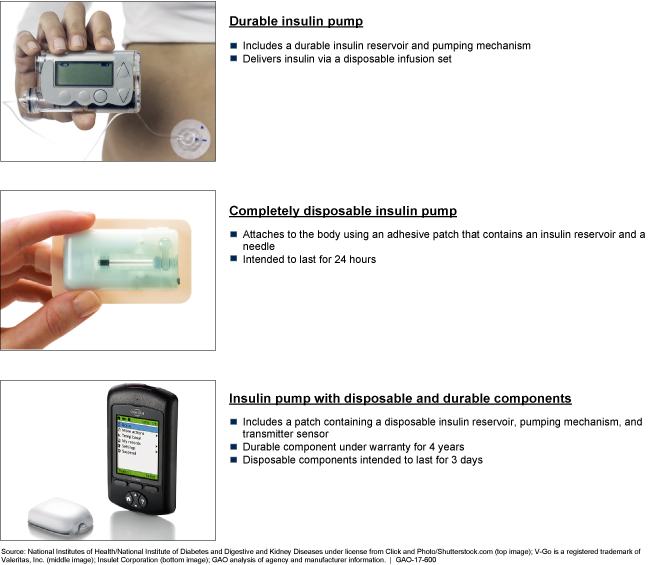 While disposable medical devices are generally not covered by Medicare, GAO identified eight that could potentially substitute for durable medical equipment (DME) items that are covered. These disposable DME substitutes fall into existing Medicare DME categories—infusion pumps, including insulin pumps; blood glucose monitors; sleep apnea devices; and nebulizers. Stakeholders GAO interviewed identified multiple benefits of using disposable substitutes, such as better health outcomes and potential cost-savings. However, they also cited factors that limit their use, including that these substitutes may not lead to cost-savings in all cases.

Stakeholders identified several market incentives, such as a growing demand, as reasons to develop disposable DME substitutes, but mostly cited lack of coverage by Medicare as a disincentive to development. Disposable DME substitutes are generally precluded from Medicare coverage under the DME benefit because they do not meet the Centers for Medicare & Medicaid Services' (CMS) regulatory definition of “durable”—able to withstand repeated use, with an expected lifetime of at least 3 years. Stakeholders noted this also decreases their chances of obtaining coverage from other insurers, which may follow Medicare payment policy. Some stakeholders noted that CMS's DME definition is a disincentive to technological innovation, and the agency has already faced challenges making coverage decisions with some devices. According to federal internal control standards, management should anticipate and plan for significant changes using a forward-looking process, but CMS officials said the agency has not considered the possibility of reexamining its definition. As a result, the agency may not be taking advantage of the potential benefits of these devices.

If Medicare coverage were expanded to include disposable DME substitutes, CMS would need to consider issues related to benefit category designation. GAO identified three possible options for covering disposable DME substitutes: an expansion of the current DME benefit, an expansion of the current home health benefit, or establishment of a new benefit category. The table lists the options GAO identified, which are not exhaustive. CMS would also need to consider its authority to provide for expanded coverage and evaluate potential reimbursement options.

In 2015, Medicare spent $6.7 billion for DME. CMS's definition of DME generally precludes potential disposable DME substitutes from coverage. Congress included a provision in law for GAO to review the potential role of disposable medical devices as substitutes for DME.

GAO recommends that CMS, within the Department of Health and Human Services (HHS), evaluate the possible costs and savings of using disposable devices as substitutes for DME, and, if appropriate, seek legislative authority to cover them. HHS stated that such an evaluation was premature. However, GAO continues to believe an evaluation is needed to help HHS anticipate and plan for significant changes using a forward-looking process.