The National Science Foundation makes awards to universities and other organizations to support research and education. NSF reimburses these organizations for direct costs, such as salaries and equipment, as well as indirect costs like rent and utilities—which are not necessarily tied to specific awards.

We testified that indirect costs for NSF awards ranged from 16 to 24 percent of total annual award funding from fiscal years 2000-2016. NSF has developed guidance for setting indirect cost rates, which determine the amounts that an organization may be reimbursed for indirect costs, but staff didn't consistently use this guidance. 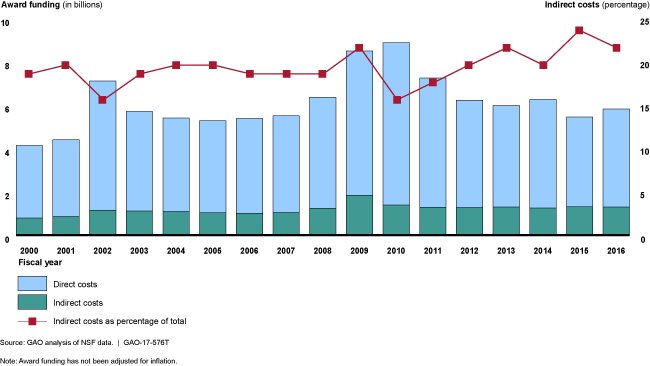 GAO's preliminary analysis of National Science Foundation (NSF) data indicates that for fiscal years 2000 through 2016, indirect costs on NSF awards ranged from 16 percent to 24 percent of the total annual amounts awarded, though the percentage generally has increased since 2010 (see fig.). NSF officials stated that variation in indirect costs from year to year can be due to a variety of reasons, such as the types of organizations awarded and the disciplinary field of awards. GAO's observations are based on data from planned budgets on individual NSF awards, rather than actual indirect cost expenditures, because NSF does not require awardees to report indirect costs separately from direct costs in their reimbursement requests. According to NSF officials, collecting such information would unnecessarily increase the reporting burden on awardees. 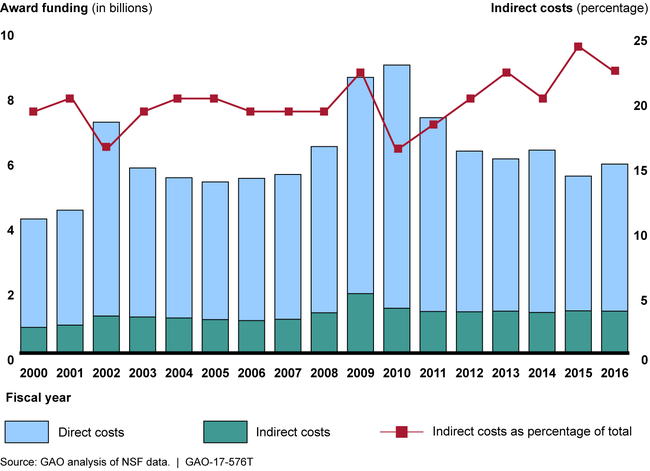 NSF reimburses awardees for direct and indirect costs incurred for most awards. Direct costs, such as salaries and equipment, can be attributed to a specific project that receives an NSF award. Indirect costs are not directly attributable to a specific project but are necessary for the general operation of an awardee organization, such as the costs of operating and maintaining facilities. For certain organizations, NSF also negotiates indirect cost rate agreements, which are then used for calculating reimbursements for indirect costs. Indirect cost rate negotiations and reimbursements are to be made in accordance with federal guidance and regulation and NSF policy.

This testimony reflects GAO's preliminary observations from its ongoing review that examines (1) what is known about NSF's indirect costs for its awards over time, and (2) the extent to which NSF has implemented guidance for setting indirect cost rates for organizations. GAO reviewed relevant regulation, guidance, and agency documents; analyzed budget data, a nongeneralizable sample of nine indirect cost rate files from fiscal year 2016 selected based on award funding; and interviewed NSF officials.