EPA estimates that addressing the nation's water infrastructure needs will take about $655 billion over the next 20 years. We looked at programs in 8 federal agencies that help communities plan for these needs, or provide funding to help address them.

For example, the Bureau of Reclamation has helped some communities assess their future water supply and demand. And the EPA and the U.S. Department of Agriculture provided over $4 billion in grants and loans to help pay for water infrastructure projects in 2016.

Previously, we recommended that EPA and USDA coordinate to limit any duplicate efforts, and they have taken steps to do so. 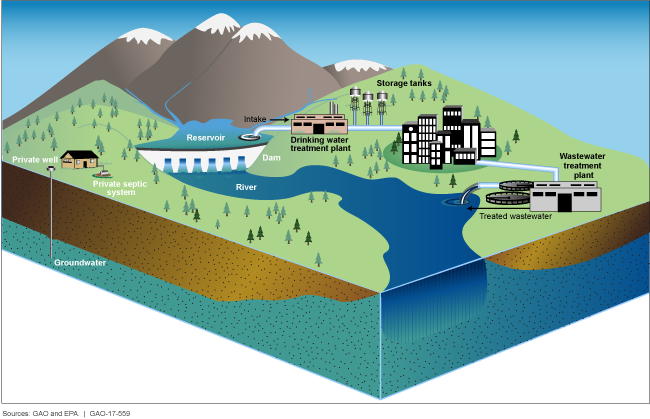 The Environmental Protection Agency (EPA) and other federal and selected state agencies collect information to identify drinking water and wastewater infrastructure needs through surveys, the administration of agency programs, and studies. EPA's most recent surveys estimated approximately $655 billion of drinking water and wastewater infrastructure needs nationwide over the next 20 years. The seven other agencies GAO reviewed—the departments of Agriculture (USDA) and Housing and Urban Development (HUD) and the Economic Development Administration, Indian Health Service, Bureau of Reclamation, U.S. Army Corps of Engineers, and Federal Emergency Management Agency (FEMA)—collect information on these needs by administering their programs. For example, the Corps collects information on congressionally authorized water projects. Of the six states GAO selected for review, all but Alaska and California had collected data on their needs such as through surveys of communities. For example, North Dakota biennially collects information on drinking water projects from its communities.

The Corps, Reclamation, and FEMA provide technical assistance and funding to support efforts in the six selected states to plan for future conditions that may affect drinking water and wastewater infrastructure needs. For example, the Corps helped Minnewaukan, North Dakota, identify alternatives for reducing flood risks to the city's drinking water and wastewater infrastructure, and Reclamation worked with Santa Fe, New Mexico, to study its projected water supply and demand. The remaining five agencies have at times been involved in long-term planning but do not have established programs for such purposes.

Federal and state agencies in the six selected states have taken actions to coordinate funding for projects while facing several challenges. For example, agencies in most of the selected states had established interagency coordinating groups that reached out to communities needing funding for projects. In some cases, agencies developed written agreements for their coordinating groups, with such goals as simplifying the application process and encouraging agencies to fund projects together. However, agencies in the selected states faced challenges, such as difficulty in developing a set of specific projects that were ready for funding, despite having infrastructure needs. For example, in the six selected states, USDA did not have enough applicants with projects that were developed to the extent needed to receive funding; therefore, USDA did not loan a total of about $193 million in available loan funds for fiscal years 2012 through 2016 to communities in those states. GAO found that federal and state agencies within selected states had taken some actions to help address challenges they faced in funding projects; these actions included conducting joint outreach to develop a set of projects ready for funding. EPA and USDA also have taken actions. For example, in February 2017 in response to a GAO recommendation in a prior report, EPA and USDA issued a joint memorandum outlining five practices to help improve interagency collaboration at the state level on drinking water and wastewater infrastructure projects; these practices include using common application materials and conducting joint marketing or outreach.

Events such as the discovery of lead in drinking water in Flint, Michigan, and the overflow and damage to the spillway at the Oroville Dam in California have drawn attention to the condition of the nation's drinking water and wastewater infrastructure. Conditions such as population growth or drought may further affect a community's needs and plans for such infrastructure.

GAO is not making recommendations in this report. Federal agencies and states provided technical comments on a draft of this report that GAO incorporated as appropriate.