Exposure to low doses of radiation may increase a person's risk of cancer. To help protect workers and the public against this risk, federal agencies set dose limits for power plants, issue guidance, and take other measures.

The Department of Energy and other agencies have also invested millions to better understand the health effects of low-dose radiation, but uncertainty remains. Given the reduction in funding for low-dose radiation research, agencies will need to work together to determine how to best use resources to address research priorities in the area.

We recommended that Energy lead efforts to enhance such interagency collaboration. 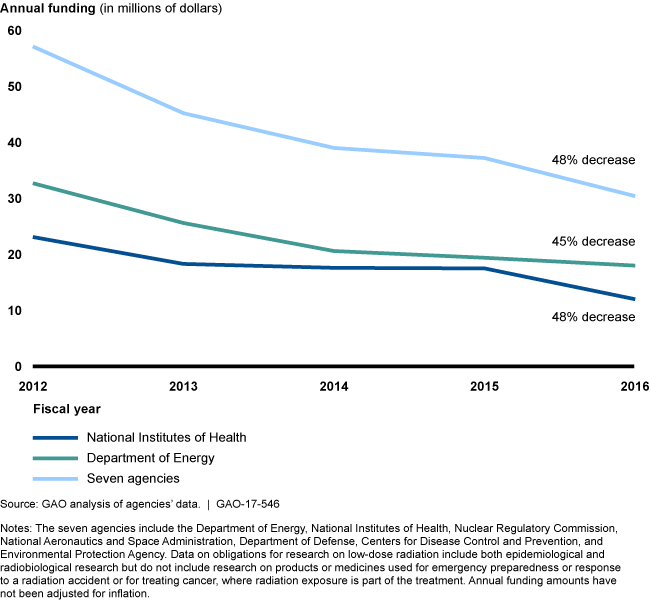 The Department of Energy (DOE), Nuclear Regulatory Commission (NRC), Environmental Protection Agency (EPA), and Food and Drug Administration generally used the advice of scientific advisory bodies to develop and apply radiation protection requirements and guidance for workers and the public in the radiation exposure settings that GAO reviewed. These settings were: (1) the operation and decommissioning of nuclear power plants; (2) the cleanup of sites with radiological contamination; (3) the use of medical equipment that produces radiation; and (4) accidental or terrorism-related exposure to radiation. Specifically, the agencies relied on the advice of three scientific advisory bodies that supported the use of a model that assumes the risk of cancer increases with every incremental radiation exposure. Accordingly, the agencies have set regulatory dose limits and issued guidance to confine exposure to levels that reduce the risk of cancer, while recognizing that scientific uncertainties occur in estimating cancer risks from low-dose radiation. For example, NRC requires nuclear power plants to consider measures for limiting workers' exposure below NRC's regulatory dose limit, such as by using robots for maintenance work in radiation areas.

GAO identified seven federal agencies that funded research on low-dose radiation's health effects. In fiscal years 2012 to 2016, DOE, NRC, EPA, and four other federal agencies obligated about $210 million for such research (see table). Although the agencies have collaborated on individual projects on radiation's health effects, they have not established a collaborative mechanism to set research priorities. GAO's previous work has shown that federal agencies can use such mechanisms to implement interagency collaboration to develop and coordinate sound science policies. In the past, DOE took a leading role in this area because DOE provided stable funding and advocated for greater coordination on research on low-dose radiation's health effects. However, since fiscal year 2012, DOE has phased out funding for one of its main research programs in this area. This has created a void in coordination efforts among federal agencies, and no other agency has stepped forward to fill this void. Because of DOE's prior experience as a leader in this area of research and its research responsibility under the Atomic Energy Act of 1954, it could play an important role in helping federal agencies establish a coordinating mechanism for low-dose radiation research.

Dollars are in millions and have not been adjusted for inflation

According to EPA, exposure to low doses of radiation does not cause immediate health effects but may increase a person's cancer risk. Federal agencies fund research on cancer risk, but uncertainties remain about risk assessments that federal agencies use to develop radiation protection regulations and guidance.

GAO selected four federal agencies, based on their development of requirements or guidance for settings in which radiation exposure to workers and the public can occur. GAO reviewed agency documentation and interviewed agency officials on the development of the requirements and guidance. GAO also collected and examined federal-funding data for low-dose radiation research from seven agencies that fund this research.

GAO recommends DOE lead development of a mechanism for interagency collaboration on research on low-dose radiation's health effects. DOE disagreed, stating that agencies set their own research priorities. GAO continues to believe that DOE is in the best position to lead such an effort, as discussed in the report.