Behavioral health conditions disproportionately affect low-income people. Some states expanded Medicaid to cover low-income adults, as authorized by the Affordable Care Act, so we examined how many people in this expansion group received behavioral health treatment.

In four states—Iowa, New York, Washington, and West Virginia—we found that in 2014:

Up to 1 in 3 Medicaid expansion enrollees received behavioral health treatment.

Psychotherapy visits and antidepressant medications were most commonly used.

In 3 states, enrollment in Medicaid likely increased access to this treatment (most enrollees in the 4th state already had access to it). 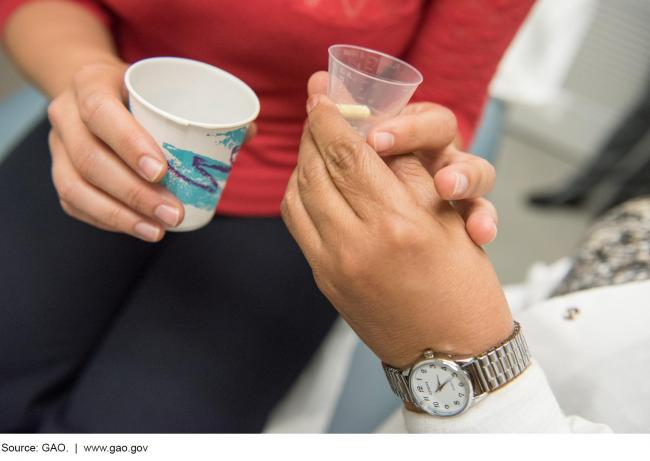 Photograph of a medical professional providing medicine to a patient.

Use of Behavioral Health Treatment among Medicaid Expansion Enrollees in Selected States, 2014

Behavioral health conditions disproportionately affect low-income populations. Treatment can improve individuals' symptoms and help avoid negative outcomes. The expansion of Medicaid to cover low-income adults in some states—authorized by PPACA—may have increased the demand for such treatment. However, little is known about the extent to which Medicaid expansion enrollees experienced behavioral health conditions or utilized treatment during the first year of expansion in 2014.

GAO selected four expansion states—Iowa, New York, Washington, and West Virginia—based on, among other criteria, availability and reliability of Medicaid enrollment and utilization data. GAO analyzed Medicaid data on behavioral health diagnoses and treatment use for expansion enrollees for 2014, the most recent year available. GAO also reviewed documents and interviewed Medicaid officials from all selected states to understand how data were recorded, and how treatment for expansion enrollees compared with what was available prior to expansion. The Department of Health and Human Services provided technical comments on a draft of this report, which GAO incorporated as appropriate.