NOAA collects hydrographic data on the depth and bottom configuration of water bodies to create nautical charts. The agency prepares an annual report comparing the cost of collecting data using its own fleet to the cost of procuring it from the private sector.

However, we found that NOAA didn't report complete cost data from fiscal years 2006 through 2016 in these reports. It also hasn't developed a strategy to expand its use of the private sector in its hydrographic survey program, as required by law.

We recommended that the agency fully track and report its cost data and develop a strategy for increasing its use of the private sector. 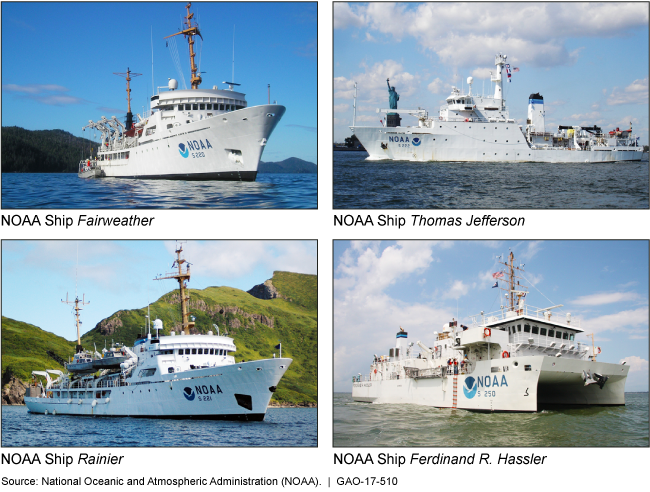 The Department of Commerce's National Oceanic and Atmospheric Administration (NOAA) uses a three-step process to determine its hydrographic survey priorities, according to agency documents and officials. NOAA first identifies areas in greatest need of surveying by analyzing data such as seafloor depth, shipping tonnage, and the time elapsed since the most recent survey. Second, the agency evaluates the availability of funding resources as well as the availability and capability of NOAA and private sector hydrographic survey vessels. Third, NOAA develops an annual hydrographic surveying plan that identifies survey priorities. To help inform the first step in this process, NOAA is developing a model to take advantage of new mapping technologies.

NOAA prepares an annual report comparing the cost of collecting its own hydrographic survey data to the cost of procuring data from the private sector but does not include all costs in its cost comparisons. Under its standard operating procedure, NOAA is to report the full cost of the hydrographic survey program, including equipment, maintenance, and administrative costs. GAO's review of NOAA's cost comparison reports from fiscal years 2006 through 2016, however, found that NOAA did not in all instances report complete or accurate cost data. For example, NOAA did not include the acquisition of a $24 million vessel in 2012, and in some cases it did not report certain costs in the year to which those costs should be assigned. NOAA officials said they recognized the need to improve the agency's tracking of costs, and they identified actions they intend to take but did not always provide information about specific steps to carry out these actions or associated time frames. For example, NOAA officials said they planned to implement an improved process in fiscal year 2019 for tracking the costs of capital assets such as vessels but did not identify specific steps to do so. They also said they plan to develop a system to better track maintenance costs but did not provide specific details or a time frame to do this. Without ensuring that its efforts to improve its cost comparison reports include actions to fully track asset and maintenance costs, NOAA may be unable to prepare cost comparison reports that reflect the full cost of its survey program, as specified in the agency's standard operating procedure.

NOAA has taken steps to increase private sector involvement in its hydrographic data collection program but has not developed a strategy for expanding such involvement as required by law. For example, NOAA moved to a centralized process for competing and awarding contracts, which NOAA officials said reduced administrative costs and contract award time and allowed NOAA to increase the number of private sector firms under contract from five to eight. However, NOAA did not develop a strategy for expanding its use of the private sector to minimize duplication and take maximum advantage of private sector capabilities, as required by law. NOAA officials said the agency intends to develop such a strategy but must first make improvements in its approach to comparing its own hydrographic survey costs to those of the private sector. However, NOAA officials did not provide specific information about how they intend to develop the strategy, what elements it will contain, or when it will be completed. Without developing such a strategy, NOAA may have difficulty minimizing duplication and taking advantage of private sector capabilities.

NOAA is responsible for collecting hydrographic data—that is, data on the depth and bottom configuration of water bodies—to help create nautical charts. NOAA collects data using its fleet and also procures data from the private sector. The Hydrographic Services Improvement Act of 1998 requires NOAA to acquire such data from the private sector “to the greatest extent practicable and cost-effective.”

GAO recommends that NOAA (1) ensure that its efforts to improve its cost comparison reports include actions to fully track asset and maintenance costs and (2) develop a strategy for expanding private sector involvement in the hydrographic survey program. NOAA agreed with GAO's recommendations.