To implement the federal crop insurance program, USDA partners with private insurance companies, which sell and service policies. In 2010, USDA negotiated a set rate of return with these companies—that is, how much companies can profit from these insurance policies.

However, we found that this expected rate of return was too high compared with market conditions. Reducing it could save the federal crop insurance program hundreds of millions of dollars a year.

We recommended that Congress consider directing USDA to adjust this expected rate of return. 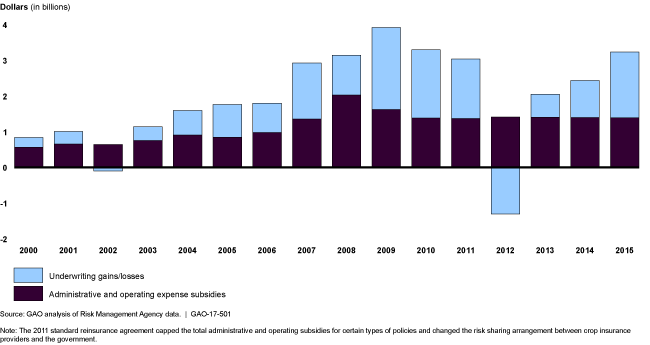 A graphic showing that in 14 of 16 years companies had underwriting gains.

The U.S. Department of Agriculture's (USDA) Risk Management Agency (RMA) makes payments to insurance companies to cover the cost of selling and servicing federal crop insurance policies. A cap on these payments stabilized them at about $1.4 billion per year from 2011 to 2015. In capping the annual payment to companies, RMA sought to make these payments more stable and dependable for companies and agents, but payments have fluctuated widely by crop, state, and county because, as GAO's analysis shows, the method RMA uses for calculating payments has allowed large fluctuations at the policy level. Specifically, RMA calculates payments based on such factors as crop price, and a price change can cause a change in the payments. For example, the average payment for almonds decreased by 42 percent from 2010 to 2011 but increased by 75 percent from 2013 to 2014. RMA could reduce such fluctuations and achieve greater stability by considering adjustments to how the payments are calculated when it negotiates a new agreement with companies.

However, a provision in the Agricultural Act of 2014 requires any changes negotiated for a new SRA be budget neutral. To realize savings, such changes would require congressional action to repeal this provision. If Congress were to direct RMA to adjust the target rate in future negotiations or assess the portion of premiums companies retain, the agency could generate significant cost savings for the program.

To implement the federal crop insurance program, USDA's RMA partners with private insurance companies, which sell and service policies. In 2010, USDA negotiated an agreement with insurance companies to set a national cap on the annual payments it makes to them for expenses and a target rate of return.

GAO was asked to examine (1) the changes in expense payments to companies due to the cap, (2) the extent to which the program's target rate of return reflects market conditions, and (3) opportunities for the federal government to reduce its delivery costs for the program. GAO analyzed RMA data on payments to companies for their expenses, conducted an updated analysis based on a USDA-commissioned study of the annual rate of return that companies should be expected to earn, and interviewed RMA officials.

Congress should consider repealing the Agricultural Act of 2014 provision that any revision to the agreement with insurance companies not reduce their expected underwriting gains and direct RMA to (1) adjust companies' target rate of return to reflect market conditions and (2) assess the portion of premiums that companies retain and adjust it, if warranted. GAO also recommends that RMA consider adjusting the method it uses to determine payments to insurance companies for expenses. RMA stated it will take steps to implement GAO's recommendation.