The labor market of the Commonwealth of the Northern Mariana Islands is growing and continues to largely rely on foreign workers. A 2007 law requires CNMI to eventually raise its minimum wage to the federal level ($7.25). About 62% of workers were affected by the 2016 wage hike to $6.55.

In 2015, foreign workers made up more than half of CNMI's workforce. The Department of Homeland Security aims to eliminate all work permits (CW-1 permits) that allow foreign nationals to work in CNMI by the end of 2019. However, our economic analysis estimated that without foreign workers, CNMI's 2015 gross domestic product would have been reduced by 26-62%. 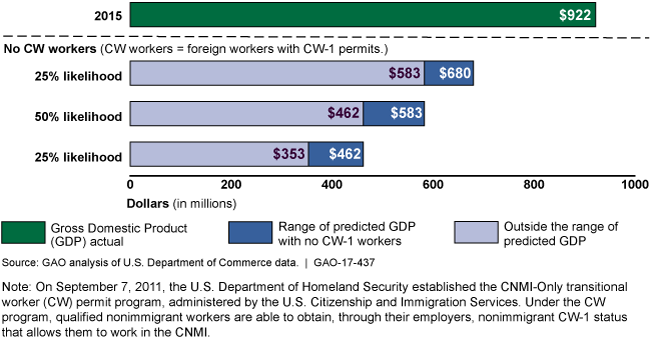 The Commonwealth of the Northern Mariana Islands' (CNMI) labor market has begun to grow after years of decline, while continuing to rely on foreign workers. By 2015, the number of employed CNMI workers was about 8 percent higher than in 2013, and inflation-adjusted average earnings had risen by 18 percent from 2007 levels. By 2016, about 62 percent of CNMI workers were directly affected by CNMI's minimum wage hike to $6.55 per hour. In 2015, foreign workers, who totaled 12,784, made up more than half of the CNMI workforce and filled 80 percent of all hospitality and construction jobs, according to GAO's analysis of CNMI tax data.

If all workers with CNMI-Only transitional worker (CW-1) permits, or 45 percent of total workers in 2015, were removed from the CNMI's labor market, GAO projects a 26 to 62 percent reduction in CNMI's 2015 gross domestic product (GDP)—the most recent GDP available. Demand for foreign workers in the CNMI exceeded the available number of CW-1 permits in 2016—many approved for workers from China and workers in construction occupations. The construction of a new casino in Saipan is a key factor in this demand (see photos taken both before and during construction in 2016). Meanwhile, by 2019, plans for additional hotels, casinos, and other projects estimate needing thousands of new employees. When the CW-1 permit program ends in 2019, available data show that the unemployed domestic workforce, estimated at 2,386 in 2016, will be well below the CNMI's demand for labor. To meet this demand, CNMI employers may need to recruit U.S.-eligible workers from the U.S. states, U.S. territories, and the freely associated states (the Federated States of Micronesia, Republic of the Marshall Islands, and Republic of Palau).

Construction of New Casino in Saipan, Commonwealth of the Northern Mariana Islands

Federal and CNMI efforts to address labor force challenges include (1) job training programs offered by Northern Marianas College, Northern Marianas Trades Institute, and the CNMI's Public School System; (2) employment assistance funded by the U.S. Department of Labor and implemented by the CNMI's Department of Labor; and (3) technical assistance provided by the U.S. Department of the Interior. In 2016, a U.S.–CNMI consultative process resulted in a report to Congress with six recommendations, including one to raise the cap on CW-1 foreign worker permits and extend the permit program beyond 2019.

A 2007 law required the minimum wage in the CNMI to rise incrementally to the federal level in a series of scheduled increases. GAO has been periodically required to report on the economic impact of the minimum wage increases in the territory. A 2008 law established federal control of CNMI immigration. It required the U.S. Department of Homeland Security (DHS) to create a transitional work permit program for foreign workers in the CNMI and to decrease the number of permits issued annually, and presently requires that DHS reduce them to zero by December 31, 2019. To implement this aspect of the law, in 2011, DHS created a CW-1 permit program for foreign workers.

In addition to the above statutory provisions, GAO was asked to review the implementation of federal immigration laws in the CNMI. Accordingly, this report examines (1) changes in the CNMI's labor market since the start of the federally mandated minimum wage increases, (2) the potential economic impact of reducing the number of foreign workers to zero, and (3) federal and CNMI efforts to address labor force challenges. GAO reviewed U.S. laws and regulations; analyzed government data; and conducted fieldwork in Saipan, Tinian, and Rota, CNMI. During fieldwork, GAO conducted semistructured interviews and discussion groups with businesses, CW-1 workers, U.S. workers, and current and former job training participants.

GAO is not making recommendations.