As part of its commitment to nonproliferation, the United States is planning to dispose of 34 metric tons of weapons-grade plutonium. The Department of Energy is looking into whether this plutonium could be diluted and disposed of at a geologic repository for defense waste in New Mexico.

Since this repository can only accept a limited amount of such waste, we recommended that the department develop a plan for expanding disposal space at this repository. 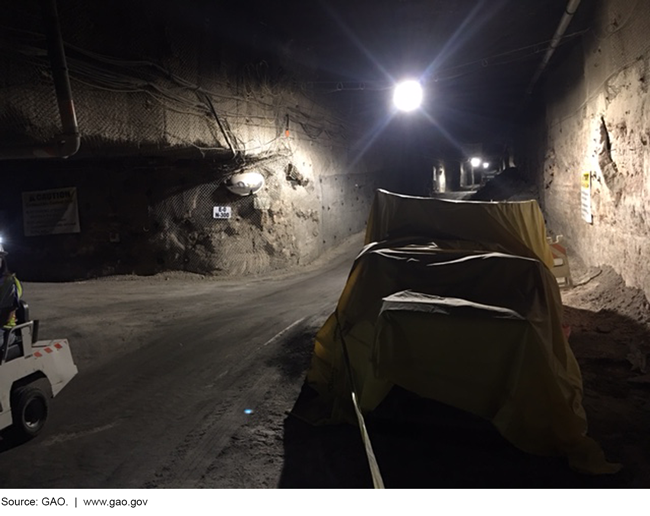 A photo inside of a tunnel at the defense waste repository in New Mexico.

In August 2016, the Department of Energy's (DOE) revised cost estimate for completing construction of the Mixed-Oxide (MOX) Fuel Fabrication Facility was approximately $17.2 billion and assumed annual funding of $350 million. This estimate substantially met best practices and can be considered reliable as it substantially met all four characteristics of a high-quality cost estimate: comprehensive, well-documented, accurate, and credible. In contrast, DOE's National Nuclear Security Administration (NNSA) has not yet applied best practices when revising its life-cycle cost estimate of $56 billion for the Plutonium Disposition Program using the MOX approach, as GAO previously recommended. This is because NNSA officials developed the revised life-cycle cost estimate to satisfy an annual requirement to record the plutonium environmental liability on departmental financial statements that were due in September 2016.

NNSA is developing a life-cycle cost estimate for completing the Plutonium Disposition Program using the dilute and dispose approach, which would dispose of diluted plutonium at DOE's Waste Isolation Pilot Plant (WIPP). WIPP is an underground repository for the disposal of transuranic (TRU) nuclear waste, which is waste contaminated by nuclear elements heavier than uranium, such as diluted plutonium. NNSA is currently assessing the extent to which any new equipment and facilities would be needed to pursue this approach, and it expects to develop an independently validated life-cycle cost estimate for the program by late 2018. NNSA has outlined an initial set of milestones for the program using the dilute and dispose approach; these milestones include program elements such as preparing the plutonium for dilution, diluting the plutonium into waste and securely storing it, and disposing of it at WIPP.

DOE does not have sufficient space at WIPP to dispose of all defense TRU waste. DOE's current plan is to fill the existing disposal space in WIPP by 2026, and additional space will need to be excavated to dispose of all the waste included in DOE's current TRU waste inventory report. While DOE officials recognize that expansion of WIPP's disposal space may be necessary in the future, they have not analyzed or planned for the facility's expansion because their focus has been on resuming operations at WIPP, which had been suspended in 2014 after two separate accidents at the facility. Specifically, GAO found the following:

Without developing a plan for WIPP that includes an integrated schedule for completing the regulatory approval process and constructing new space before WIPP's existing space is full, DOE does not have reasonable assurance that it will be able to expand the repository in a timely manner.

The United States has pledged to dispose of 34 metric tons of surplus, weapons-grade plutonium. The current U.S. approach relies on disposing of the plutonium by irradiating it as MOX fuel—a mixture of plutonium and uranium oxides—in modified commercial nuclear reactors. Due to a significant rise in cost, DOE recently proposed terminating the MOX approach in favor of the dilute and dispose approach, which DOE stated may be less expensive. Under this approach, plutonium would be diluted with inert material and then disposed of in a geologic repository.

GAO was asked to review DOE's planning for both the MOX and dilute and dispose approaches. This report examines: (1) the extent to which DOE's revised cost estimates for completing the construction of the MOX facility and for completing the overall Plutonium Disposition Program met best practices, (2) the status of NNSA's development of a life-cycle cost estimate for the dilute and dispose approach, and (3) the extent to which DOE has sufficient disposal space and statutory capacity at WIPP to dispose of all defense TRU waste, including waste from the dilute and dispose approach. GAO reviewed documents and interviewed DOE and NNSA officials, including officials from five major waste-generating sites.

GAO is making four recommendations, including that DOE develop a plan for expanding WIPP's disposal space that includes a schedule for completing the expansion before existing space is full. DOE concurs with the recommendations.