Avian influenza is an extremely infectious and potentially fatal disease in poultry. In 2014 and 2016, outbreaks in the U.S. led to the death of more than 50 million chickens, turkeys, and other birds, and cost billions of dollars.

Controlling avian influenza viruses in poultry is crucial to preventing those viruses from evolving to infect people.

The U.S. Department of Agriculture has taken actions to address lessons learned from its responses to the outbreaks, such as encouraging states to form response teams. However, it does not have a plan to evaluate the effectiveness its efforts. We recommended that USDA develop such a plan.

Approximate Number of Birds Killed as a Result of the 2014 Outbreak of Highly Pathogenic Avian Influenza, by State 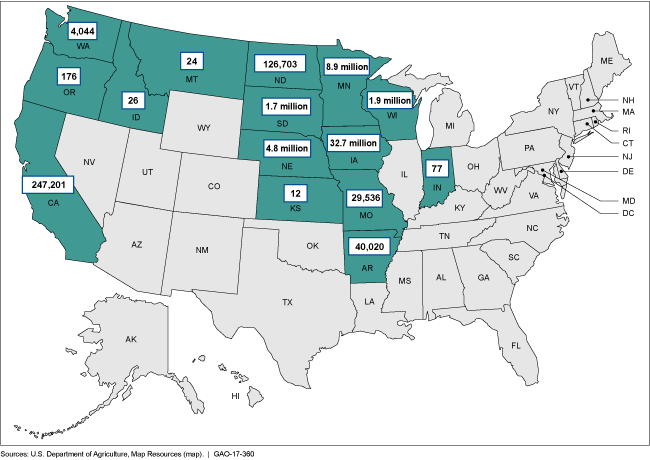 Over 50 million birds were killed because of the 2014 outbreak of highly pathogenic avian influenza.

When avian influenza outbreaks occur, they can have significant effects on human and animal health and the U.S. economy. With regard to human health, avian influenza rarely affects humans, but the World Health Organization estimates that two particular types of the virus have caused more than 2,100 human infections and more than 800 deaths since 1997, primarily in Asia and the Middle East. With regard to animal health, avian influenza outbreaks can lead to large numbers of poultry deaths as a result of efforts to control and prevent the spread of the disease. For example, from December 2014 to June 2015, more than 50 million birds were destroyed in the largest outbreak in U.S. history. The effect of avian influenza on the health of other animal species varies. Swine are susceptible to both avian and human influenza viruses that, if mixed, could create a new virus to which humans are vulnerable. An outbreak can also have significant economic consequences; for example, the economic impacts of the 2014 outbreak in the United States have been estimated to range from $1.0 to $3.3 billion.

USDA identified 15 areas with lessons learned from its responses to the 2014 and 2016 outbreaks of avian influenza and 308 associated corrective actions. For example, one lesson learned in the area of depopulation (mass culling of flocks) is that there were not enough skilled personnel available for depopulating infected poultry, leading to delays and possibly increasing the spread of disease. USDA has identified as completed about 70 percent of the 308 corrective actions to address all of the lessons learned. However, the agency has not evaluated the extent to which completed corrective actions—such as encouraging states to form depopulation teams—have helped resolve the problems identified, and it does not have plans for doing so. GAO has previously found that agencies may use evaluations to ascertain the success of corrective actions, and that a well-developed plan for conducting evaluations can help ensure that agencies obtain the information necessary to make effective program and policy decisions. Such a plan would help USDA ascertain the effectiveness of the actions it took to resolve problems identified during recent outbreaks.

On the basis of GAO's analysis of federal efforts to respond to outbreaks and of stakeholders' views, GAO identified ongoing challenges and associated issues that federal agencies face in mitigating the potential harmful effects of avian influenza. For example:

Avian influenza is an extremely infectious and potentially fatal disease in poultry. In 2014 and 2016, two outbreaks of avian influenza led to the deaths of millions of poultry in 15 states and prompted emergency spending to control the disease. While the health risk to humans is low, humans have been infected with these viruses, sometimes fatally. A spike in fatal human infections in Asia began in late 2016.

GAO was asked to review several issues related to avian influenza. This report examines (1) how outbreaks of avian influenza have affected human health, animal health, and the U.S. economy, (2) the extent to which USDA has taken actions to address any lessons learned from its responses to the outbreaks in 2014 and 2016, and how it plans to evaluate the actions' effectiveness, and (3) ongoing challenges and associated issues, if any, federal agencies face in their efforts to mitigate the potential harmful effects of avian influenza. GAO reviewed global and domestic data on the effects of avian influenza and USDA reports and corrective action data associated with its responses to the recent outbreaks, and interviewed federal officials and stakeholders from state agencies and the poultry industry.

GAO recommends that USDA develop a plan for evaluating the effectiveness of the corrective actions it has taken. USDA agreed with GAO's recommendation.