Conditions such as dense vegetation and drought have resulted in more severe wildland fires in recent years, and some communities are experiencing the devastating effects of these fires.

Federal agencies can collaborate with nonfederal stakeholders to reduce the risk of wildland fires. This is a key aspect of the National Cohesive Wildland Fire Management Strategy.

We recommended that federal agencies work with the Wildland Fire Leadership Council—which provides oversight and leadership for the strategy—to develop measures to assess progress toward achieving the strategy’s goals. 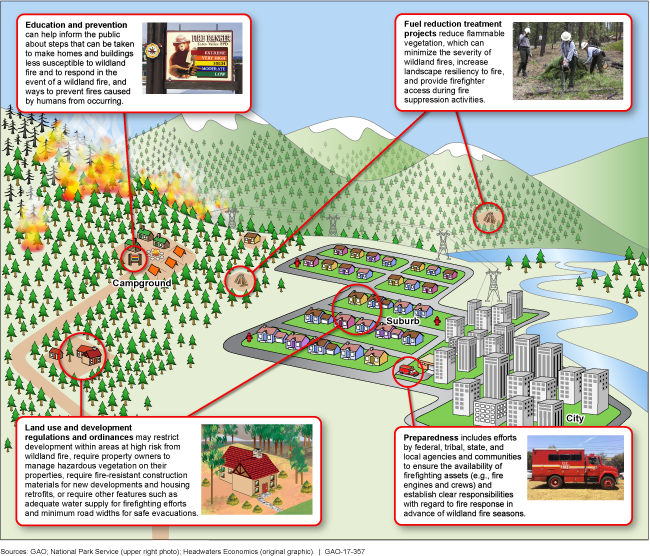 A graphic that shows the types of actions that can reduce the risk of wildland fires.

Officials GAO interviewed from the five federal agencies responsible for wildland fire management—the Forest Service within the Department of Agriculture and the Bureau of Indian Affairs, Bureau of Land Management, Fish and Wildlife Service, and National Park Service within the Department of the Interior—and nonfederal stakeholders, including state and local officials, homeowners, and representatives of nongovernmental organizations, identified several factors as affecting federal-nonfederal collaboration aimed at reducing wildland fire risk to communities. In some cases these factors were cited as enhancing collaboration, while in other cases they were cited as hindering it. Among the factors identified were federal authorities, agency initiatives, joint community-level planning, and others. For example, several officials and stakeholders cited laws such as the Good Neighbor Authority and Tribal Forest Protection Act of 2004 as enhancing collaboration because they provide federal and nonfederal entities the authority to work across jurisdictions on projects to reduce risk. In addition, several officials and stakeholders cited the 2014 National Cohesive Wildland Fire Management Strategy (Cohesive Strategy) as helpful for collaboration because it emphasizes the importance of coordination across multiple agencies and includes comprehensive fire management goals. In contrast, some officials and stakeholders said collaboration on certain types of projects was hindered by the difficulty in sharing project costs between federal and nonfederal entities.

Federal officials and nonfederal stakeholders also identified several actions they said could improve federal agencies' and nonfederal entities' ability to reduce wildland fire risk to communities. Among the actions cited was improving the implementation of the Cohesive Strategy. Some agency officials and stakeholders noted the importance of increasing accountability for implementing the Cohesive Strategy, such as through the use of performance measures. The strategy states that its success depends in part on monitoring and accountability, and calls for national outcome measures. This is consistent with previous GAO findings regarding national strategies. However, GAO found that the Wildland Fire Leadership Council (WFLC)—the interagency body charged with overseeing and implementing the Cohesive Strategy and which includes the Forest Service and Interior as members—has not developed measures to assess progress on the part of federal and nonfederal participants in meeting the national goals of the Cohesive Strategy. In 2013, WFLC proposed several measures but concluded that implementing them could place undue burden on the agencies and nonfederal partners. In 2016, however, WFLC reported that recent research findings could help quantify the strategy's effects over time. By working with WFLC to develop such measures, the Forest Service and Interior, together with federal and nonfederal partners, could better assess national progress toward achieving the goals of the Cohesive Strategy. Federal officials and nonfederal stakeholders also identified actions that, while not necessarily within the federal agencies' control, could be taken to reduce wildland fire risk to communities. For example, these actions include adopting state laws that require property owners to take risk-reducing actions such as using fire-resistant building materials or reducing vegetation around their homes. Some states have adopted laws to promote such actions.

Dense vegetation, drought, and other factors have resulted in more severe wildland fires in recent years. At the same time, development in and around wildlands continues to increase, with some communities experiencing devastating effects from wildland fire. To reduce risk to communities, federal agencies and nonfederal stakeholders can collaborate in various ways.

GAO reviewed laws and documents about collaboration on wildland fire management; compared agency efforts with guidance; and interviewed officials from a nongeneralizable sample of 10 federal land management units selected based on wildland fire potential, geographic diversity, and other factors. GAO also interviewed stakeholders including community members near the selected units and representatives of nonfederal entities involved in fire risk-reduction efforts.