The Tennessee Valley Authority, the nation's largest public power provider, provides electricity to more than 9 million customers. It raises billions in revenue but also issues bonds to finance its large capital investments (though it is subject to a $30-billion debt limit).

The TVA plans to reduce its debt by about $4 billion by 2023 by increasing rates and reducing expenses; it also plans to eliminate its unfunded pension liabilities.

However, we found that its debt reduction goals and plans haven't been reported as required. We recommended that it do so, and that it take steps to ensure that its pension plan is fully funded. 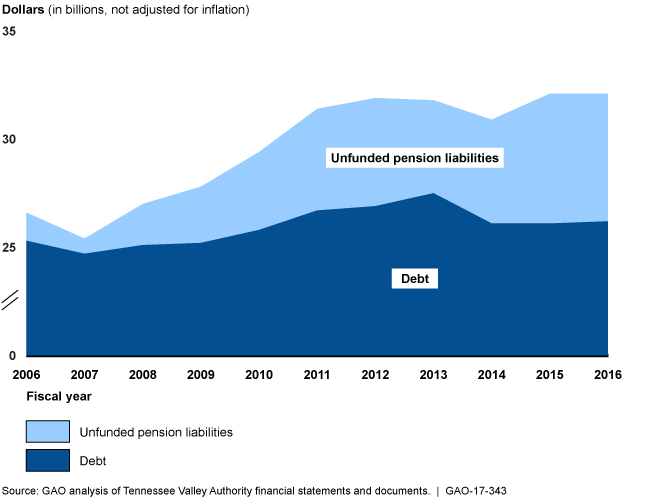 To meet its goal to reduce debt by about $4 billion—from about $26 billion in fiscal year 2016 to about $22 billion by fiscal year 2023—the Tennessee Valley Authority (TVA) plans to increase rates, limit the growth of operating expenses, and reduce capital expenditures. For example, TVA increased rates each fiscal year from 2014 through 2017 and was able to reduce operating and maintenance costs by about 18 percent from fiscal year 2013 to 2016. TVA's plans depend on assumptions that future capital projects will be completed on time and within budget, but TVA's estimated capital costs may be optimistic and could increase.

TVA's debt reduction plans and performance information are not reported in a manner consistent with the GPRA Modernization Act of 2010. Specifically, TVA identifies managing its debt and its unfunded pension liabilities as major management challenges but has not reported required performance information in its performance plans or reports on these challenges, thereby reducing transparency and raising questions about how it will meet its goal. As of September 30, 2016, TVA‘s pension plan was about 54 percent funded (plan assets totaled about $7.1 billion and liabilities $13.1 billion). While TVA's debt has remained relatively flat, its unfunded pension liabilities have steadily increased over the past 10 years, as shown below.

Several factors could affect TVA's ability to meet its debt reduction goal, including regulatory pressures, changes in demand for electricity, technological innovations, or unforeseen events. Also, TVA aims to eliminate its unfunded pension liabilities within 20 years, according to TVA officials. However, factors such as market conditions could affect TVA's progress, and no mechanism is in place to ensure it fully funds the pension liabilities if, for example, plan assets do not achieve expected returns. The TVA retirement system rules that determine TVA's required annual pension contributions do not adjust TVA's contributions to ensure full funding and TVA does not plan to contribute more than the rules require. Without a mechanism that ensures TVA's contributions will adequately adjust for actual plan experience, unfunded liabilities could remain and future ratepayers may have to fund the pension plan even further to pay for services provided to prior generations of ratepayers.

GAO was asked to review TVA's plans for debt reduction. This report examines (1) TVA's debt reduction goal, plans for meeting its goal, and key assumptions; (2) the extent to which TVA reports required performance information; and (3) factors that have been reported that could affect TVA's ability to meet its goal. GAO analyzed TVA financial data and documents and interviewed TVA and federal officials and representatives of stakeholder and industry groups.

GAO recommends that TVA (1) better communicate its plans and goals for debt reduction and reducing unfunded pension liabilities in its annual performance plan and report and (2) take steps to have its retirement system adopt funding rules designed to ensure the pension plan's full funding. TVA agreed with the first recommendation and neither agreed nor disagreed with the second. GAO believes that action is needed as discussed in the report.