To ensure that the nation's existing nuclear weapons remain safe and reliable, the National Nuclear Security Administration is working to modernize the nuclear weapons stockpile and its related infrastructure. Budget estimates for these efforts total about $301 billion from fiscal years 2017 to 2041. 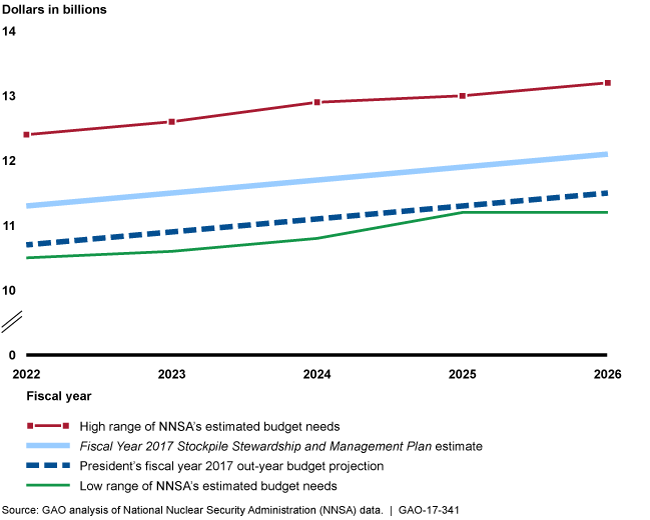 The National Nuclear Security Administration's (NNSA) overall nuclear modernization budget materials and plans for the next 25 years, as presented in the Fiscal Year 2017 Stockpile Stewardship and Management Plan , differ little from those in the fiscal year 2016 plan. Specifically,

Changes were made in the 25-year budget estimates for the Weapons Activities account as well as at the program level. Reasons for changes include movement of program funding to other areas. For example, the infrastructure area funding decreased 2.7 percent from fiscal year 2016 to fiscal year 2017, in part because about $6.5 billion in strategic materials sustainment funding was moved from the infrastructure area to the stockpile area.

In some cases, NNSA's fiscal year 2017 nuclear security budget materials do not align with the agency's modernization plans, both within the 5-year Future-Years Nuclear Security Program (FYNSP)—fiscal years 2017 through 2021—and beyond, raising concerns about the affordability of NNSA's planned portfolio of modernization programs. In particular, for some weapons refurbishments, the low end of NNSA's cost range estimates exceeds the estimates in the budget materials. For example, the W80-4 program's low-range cost estimate for fiscal year 2017 exceeds the budget estimate by about $26.9 million. In addition, the budget estimates for some modernization programs for fiscal years 2018 through 2021 are more than $5 billion below the funding levels NNSA has identified needing. If these needs are not met, NNSA may have to defer certain modernization work. Further, NNSA's budget estimates for fiscal years 2022 through 2026 may exceed out-year funding projections in the President's budget for those same years. GAO identified a similar funding gap in the prior year's budget materials. NNSA's fiscal year 2017 plan concludes that the modernization program is generally affordable in the years beyond the FYNSP, but this conclusion is optimistic, and the NNSA plan does not assess options to align future modernization plans and budgets with or without out-year funding increases. Portfolio management best practices developed by the Project Management Institute state that organizations can optimize their portfolios of programs and projects by assessing their capability and capacity to finance specific portfolio components; determining which portfolio components should receive the highest priority; and identifying components to be suspended, reprioritized, or terminated. By including an assessment of the affordability of its portfolio of modernization programs in future Stockpile Stewardship and Management Plans, NNSA could develop a plan that could bring its estimates of modernization funding needs into alignment with potential future budgets.

To ensure that the nation's existing nuclear weapons remain safe and reliable, the 2010 Nuclear Posture Review identified a set of long-term modernization goals for the nation's nuclear weapons stockpile that include sustaining a safe, secure, and effective nuclear arsenal and investing in a modern infrastructure. NNSA, which is responsible for the stockpile, is charged with carrying out these goals.

The National Defense Authorization Act for Fiscal Year 2011 includes a provision for GAO to report annually on NNSA's nuclear security budget materials. This is the sixth year that GAO has undertaken work in response to this provision. This report assesses the extent to which NNSA's fiscal year 2017 nuclear security budget materials (1) differ, if at all, from its budget estimates and plans for modernization activities as presented in its fiscal year 2016 budget materials and (2) align with NNSA's modernization plans.

GAO analyzed NNSA's fiscal year 2016 and 2017 nuclear security budget materials associated with those years' Stockpile Stewardship and Management Plans , and interviewed officials from NNSA and the Office of Management and Budget.

GAO recommends that NNSA include an assessment of the affordability of its portfolio of modernization programs in future versions of the Stockpile Stewardship and Management Plan . NNSA did not explicitly agree or disagree with the recommendation. GAO continues to believe that the recommendation is valid, as discussed in this report.