Foreign language proficiency is a key skill for U.S. diplomats. For example, it helps the State Department effectively process visa applications and address security concerns. Yet, we've found that State has persistent shortfalls in this area—23% of its overseas positions that required foreign language proficiency were filled by staff that didn't meet the requirements (as of September 2016).

State developed a strategic plan to address this issue, and it has implemented a number of actions in its plan. However, it hasn't evaluated if these efforts are effective at improving its foreign language capabilities. We recommended they do so. 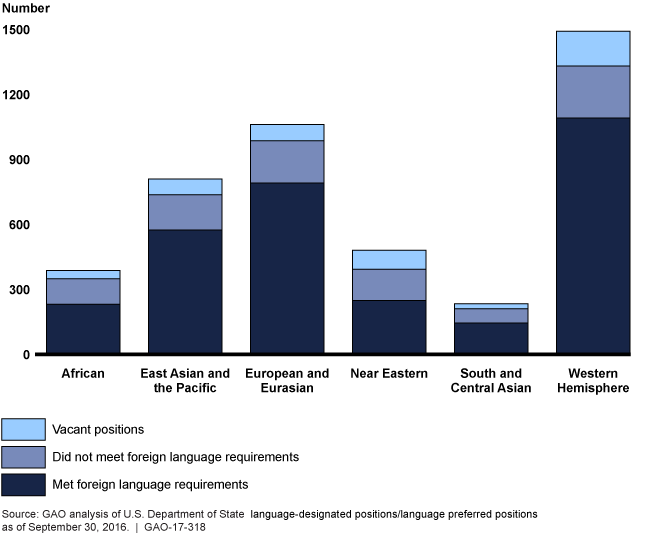 As of September 2016, 23 percent of overseas language-designated positions (LDP) were filled by Foreign Service officers (FSO) who did not meet the positions' language proficiency requirements. While this represents an 8-percentage-point improvement from 2008, the Department of State (State) still faces significant language proficiency gaps (see fig.). Regionally, the greatest gaps were in the Near East (37 percent), Africa (34 percent), and South and Central Asia (31 percent). According to FSOs we interviewed, language proficiency gaps have, in some cases, affected State's ability to properly adjudicate visa applications; effectively communicate with foreign audiences, address security concerns, and perform other critical diplomatic duties.

Percentages of Overseas Language-Designated Positions Filled by Officers Who Did Not Meet Proficiency Requirements as of September 2016, by Region

State reviews overseas posts' language needs every 3 years, but the extent to which the reviews' outcomes address these needs is unclear. State's policies indicate that operational need should determine the designation of positions as LDPs and required proficiency levels. However, views expressed by geographic bureau officials and FSOs whom GAO met at overseas posts suggest that other factors, such as staffing and cost concerns, influence State's decisions about LDP designations and proficiency requirements. State Human Resources officials noted that State is taking steps to better align its LDP policies with its operational needs.

State has implemented most actions described in its 2011 “Strategic Plan for Foreign Language Capabilities” but has not evaluated the effects of these actions on language proficiency at overseas posts. According to State’s evaluation policy, the department is committed to using performance management, including evaluation, to achieve the most effective foreign policy outcomes and greater accountability. Actions State has implemented under the plan include reviewing the language requirements of overseas posts every 3 years; offering recruitment incentives for personnel with proficiency in critically important languages; providing language incentive pay only for languages that reflect the department’s highest strategic priorities; and using technology to strengthen and develop new approaches for language training and to complement FSOs’ language skills. However, more than 5 years after it began implementing its strategic plan, State has not systematically evaluated the results of these efforts. As a result, State cannot determine the extent to which these efforts contribute to progress in increasing language proficiency worldwide and reducing proficiency gaps.

Proficiency in foreign languages is a key skill for U.S. diplomats to advance U.S. interests overseas. GAO has issued several reports highlighting State's persistent foreign language shortfalls. In 2009, GAO recommended that State, to address these shortfalls, develop a strategic plan linking all of its efforts to meet its foreign language requirements. In response, in 2011 State issued its “Strategic Plan for Foreign Language Capabilities.”

GAO recommends that the Secretary of State evaluate the effectiveness of efforts implemented under the “Strategic Plan for Foreign Language Capabilities.” State agreed with our recommendation.