Many states conduct Medicaid demonstrations, which allow them to test new approaches for delivering Medicaid services. The Centers for Medicare & Medicaid Services monitors spending under these demonstrations to ensure that the federal government does not pay more for them than it would have paid for the state's traditional Medicaid program.

We found that, over the last decade, Medicaid has spent increasing amounts on these demonstrations. We also found inconsistences in how CMS monitors these funds. 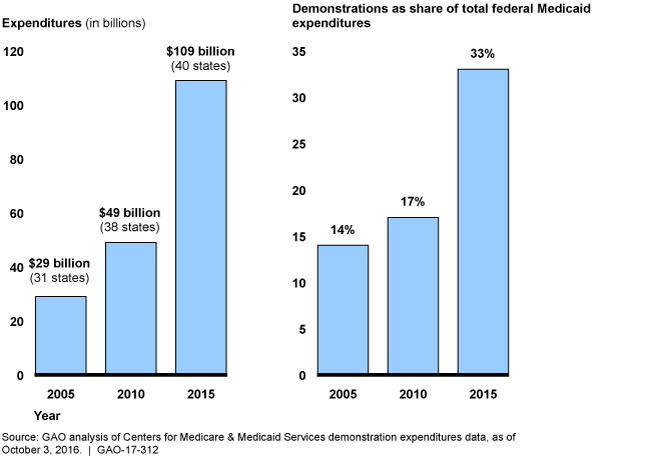 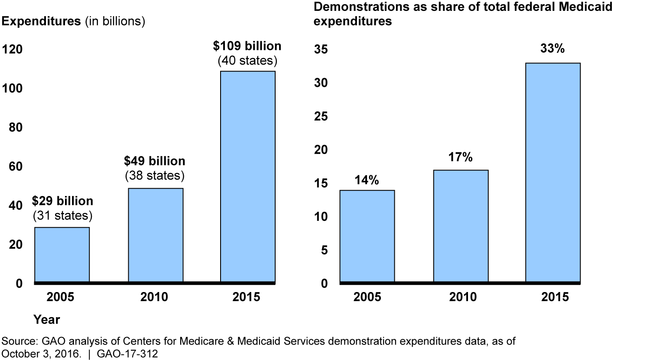 The Centers for Medicare & Medicaid Services (CMS), within the Department of Health and Human Services (HHS), took a number of steps to monitor demonstration spending in GAO's 4 selected states. However, GAO also found inconsistencies in CMS's monitoring process. For example, CMS did not consistently require selected states to report the information needed to assess compliance with demonstration spending limits. The inconsistencies may have resulted from a lack of written standard procedures. CMS officials told GAO that CMS was developing procedures to better standardize monitoring, but did not have detailed plans for doing so. Thus, it is too soon to determine whether these efforts will address the inconsistencies GAO found. Federal standards require that federal agencies design control activities to achieve objectives. Without standard, documented procedures, CMS may not identify cases where states are inappropriately using federal funds or exceeding spending limits.

In applying demonstration spending limits, CMS allowed states to accrue unspent funds (more specifically, unused spending authority) when state spending is below the limit and use them to finance expansions of the original demonstration. For example, CMS allowed New York to use $8 billion in unspent federal funds to expand its demonstration to include an incentive payment pool for Medicaid providers. In May 2016, CMS released a slide presentation outlining new restrictions on the accrual of unspent funds. Per federal standards, formal guidance helps ensure that policies are consistently carried out. However, CMS has not issued formal guidance on the policy and does not consistently track unspent funds under the spending limit, raising questions as to whether the revised policy will be effective in better controlling costs.

As of November 2016, 37 states had demonstrations under section 1115 of the Social Security Act, under which the Secretary of HHS may allow costs that Medicaid would not otherwise cover for state projects that are likely to promote Medicaid objectives. By policy, demonstrations must be budget neutral; that is, the federal government should spend no more for a state's Medicaid program than it would have spent without the demonstration. CMS is responsible for monitoring spending and assessing compliance with demonstration terms and conditions for how funds can be spent and applying spending limits to maintain budget neutrality.

GAO recommends that CMS (1) develop and document standard operating procedures for sufficient reporting requirements and to require consistent monitoring and (2) issue formal guidance on its revised policy for restricting accrual of unspent funds. HHS agreed with GAO's first recommendation and neither agreed nor disagreed with GAO's second recommendation.