90% of the nuclear waste in tanks at the Department of Energy's site in Hanford, WA is low-activity waste—it is much less radioactive than high-level waste.

To solidify low-activity waste for safe disposal, it can be mixed with

DOE plans to treat up to 1/2 of this low-activity waste with glass, but hasn't decided about the rest. Experts say grout is basically as safe and could speed completion. Other DOE sites use grout for similar waste.

Our recommendations are to help ensure that DOE treats the remaining waste based on the risk it poses, while also considering costs. 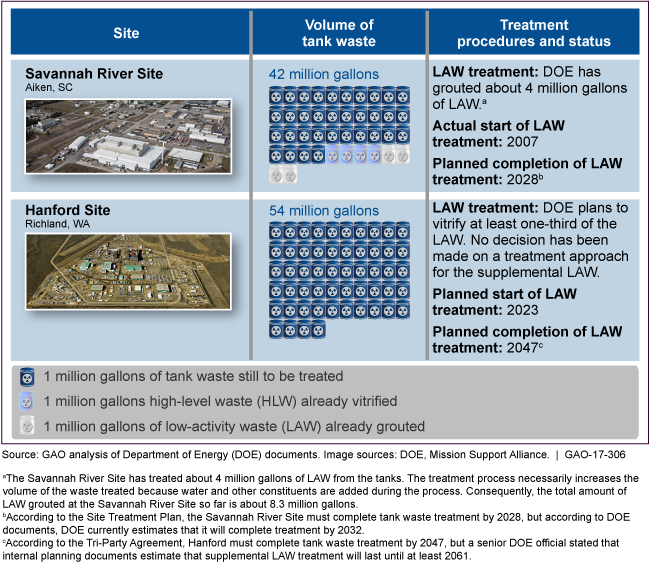 The Department of Energy (DOE) chose different approaches to treat the less radioactive portion of its nuclear weapons waste stored in tanks (tank waste)—which DOE refers to as “low-activity waste” (LAW)—at its two main cleanup sites, primarily in response to input from the two states. At the Savannah River Site, DOE and South Carolina agreed to use an existing facility to grout the site's LAW, a method that DOE determined could treat the waste faster and therefore address risks posed by prolonged storage of liquid waste in tanks sooner. Grout immobilizes waste in a concrete-like mixture. At Hanford, DOE is required by an agreement with the state and the Environmental Protection Agency to treat at least one-third to one-half of the site's LAW with a process called vitrification, which immobilizes the waste in glass. DOE chose vitrification in the 1990s with input from Washington state because studies at that time indicated that vitrification would be the most effective treatment approach for the conditions at Hanford. However, DOE has not yet determined how it will treat the remaining one-half to two-thirds of Hanford's LAW, known as “supplemental LAW,” a decision it has proposed making by 2018. Congress passed legislation in 2004 that clarified DOE's authority to manage the LAW at the Savannah River Site as low-level waste. Clarifying DOE's authority at Hanford, in a manner that does not impair the regulatory authorities of Washington state, to determine whether some portions of the supplemental LAW can be managed as low-level waste, could enhance DOE's ability to make risk-based decisions for supplemental LAW.

According to the 21 experts that attended GAO's meeting convened by the National Academies of Sciences, Engineering, and Medicine (National Academies), both vitrification and grout could effectively treat Hanford's LAW. These experts stated that current information shows that grout will perform better than was assumed when DOE made its decision to vitrify Hanford's LAW. According to some of the experts, using grout for supplemental LAW could help DOE complete its treatment mission sooner, reducing the environmental risks of leaving waste in tanks for long periods. Experts at GAO's meeting stated that developing updated information on the performance of treating Hanford's supplemental LAW with other methods, such as grout, may enable DOE to consider waste treatment approaches that accelerate DOE's tank waste treatment mission, thereby potentially reducing certain risks and lifecycle treatment costs. However, DOE has not developed current information on the performance of treating LAW with grout, or alternate methods, at Hanford, which is inconsistent with guidance developed by the National Research Council.

DOE oversees the treatment and disposal of about 90 million gallons of radioactive waste from the nation's nuclear weapons program. Most of this waste is stored in tanks at DOE sites in Hanford, Washington, and Savannah River, South Carolina. The less radioactive portion of the tank waste, called LAW, comprises more than 90 percent of the waste's volume but less than 10 percent of the total radioactivity. DOE has chosen different approaches for treating LAW at the two sites, but it has not made a final decision on how to treat Hanford's supplemental LAW.

GAO examined (1) DOE's reasons for choosing its treatment approaches for LAW at the Savannah River and Hanford Sites, (2) the status of DOE's treatment of LAW at these sites, and (3) experts' views on the likely performance of approaches for treating Hanford's LAW. GAO reviewed technical reports on DOE's waste treatment strategies at the two sites, interviewed DOE officials at headquarters and the sites, and convened an experts' meeting through the National Academies to discuss the effectiveness and risks of vitrification and grout.

Congress should consider specifically authorizing DOE to classify Hanford's supplemental LAW based on risk, consistent with existing regulatory authorities. GAO also recommends that DOE develop updated information on the performance of treating LAW with alternate methods, such as grout, before it selects an approach for treating supplemental LAW. DOE agreed with both recommendations.