The Nuclear Regulatory Commission's budget increased 59 percent from fiscal year 2005 through 2010 in anticipation of growth in the commercial nuclear industry. When this growth did not occur, NRC began to reduce its budget, with a decrease of 6 percent since 2010.

We found that some changes in NRC’s budget, such as how it budgeted for overhead, had the unintended consequence of appearing to increase the agency's overhead costs. Also, NRC’s budget has created confusion about how it spends its funds. NRC has made additional changes to its budget recently and plans to provide more information on prior year spending. 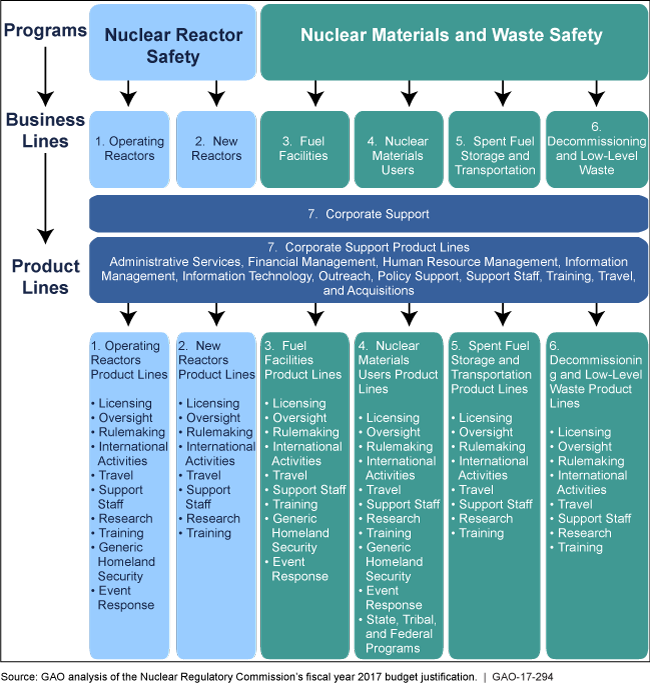 The Nuclear Regulatory Commission (NRC) formulates its agencywide budget using estimates developed by its offices, and its budget structure changed twice from fiscal years 2010 through 2017. NRC's budget formulation consists of (1) its internal budget process, during which NRC management develops planning guidance, offices develop budget requests, and management and offices work together to develop an agencywide budget, and (2) its external budget process, during which NRC obtains external review from the Office of Management and Budget to finalize its budget, which goes forward to Congress as part of the President's budget request for that fiscal year. From fiscal years 2010 through 2017, NRC made two major changes to how it organized its budget structure, the first of which created confusion among users of NRC's budget requests—such as Congress and licensees—and contributed to increased congressional scrutiny of NRC costs. For example, in the requests for fiscal years 2011 and 2012, NRC changed how it budgeted for overhead; this change had the unintended consequence of appearing to significantly increase NRC's costs associated with overhead, according to the agency. NRC attempted to address these concerns and improve transparency as part of its second budget structure change, which NRC implemented starting with the fiscal year 2016 budget request for NRC and which it completed in the fiscal year 2017 request. Fiscal year 2017 was just beginning as GAO finished its audit work, so it was too early to determine whether these changes improved transparency or lowered overhead costs. During the budget structure changes from fiscal years 2010 through 2017, NRC's primary budget formulation guidance was not up to date. NRC updated this guidance in August 2016, nearly 30 years after it was originally issued, and established a process to regularly update its directives.

NRC is an independent agency that regulates civilian uses of nuclear materials in the United States. From fiscal years 2005 to 2010, NRC's budget and workforce increased by about 59 percent and about 27 percent, respectively, in anticipation of growth in the commercial nuclear industry. When this growth did not occur, NRC made plans to reduce its budget and workforce. However, Congress and licensees—the companies regulated by NRC—have expressed confusion about the annual budget request for NRC, and they say they cannot determine specifically how NRC plans to spend its appropriations.

The explanatory statement accompanying the Consolidated Appropriations Act, 2016, included a provision for GAO to review NRC's budget formulation process. This report examines (1) how NRC formulates its budget and how its budget structure changed for fiscal years 2010 through 2017 and (2) the extent to which NRC's budget justification aligns with its budget execution and reflects the agency's use of funds for prior years.