Effective oversight of offshore oil and gas development is critical to preventing another Deepwater Horizon-type disaster.

However, the Department of the Interior's Bureau of Safety and Environmental Enforcement has struggled to successfully implement key initiatives to improve offshore oversight. For example, a risk-based facility inspection initiative was halted due to concerns about its usefulness and unclear protocols.

In an earlier version, the capping stack was incorrectly referred to as a blowout preventer. A capping stack caps a well after a blowout to stop the uncontrolled flow of oil. 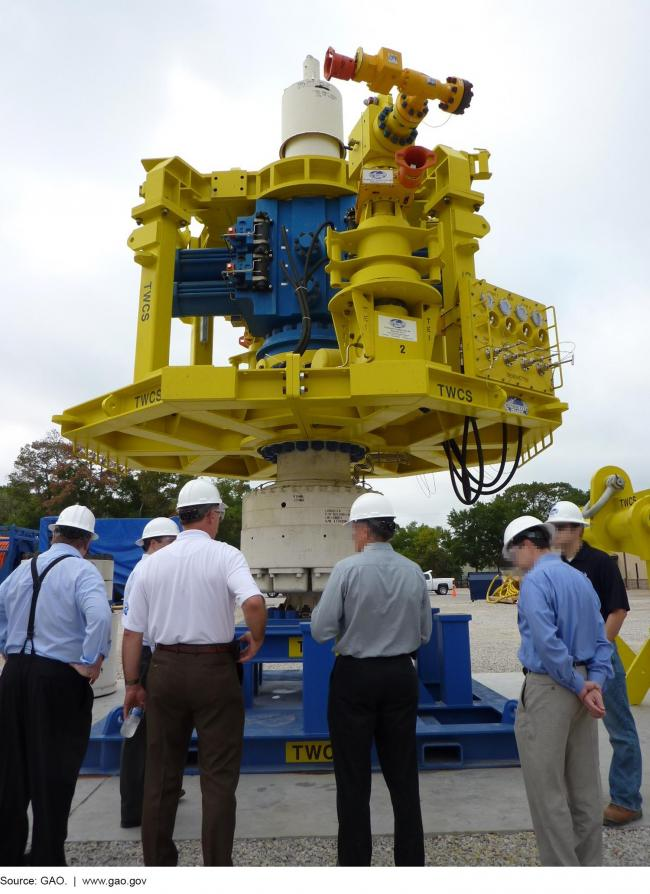 Photo of a blowout preventer

The Department of the Interior's (Interior) Bureau of Safety and Environmental Enforcement (BSEE) leadership has started several key strategic initiatives to improve its offshore safety and environmental oversight, but its limited efforts to obtain and incorporate input from within the bureau have hindered its progress. For example, to supplement its mandatory annual regulatory compliance inspections, in 2012, BSEE leadership began developing a risk-based inspection initiative to identify high-risk production facilities and assess their safety systems and management controls. During pilot testing in 2016, several deficiencies—including the usefulness of its facility risk-assessment model and unclear inspection protocols—caused BSEE to halt the pilot. According to bureau officials, during the development of the initiative, BSEE headquarters did not effectively obtain and incorporate input from regional personnel with long-standing experience in previous risk-based inspection efforts, who could have identified deficiencies earlier in the process. GAO previously found that when implementing large-scale management initiatives a key practice is involving employees to obtain their ideas by incorporating their feedback into new policies and procedures. Instead, BSEE leadership appears to have excluded the input of regional personnel by, for example, not incorporating input beyond the risk-assessment tool when selecting the first pilot facility, even though it was prescribed to do so in the bureau's inspection planning methodology. This undercut the pilot effort, raising questions about whether the bureau's leadership has the commitment necessary to successfully implement its risk-based program. Without higher level leadership within Interior establishing a mechanism for BSEE to obtain and incorporate input from personnel within the bureau, BSEE's risk-based inspection initiative could face continued delays.

On April 20, 2010, the Deepwater Horizon drilling rig exploded in the Gulf of Mexico. The incident raised questions about Interior's oversight of offshore oil and gas activities. In response, in May 2010, Interior reorganized its offshore oil and gas management activities, and in October 2011, created BSEE to among other things, develop regulations, conduct inspections, and take enforcement actions. In February 2011, GAO added the management of federal oil and gas resources to its High-Risk List. In December 2015, BSEE issued a strategic plan outlining initiatives to improve offshore safety and environmental oversight as well as its internal management.

This report examines what efforts BSEE leadership has made in implementing key strategic initiatives to improve its (1) offshore safety and environmental oversight and (2) internal management. GAO reviewed laws, regulations, policies, and other documents related to the development of BSEE's strategic initiatives. GAO also interviewed BSEE officials.

GAO is making four recommendations, including that higher-level leadership within Interior (1) establish a mechanism for BSEE management to obtain and incorporate input from bureau personnel that can affect the bureau's ability to achieve its objectives and (2) address leadership commitment deficiencies within BSEE, including by implementing internal management initiatives and ongoing strategic initiatives in a timely manner. Interior neither agreed nor disagreed with our recommendations.