PTSD and traumatic brain injury can affect the behavior of servicemembers in the Armed forces and may lead to separations for misconduct. We examined misconduct separations and found that servicemembers diagnosed with PTSD, TBI, or certain other conditions can receive an "other than honorable" discharge—making them potentially ineligible for VA health benefits. 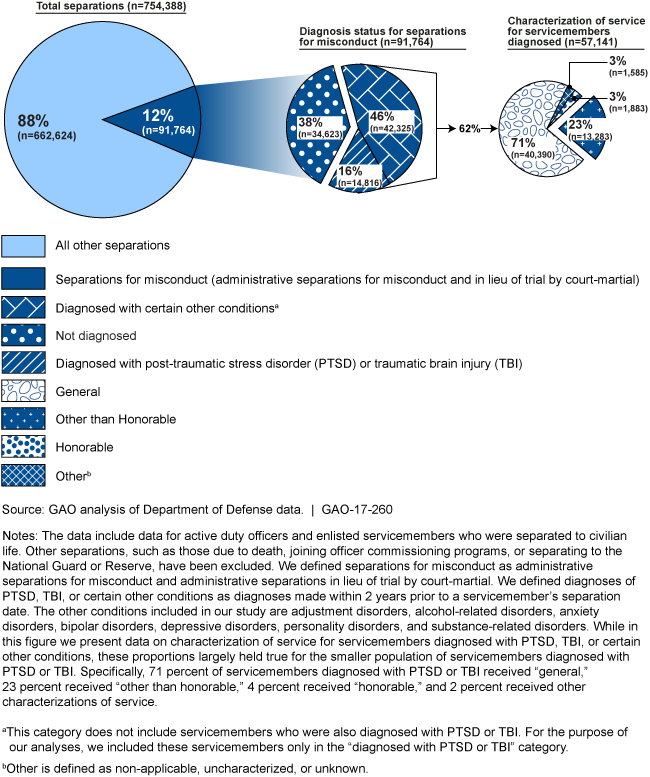 GAO's analysis of Department of Defense (DOD) data show that 62 percent, or 57,141 of the 91,764 servicemembers separated for misconduct from fiscal years 2011 through 2015 had been diagnosed within the 2 years prior to separation with post-traumatic stress disorder (PTSD), traumatic brain injury (TBI), or certain other conditions that could be associated with misconduct. Specifically, 16 percent had been diagnosed with PTSD or TBI, while the other conditions, such as adjustment and alcohol-related disorders, were more common. Of the 57,141 servicemembers, 23 percent, or 13,283, received an “other than honorable” characterization of service, making them potentially ineligible for health benefits from the Department of Veterans Affairs (VA).

GAO found that the military services' policies to address the impact of PTSD and TBI on separations for misconduct are not always consistent with DOD policy. For example, contrary to DOD policy, Navy policy does not require a medical examination—or screening—for certain servicemembers being separated in lieu of trial by court-martial to assess whether a PTSD or TBI diagnosis is a mitigating factor in the misconduct charged. This type of separation occurs when a servicemember facing a trial by court-martial requests, and is approved, to be discharged administratively. In addition, GAO found that two of the four military services have TBI training polices that are inconsistent with DOD policy.

Finally, while Army and Marine Corps have some available data on servicemembers' screenings, training, and counseling, the military services do not use these data to routinely monitor whether they are adhering to relevant policies. Federal internal control standards call for agencies to establish monitoring activities to ensure internal control systems and evaluate results. Without monitoring adherence to these policies, the military services cannot provide assurance that servicemembers with PTSD and TBI are receiving adequate consideration of their conditions as well as the services DOD has established for them.

The Carl Levin and Howard P. “Buck” McKeon National Defense Authorization Act for Fiscal Year 2015 contains a provision that GAO examine the effect of PTSD, TBI, and certain other conditions on separations for misconduct. This report examines (1) the number of servicemembers separated for misconduct who were diagnosed with PTSD, TBI, or certain other conditions and were potentially ineligible for VA benefits and services; (2) the extent to which military services' policies to address the impact of PTSD and TBI on separations for misconduct are consistent with DOD's policies; (3) the extent to which Army and Marine Corps have adhered to their policies; and (4) the extent to which DOD, Army, and Marine Corps monitor adherence to the policies. GAO analyzed DOD data; reviewed applicable policies; interviewed DOD, Army, Marine Corps, Air Force, and Navy officials; visited two Army and one Marine Corps sites selected on factors such as separation rates; and reviewed a nongeneralizable sample of Army and Marine Corps servicemember misconduct separation documents.