Is the Census Bureau ready for the 2020 Census?

If you don't send in your census form, you can expect a census-taker to interview you in person. However, in this year's tests, up to 25% of those types of cases were closed without a complete interview. This testimony discusses some of the possible reasons why this happened.

We also provide information about other preparations for the 2020 Census, including innovations in validating addresses, and applying lessons learned from the 2010 Census. 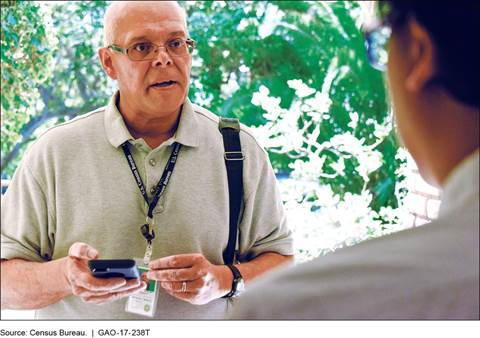 Photo of census-taker talking to someone who didn't return the form during a census test.

GAO preliminarily found that during the 2016 Census Test, nonresponse follow-up (NRFU), where enumerators visit households that did not respond to the census, generally proceeded according to the Census Bureau's (Bureau) operational plans. However, data at both test sites indicate that the Bureau experienced a large number of non-interviews. The Bureau considers non-interviews to be cases where either no data or insufficient data are collected. Bureau officials are not certain why there were so many non-interviews for the test and are researching potential causes. In addition, the Bureau's plan to automate the assignment of NRFU cases to enumerators has the potential to deliver significant efficiency gains as compared to paper-based operations conducted in previous decennial censuses, according to the Bureau. GAO preliminarily found that improvements to certain enumeration procedures and better training could produce additional efficiencies by enabling the Bureau to be more responsive to situations enumerators encounter on the ground. These improvements include providing more flexible access to recently closed, incomplete cases; enumerator interview training with multi-unit property managers; and operational procedures to make use of local data on the best time to attempt interviews.

The Bureau has reengineered its approach to building its master address list for 2020 in part by introducing a two-phase "in-office" process that systematically reviews small geographic areas nationwide. The goal is to limit the more expensive and traditional door-to-door canvassing to those areas most in need of updating, such as areas with recent housing growth. The in-office phases rely on aerial imagery, street imagery, geographic information systems and address file data from state, local, and tribal partners. The Bureau estimates that the new process will result in about 25 percent of housing units requiring field canvassing compared to the traditional process where all housing units were canvassed. The Bureau has identified a series of risks that could affect the cost or quality of the address canvassing operation, including locating hidden housing units such as converted garages, monitoring change in housing stock, and obtaining quality data. The Bureau is testing its reengineered address canvassing operation in two sites through December 2016--in Buncombe County, North Carolina, and St. Louis.

The Bureau's experience in planning for the 2010 decennial can enhance its readiness for 2020. Going forward, GAO's prior work indicates it will be important for the Bureau to address several key lessons learned, including: (1) ensuring key census-taking activities are fully tested, (2) developing and managing on the basis of reliable cost estimates, and (3) sustaining workforce planning efforts to ensure it has the optimal mix of skills to cost-effectively conduct the enumeration.

With a life-cycle cost of about $12.3 billion, the 2010 Census was the most expensive U.S. census in history. To help control costs and maintain accuracy, the 2020 Census design includes new procedures and technology that have not been used extensively in earlier decennials, if at all. While these innovations show promise for a more cost-effective head count, they also introduce risks. As a result, it is important to thoroughly test the operations planned for 2020.This testimony focuses on (1) the preliminary results to date of the Bureau's 2016 Census Test in Los Angeles County, California, and Harris County, Texas; (2) the Bureau's plans for the upcoming test of address canvassing procedures in Buncombe County, North Carolina, and St. Louis, Missouri; and (3) the lessons learned from the 2010 Census that can be applied to preparations for 2020.

This testimony is based on GAO's ongoing reviews of the 2016 Census Test and Address Canvassing Test. For these studies, GAO reviewed Bureau documents and preliminary data, interviewed Bureau officials, and made site visits to observe census operations. This testimony is also based on prior GAO work on lessons learned from the 2010 Census.