How does NRC calculate its fees?

The Nuclear Regulatory Commission collects about 90 percent of its budget by charging fees to its licensees and applicants, such as nuclear power plant operators. However, we found that NRC’s fee calculations were complex and not well explained, which made it difficult for industry stakeholders to understand or comment on them.

We also found that NRC took some steps to improve its explanation of these calculations, but did not establish a way to measure success. We recommended that NRC fully explain its fee calculations and set performance measures for its efforts to increase their transparency. 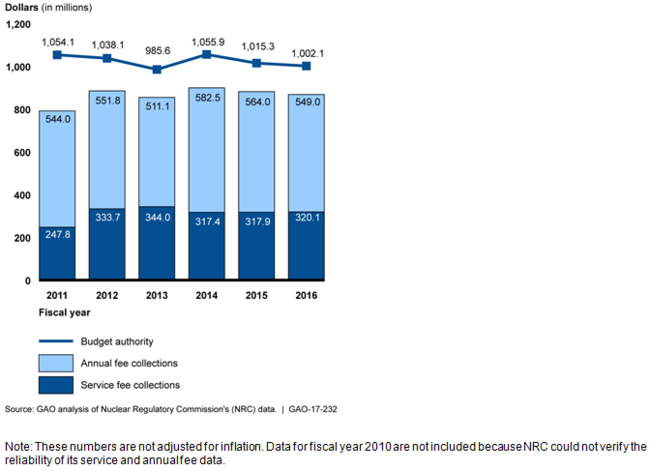 Bar and line chart showing that fees account for most of NRC's annual budget authority.

The Nuclear Regulatory Commission's (NRC) fiscal year 2016 final fee rule and work papers contained information that licensees could use to understand how NRC calculated its fees, but this information did not fully explain the agency's fee calculations. In this and prior fee rules, NRC set two types of fees: service fees and annual fees. NRC established an hourly fee rate for service fees to recover the full cost of specific regulatory services, such as conducting inspections and performing licensing actions. NRC established annual fees to recover regulatory costs that are not otherwise recovered through service fees or are excluded from fee recovery by law. GAO found that NRC's final fee rule did not define key terms, use terms consistently, or provide key calculations, and included errors, all of which obscured NRC's calculations and limited industry stakeholders' ability to understand them. For example, GAO and some industry stakeholders that GAO interviewed could not determine how NRC calculated a key component of its fee-setting process without additional information from NRC staff. NRC's Principles of Good Regulation , which applies to NRC's fee-setting process, states that regulations should be coherent, logical, and practical, and that the regulations should be readily understood and easily applied, among other things. NRC's fee rule and supporting documents did not clearly present the information that stakeholders need in order to understand fee calculations and provide substantive comments to the agency. Until NRC clearly defines and consistently uses key terms, provides complete calculations and explanations for the fees, and ensures the accuracy of its fee rule and work papers, industry stakeholders' understanding of NRC's fee calculations may remain limited.

Industry stakeholders that GAO interviewed identified several challenges with NRC's fee-setting process, some of which NRC has plans to address, but its plans are missing key components. Specifically, industry stakeholders identified challenges that GAO organized into five categories: transparency, fairness, predictability and timeliness, billing, and workload and workforce. For example, one industry stakeholder GAO interviewed said that NRC's fee-setting process is not transparent and that, without more detailed information, the licensee cannot evaluate and comment on NRC's proposed fee rules or replicate NRC's calculations. NRC has initiated a project with the goals of increasing the transparency of its fee calculations and improving the timeliness with which it provides fee information. For example, for fiscal year 2017, NRC staff are planning to add a section to the agency's public website regarding frequently asked questions about user fees, and NRC is planning to publish its proposed and final fee rules earlier in the year than it has in previous years. However, NRC staff could not explain how they will know the extent to which their efforts are achieving their goals because they have not established goals for performance or a way to measure progress toward meeting these goals. Without setting performance goals and measures, NRC cannot effectively assess the extent to which its actions are improving transparency and timeliness.

From 2005 to early 2010, NRC expected an increase in workload due to a projected large number of applications for new nuclear power plants, among other things, and received increased budget authority and hired additional staff. NRC is required by law to collect about 90 percent of its annual appropriation by assessing fees to the commercial nuclear industry it regulates, and as NRC's budget authority increased, so did its regulatory fees. By 2011, however, it had become clear that the projected growth had not materialized. NRC's budget and its regulatory fees, however, have declined little since 2010, and many licensees are confused by the process by which NRC sets its regulatory user fees.

GAO was asked to review NRC's fee-setting process. This report examines, among other things, the extent to which NRC explained its fee calculations in its fiscal year 2016 fee documentation, and challenges industry stakeholders have identified with NRC's fee-setting process. GAO reviewed NRC's fee rules and work papers, interviewed NRC staff and 13 industry stakeholders, and evaluated NRC's actions relative to criteria on issuing regulations and measuring performance.