We found that, although EQIP spent almost $5.7 billion during fiscal years 2009-2015, the program could improve its use of these funds to optimize environmental benefits. We recommended that EQIP use better information and tools to more effectively target EQIP funds and evaluate program applications. 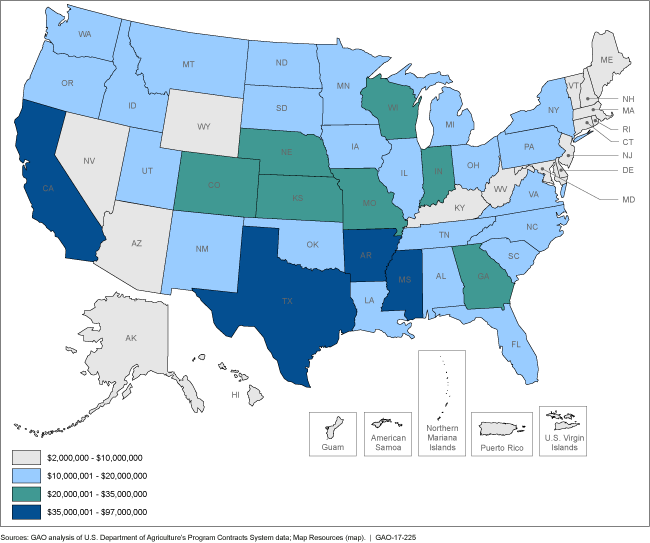 Map of the United States showing how EQIP funds are allocated by state.

For fiscal years 2009 through 2015, the U.S. Department of Agriculture's (USDA) Natural Resources Conservation Service (NRCS) obligated almost $5.7 billion under its Environmental Quality Incentives Program (EQIP) for 219 types of conservation practices to address a variety of environmental concerns in all 50 states. These concerns included water quality and grazing land degradation. By law, NRCS is directed to, among other things, spend at least 60 percent of EQIP funds on livestock-related practices. These practices include installing waste storage facilities to limit damage to water quality and drafting plans to alternate grazing land use between grazing and resting to reduce degradation to the land.

Although EQIP is to optimize environmental benefits, among other things, under the current law, NRCS processes for allocating EQIP funds are not sufficient to optimize such benefits. Based on its review of NRCS's national process and its analysis of agency data, GAO found that the process for allocating EQIP funds to state offices was not based primarily on environmental concerns. NRCS guidance says that allocations to state offices should be based on environmental concerns data, among other things. In practice, national allocations are influenced primarily by historical funding amounts, partly because relevant, practical data on environmental concerns are not always available. Studies by USDA's Conservation Effects Assessment Project (CEAP), a multiagency effort with partners within and outside of USDA, that attempt to quantify the environmental effects of conservation practices have provided data on some environmental concerns but have not generally considered practical constraints, such as budget and statutory requirements. So their results are not always practical for EQIP program managers to use. CEAP leaders said they are beginning to design studies with such constraints in mind. Under federal standards for internal control, management should internally and externally communicate the necessary quality information to achieve the entity's objectives. By having EQIP program managers coordinate with CEAP leaders to ensure that CEAP studies consider practical constraints, the studies could provide NRCS with better information to target EQIP funds to optimize environmental benefits.

Agricultural production can have harmful effects on natural resources, such as when sediment, fertilizer, and animal waste run off into the nation's waterways. Conservation practices, such as installing structures to store animal waste or changing the amount of fertilizer applied to cropland, can help mitigate these effects. NRCS's EQIP provides financial and technical assistance to landowners who voluntarily implement conservation practices on agricultural land or certain forestlands. The Food Security Act of 1985, as amended, states that one purpose of EQIP is to optimize environmental benefits.

GAO was asked to review whether EQIP funds are targeted where they will deliver the greatest environmental benefit. This report examines the distribution of EQIP obligations for fiscal years 2009 through 2015 and the extent to which EQIP processes for allocating funding and selecting applications are sufficient to optimize environmental benefits. GAO reviewed NRCS documents, analyzed data for fiscal years 2009 through 2015 (the most recent data available), and interviewed NRCS officials.

GAO is making four recommendations, including that NRCS direct EQIP program managers to coordinate with CEAP leaders to develop and use better information for targeting EQIP funds and modify guidance and ranking tools for evaluating EQIP applications. NRCS neither agreed nor disagreed with these recommendations but described steps it is planning or taking to address them.