Medicaid made an estimated $36 billion in payment errors in 2016—underscoring the need for improved oversight.

Federal Medicaid administrators rely on state-reported data to inform oversight activities, but we found continuing concerns regarding such data's completeness, accuracy, and timeliness.

Although Medicaid administrators cite a key initiative to gather new, better data and improve program oversight, they haven’t developed plans to ensure the quality of these new data, or how to use them for better oversight.

We recommended expedited efforts to assess and ensure the quality of the new Medicaid data. 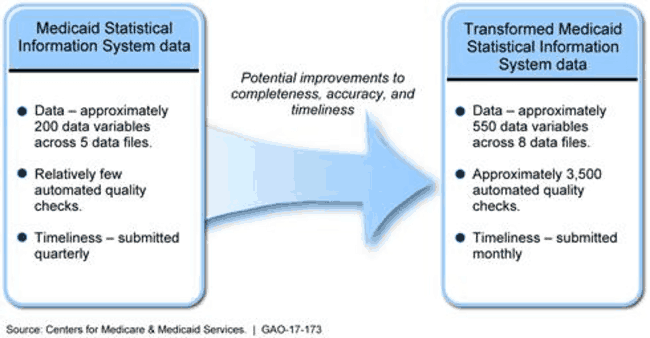 Graphic showing how Medicaid data may improve under new system.

GAO found that available Medicaid expenditure and utilization data do not provide CMS with sufficient information to consistently ensure that payments are proper or that beneficiaries have access to covered services. The Centers for Medicare & Medicaid Services (CMS), the agency within the Department of Health and Human Services (HHS) that administers the Medicaid program, relies on two key data sources for program oversight: the CMS-64, which serves as the basis for calculating the amount of federal matching funds for states, and the Medicaid Statistical Information System (MSIS), which is designed to report individual beneficiary claims data. The CMS-64 and MSIS have the potential to offer a robust view of payments, overall spending, and services in the Medicaid program; however, GAO found that the usefulness of these data is limited because of issues with completeness, accuracy, and timeliness.

Available expenditure data do not provide complete or accurate information on how states finance their portion of program costs, such as complete data on the sources or amounts of local government funds used to finance states' share of Medicaid costs, thus complicating CMS's ability to assess the appropriateness of states' financing.

Available utilization data, particularly for Medicaid managed care, are incomplete and are reported up to 3 years late, complicating CMS's ability to identify billing patterns that indicate inappropriate provider behavior or ensure that beneficiaries have access to covered services.

CMS has acknowledged the need for improved Medicaid data and cites the Transformed Medicaid Statistical Information System (T-MSIS) as its key initiative to improve Medicaid data and program oversight. T-MSIS includes aspects aimed at improving the completeness, accuracy, and timeliness of state data available to CMS, yet uncertainty remains as to when these data will be available from all states as implementation has been delayed for several years. As of October 2016, 18 states were submitting T-MSIS data. Although CMS officials were uncertain when the remaining states would begin submitting data, they estimated that states representing over 70 percent of the Medicaid population would be submitting T-MSIS data by the end of calendar year 2016. CMS officials identified several factors contributing to states' delayed T-MSIS implementation, such as coinciding with the ongoing efforts of over 30 states to redesign or replace their Medicaid information technology systems. Moreover, CMS has not fully developed its plans to ensure the quality of T-MSIS data, and its plans for using these data for oversight purposes remain preliminary. Through rulemaking and other guidance, CMS has taken other actions to improve data; however, given that these actions have recently or not yet been implemented, it is unclear how they will affect CMS's oversight. CMS's continued reliance on inaccurate, incomplete, and untimely data, and the ongoing uncertainty about the scope and timing of its remedial actions, hamper effective oversight and are inconsistent with federal internal control standards, which require entities to rely on quality and timely information to oversee their programs and take timely actions to improve deficiencies.

To inform its oversight of Medicaid, CMS relies on state-reported data that contain information on multiple aspects of the program, including expenditures and service utilization. Recent increases in Medicaid improper payments, which were an estimated $36 billion in fiscal year 2016, have exacerbated concerns about the quality of data available to CMS for program oversight.

GAO was asked to examine the usefulness of Medicaid data for oversight purposes and any efforts to improve known limitations. This report (1) describes how available Medicaid expenditure and utilization data affect CMS's ability to oversee the Medicaid program; and (2) examines CMS's efforts to improve these data. To address these objectives, GAO reviewed agency guidance, laws, regulations, and federal internal control standards; reviewed reports from GAO and others published from March 2010 through September 2016; and interviewed CMS officials about continuing data challenges and initiatives to improve data.

GAO recommends that CMS take immediate steps to improve Medicaid data available for program oversight, such as expediting efforts to assess and ensure the quality of T-MSIS data. HHS concurred with GAO's recommendation.