The nation's electricity grid faces potential threats from natural disasters and deliberate attacks. We looked at the federal government's efforts to enhance the grid’s resilience—its ability to adapt to changing conditions and withstand and recover from potentially disruptive events (such as the loss of power lines).

The 27 federal efforts to enhance grid resilience focused on enhancing awareness of potential disruptions, coordinating responses, and sharing information between government and private industry (which owns most of the electricity grid). We found these efforts helped enhance and sustain coordination between federal agencies. 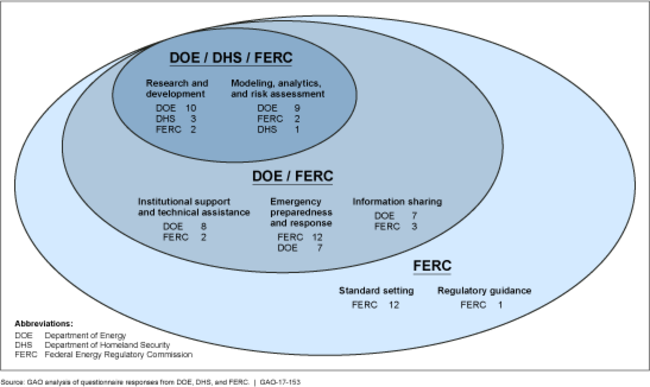 The Department of Energy (DOE), the Department of Homeland Security (DHS), and the Federal Energy Regulatory Commission (FERC) reported implementing 27 grid resiliency efforts since 2013 and identified a variety of results from these efforts. The efforts addressed a range of threats and hazards—including cyberattacks, physical attacks, and natural disasters—and supported different types of activities (see table). These efforts also addressed each of the three federal priorities for enhancing the security and resilience of the electricity grid: (1) developing and deploying tools and technologies to enhance awareness of potential disruptions, (2) planning and exercising coordinated responses to disruptive events, and (3) ensuring actionable intelligence on threats is communicated between government and industry in a time-sensitive manner. Agency officials reported a variety of results from these efforts, including the development of new technologies—such as a rapidly-deployable large, high-power transformer—and improved coordination and information sharing between the federal government and industry related to potential cyberattacks.

Note: Because agency efforts often supported more than one type of activity, the number of efforts across the types of activities exceeds 27, the number of federal efforts GAO identified in this review.

Federal grid resiliency efforts were fragmented across DOE, DHS, and FERC and overlapped to some degree but were not duplicative. GAO found that the 27 efforts were fragmented in that they were implemented by three agencies and addressed the same broad area of national need: enhancing the resilience of the electricity grid. However, DOE, DHS, and FERC generally tailored their efforts to contribute to their specific missions. For example, DOE's 11 efforts related to its strategic goal to support a more secure and resilient U.S. energy infrastructure. GAO also found that the federal efforts overlapped to some degree but were not duplicative because none had the same goals or engaged in the same activities. For example, three DOE and DHS efforts addressed resiliency issues related to large, high-power transformers, but the goals were distinct—one effort focused on developing a rapidly deployable transformer to use in the event of multiple large, high-power transformer failures; another focused on developing next-generation transformer components with more resilient features; and a third focused on developing a plan for a national transformer reserve. Moreover, officials from all three agencies reported taking actions to coordinate federal grid resiliency efforts, such as serving on formal coordinating bodies that bring together federal, state, and industry stakeholders to discuss resiliency issues on a regular basis, and contributing to the development of federal plans that address grid resiliency gaps and priorities. GAO found that these actions were consistent with key practices for enhancing and sustaining federal agency coordination.

In light of increasing threats to the nation's electricity grid, national policies have stressed the importance of enhancing the grid's resilience—its ability to adapt to changing conditions; withstand potentially disruptive events, such as the loss of power lines; and, if disrupted, to rapidly recover. Most of the electricity grid is owned and operated by private industry, but the federal government has a significant role in promoting the grid's resilience. DOE is the lead agency for federal grid resiliency efforts and is responsible for coordinating with DHS and other relevant federal agencies on these efforts.

GAO was asked to review federal efforts to enhance the resilience of the electricity grid. This report (1) identifies grid resiliency efforts implemented by federal agencies since 2013 and the results of these efforts and (2) examines the extent to which these efforts were fragmented, overlapping, or duplicative, and the extent to which agencies had coordinated the efforts.

GAO reviewed relevant laws and guidance; identified a list of federal grid resiliency efforts; sent a questionnaire to officials at DOE, DHS, and FERC to collect information on each effort and its results; analyzed questionnaire responses and agency documents to assess whether federal efforts were fragmented, overlapping, or duplicative and how agencies coordinated those efforts; and interviewed agency officials and industry group representatives.