The Corps is responsible for planning and constructing the Olmsted Locks and Dam project on the Ohio River, 17 miles upstream from the Mississippi River. The project was authorized in 1988 at a cost of $775 million and estimated to take 7 years. In 2012, the Corps sought an increase in its authorized cost to $2.918 billion, with an estimated completion date of 2024. Reports by the Corps and others identified factors such as the selection of an innovative construction method, the use of a cost-reimbursement contract, and limited funding as contributing to cost increases and schedule delays.

Artist Rendering of the Olmsted Locks and Dam Project 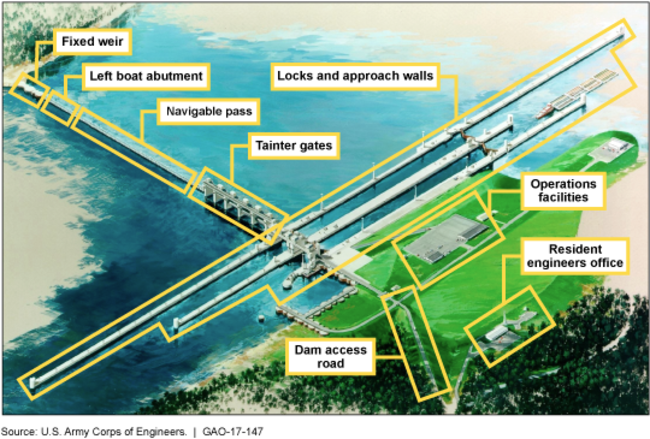 Depiction of the Olmsted Locks and Dam project, with components labeled

Reports by the U.S. Army Corps of Engineers (Corps) and consultants it hired identified the construction method, contract type, and other factors as primary contributors to cost increases and schedule delays in the Olmsted Locks and Dam project. Specifically, the 2012 Corps' post-authorization change report (PACR) and a 2012 consultant report identified the Corps' 1997 selection of an innovative in-the-wet method to construct the dam as a contributing factor. With this method, concrete sections of the dam, or shells, are built on shore, carried out into the river, and set in place in the riverbed. The Corps decided to use this method based on projections that it would cost less and allow the project to be completed sooner than the traditional in-the-dry method using temporary, watertight structures, or cofferdams, to drain the riverbed to allow work. However, the Corps' initial cost estimate was low and did not adequately consider such things as river conditions that slowed construction. A 2012 Corps study compared the in-the-wet and in-the-dry methods and found that continuing to use the in-the-wet method would cost more but would allow the project to be completed sooner. Based on this study, the Corps continued to use the in-the-wet method. In addition, the PACR and a 2008 consultant report found that the Corps' decision to use a cost-reimbursement contract for the dam construction after receiving no offers for a firm fixed -price contract contributed to increased administrative and overhead costs. The reports noted that managing a cost-reimbursement contract was more cost- and time-intensive than managing a firm fixed-price contract, which the Corps typically uses. The Corps and consultant reports also identified other contributing factors, including limited funding; market condition changes, such as unexpected and significant increases in the price of construction materials; and design changes during the dam construction in response to soil conditions and other issues.

The benefits foregone because of delays at Olmsted are uncertain, primarily because the Corps' estimates for the project are no longer relevant or are of limited use for estimating the benefits that might have been generated had the project opened as planned in 2006. The Corps estimated the benefits associated with the project several times, including in a 1990 study. Corps officials said, however, that the benefit estimates from this study are no longer relevant for estimating benefits foregone because of past project delays. In particular, the 1990 study did not anticipate the regulatory and market factors that reduced the demand for coal shipments on the Ohio River, beginning in the 1990s. In the 2012 PACR, the Corps updated its benefit estimates based on a revised opening date of 2020, but they are of limited use for estimating benefits foregone for several reasons. For example, the analysis was based on assumptions about barge forecasts that may not represent the actual traffic that transited the locks and dams during past delays. According to Corps economists, the additional interest incurred during construction because of project delays is another type of benefit foregone because it represents the hypothetical return or “benefit” that could have been earned by investing the money in some other use. GAO found that the difference in interest estimated in 1990 and in the PACR to be about $400 million, which represents an estimate of the additional interest associated with such factors as changes in the project design that led to the construction delays and increased construction costs.

The Corps is responsible for planning and constructing the Olmsted Locks and Dam project on the Ohio River, 17 miles upstream from the Mississippi River. The project will replace two locks and dams, which are beyond their design lives, with new locks and a new dam. According to the Corps, more tonnage passes through Olmsted annually than any other place in the nation's inland navigation system. The Water Resources Development Act of 1988 authorized the Olmsted project at a cost of $775 million. The Corps estimated construction would take 7 years. In 2012, the Corps submitted a PACR to Congress, seeking to increase the Olmsted project's authorized cost to $2.918 billion, with an estimated completion date of 2024.

The Water Resources Reform and Development Act of 2014 included a provision for GAO to report on why the Olmsted project exceeded its budget and was not completed as scheduled, among other things. This report examines (1) the factors that the Corps and others have identified as contributing to cost increases and schedule delays and (2) what is known about the costs of benefits foregone because of project delays. GAO compared the factors cited in the PACR and three relevant Corps and consultant reports, examined the Corps' economic analyses and developed an estimate of construction interest incurred because of project delays, and interviewed Corps officials and industry representatives.

GAO is not making recommendations in this report. The Department of Defense had no comments to add to the report.