Medicaid provides long-term care to states' most vulnerable populations, such as the elderly or disabled. On average, community-based care costs less than at a nursing facility or other institution—and many people prefer it.

On the federal side, we recommended better oversight of the data used to set payment rates, as well as the rates' effect on care and other outcomes. 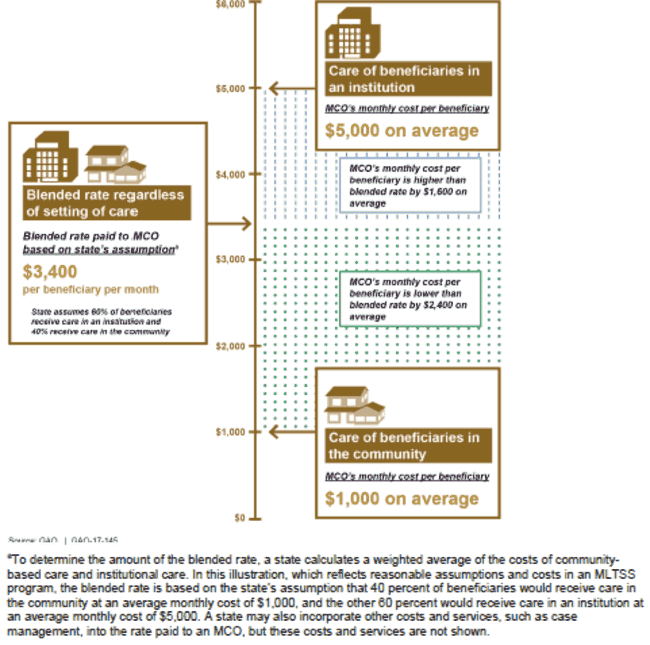 Out of six states with Medicaid managed long-term services and supports (MLTSS) programs that GAO selected for review, five set clear financial incentives in their payment rates for managed care organizations (MCO) to provide care in the community versus in an institution. However, most of the selected states did not opt to link payments or penalties to MCO performance on MLTSS goals. These goals, which include enhancing the provision of community-based care, are developed by states and the Centers for Medicare & Medicaid Services (CMS), the agency in the Department of Health and Human Services (HHS) responsible for overseeing Medicaid.

GAO found that CMS's oversight of state payment structures was limited. CMS expects states' MLTSS programs to enhance the provision of community-based care. However, GAO found CMS does not consistently require states to report on whether the payment structures—including payment rates, incentive payments, and penalties—are achieving MLTSS goals. For example, CMS required three of the selected states to report on the provision of community-based care, but did not require any such reporting from the other three states. According to federal internal control standards, federal agencies should use quality information to achieve agency objectives. Without requiring information on states' progress toward MLTSS goals, CMS will continue to pay billions of dollars to states without knowing if states have sufficient incentives for community-based care.

In addition, GAO identified risks with CMS's oversight of the data used to set MLTSS rates, specifically the appropriateness and reliability of those data. Under federal regulations, MLTSS rates must be appropriate and adequate. To the extent that states use data that are not appropriate and reliable to set rates, the resulting rates could be too low, which could provide an incentive for MCOs to reduce care, or too high, which results in more federal spending than necessary.

The provision of long-term services and supports in Medicaid is a significant challenge, because of the vulnerability and service needs of beneficiaries, as well as the high cost of care. An increasing number of states have MLTSS programs, which can be used to expand community-based care and lower costs. However, whether these programs are an effective strategy depends, in part, on the design of the payment structures.

GAO reviewed relevant federal regulations, guidance, and internal control standards. For six states selected for variation in location and experience (AZ, DE, FL, KS, MN, and TX), GAO reviewed the contracts and rate certifications most recently approved by CMS, the terms and conditions set by CMS for the programs, and other payment documentation. GAO also interviewed CMS officials and Medicaid officials from the selected states.