About 17 percent of adults in the U.S. have chronic kidney disease. If this disease progresses to kidney failure, patients need dialysis or a kidney transplant to stay alive.

In 2013, Medicare spent nearly $31 billion to treat patients whose kidneys had failed. Given the high costs of this disease, we looked at how the federal government funds and prioritizes its research. We found that the National Institutes of Health spent $564 million on kidney disease research in 2015, an increase of 2.7 percent from 2014. These funds supported a broad range of projects, including research on kidney donation.

Treating kidney failure can involve dialysis treatment for 3 to 4 hours, three times per week, at a facility outside the home. 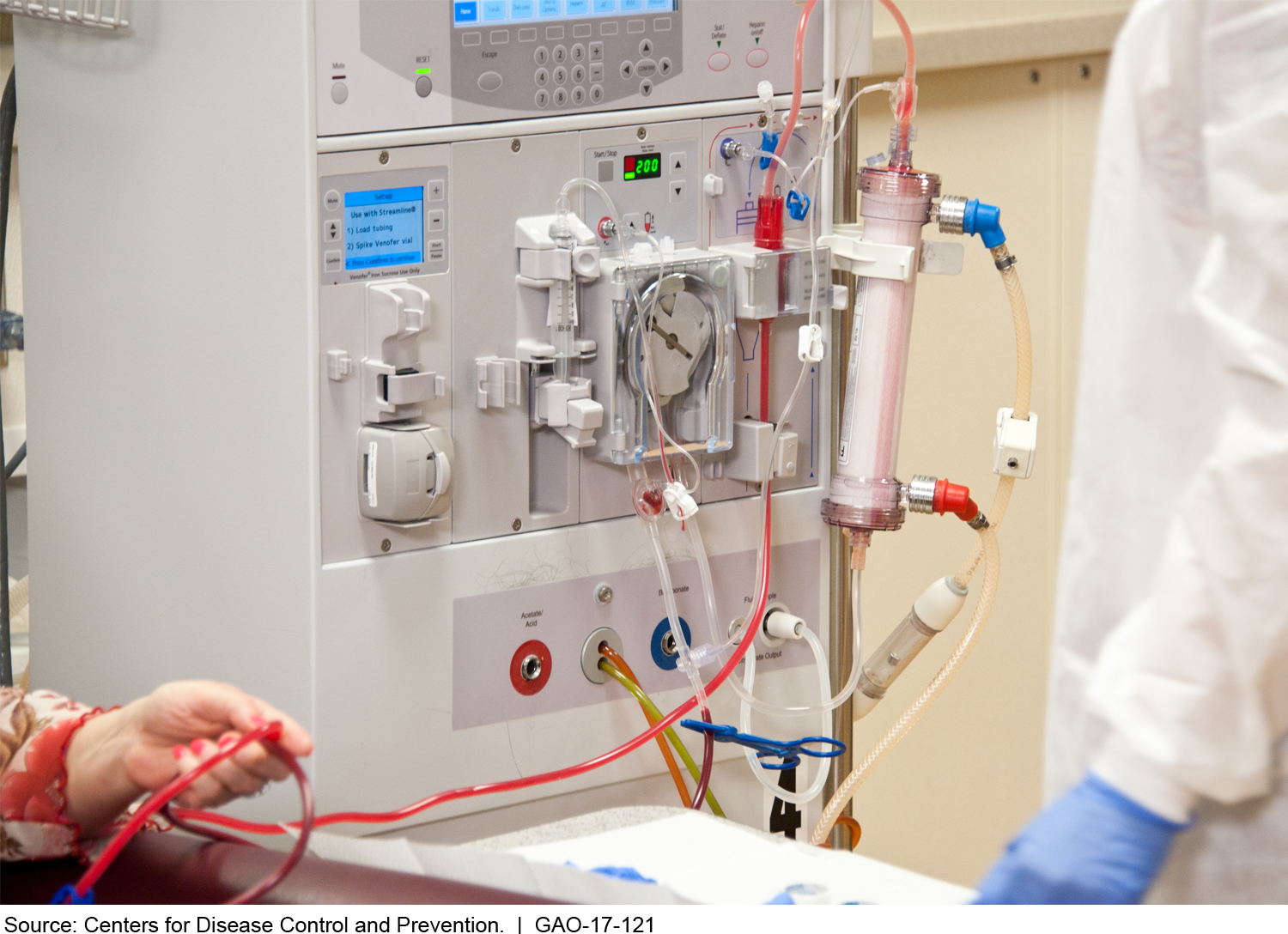 The National Institutes of Health (NIH), within the Department of Health and Human Services, is the primary federal agency that conducts biomedical research on kidney disease, as well as various other diseases and conditions. NIH's budget—$30 billion in fiscal year 2015—mostly funds extramural research that supports research personnel working at universities, medical schools, and other institutions. The National Institute of Diabetes and Digestive and Kidney Diseases (NIDDK)—one of NIH's 27 institutes and centers (IC)—has primary responsibility for kidney disease research. NIH funding for biomedical research on kidney disease in fiscal year 2015 was approximately $564 million—an increase of 2.7 percent from fiscal year 2014. NIDDK provided the majority (60 percent) of this funding, supporting a broad range of projects, such as chronic kidney disease, end-stage renal disease (ESRD) treatment, and kidney donation. GAO also reviewed NIH research funding levels for other diseases and conditions in the United States—those that are associated with high mortality or are among the most prevalent chronic conditions. GAO found that funding for fiscal year 2015 varied widely among these diseases and conditions—for example, from $28 million for emphysema to nearly $5.4 billion for cancer. This variation in funding reflects a range of factors, including each IC's mission, budget, and research priorities.

Representatives from six private kidney care groups GAO interviewed generally agreed with NIDDK's kidney disease research priorities; however, some of the groups' members identified kidney disease topic areas they believe warrant more attention from NIDDK, such as a lack of kidney disease awareness in the general public. NIDDK agreed with this and other topics raised by the groups, and pointed out a variety of ongoing NIDDK programs that address these topics.

The Department of Health and Human Services provided technical comments, which GAO incorporated as appropriate.

An estimated 17 percent of U.S. adults have chronic kidney disease—the most common form of kidney disease—a condition in which the kidneys are damaged and cannot filter blood sufficiently, causing waste from the blood to remain in the body. Kidney disease patients may progress to ESRD, a condition of kidney failure, which can cause death without dialysis or kidney transplant. In 2013, the Medicare program—which pays for ESRD treatment—spent $30.9 billion to treat approximately 530,000 patients. Given the high cost of kidney disease in terms of health consequences and federal spending, GAO was asked to examine how the federal government funds and prioritizes kidney disease research. This report describes (1) the level of NIH funding for biomedical research on kidney disease, and for other leading diseases and conditions; and (2) how NIDDK sets priorities for kidney disease research.

To describe NIH funding for research on kidney disease and other diseases and conditions, GAO selected leading diseases and conditions (based on mortality and prevalence) and analyzed their levels of research funding based on NIH data for fiscal year 2015. To describe how NIDDK sets priorities for kidney disease research, GAO reviewed documents—including those on research portfolios and strategic planning—from NIDDK, NIH, and other relevant federal agencies. Also, GAO interviewed agency officials and private kidney care groups representing a broad range of perspectives.