The Renewable Fuel Standard program calls for greater use of advanced biofuels—fuel made from waste fats and oils or crop residues, for example—in the transportation fuel supply through 2022.

Yet, there is not nearly enough of this fuel to meet the program's targets—nor will there likely be enough in the near future. Experts we interviewed cited the high costs of creating advanced biofuel, the relatively low price of fossil fuel, the timing and cost to bring new tech to commercial-scale production, regulatory uncertainty, and other issues as challenges to increased production. 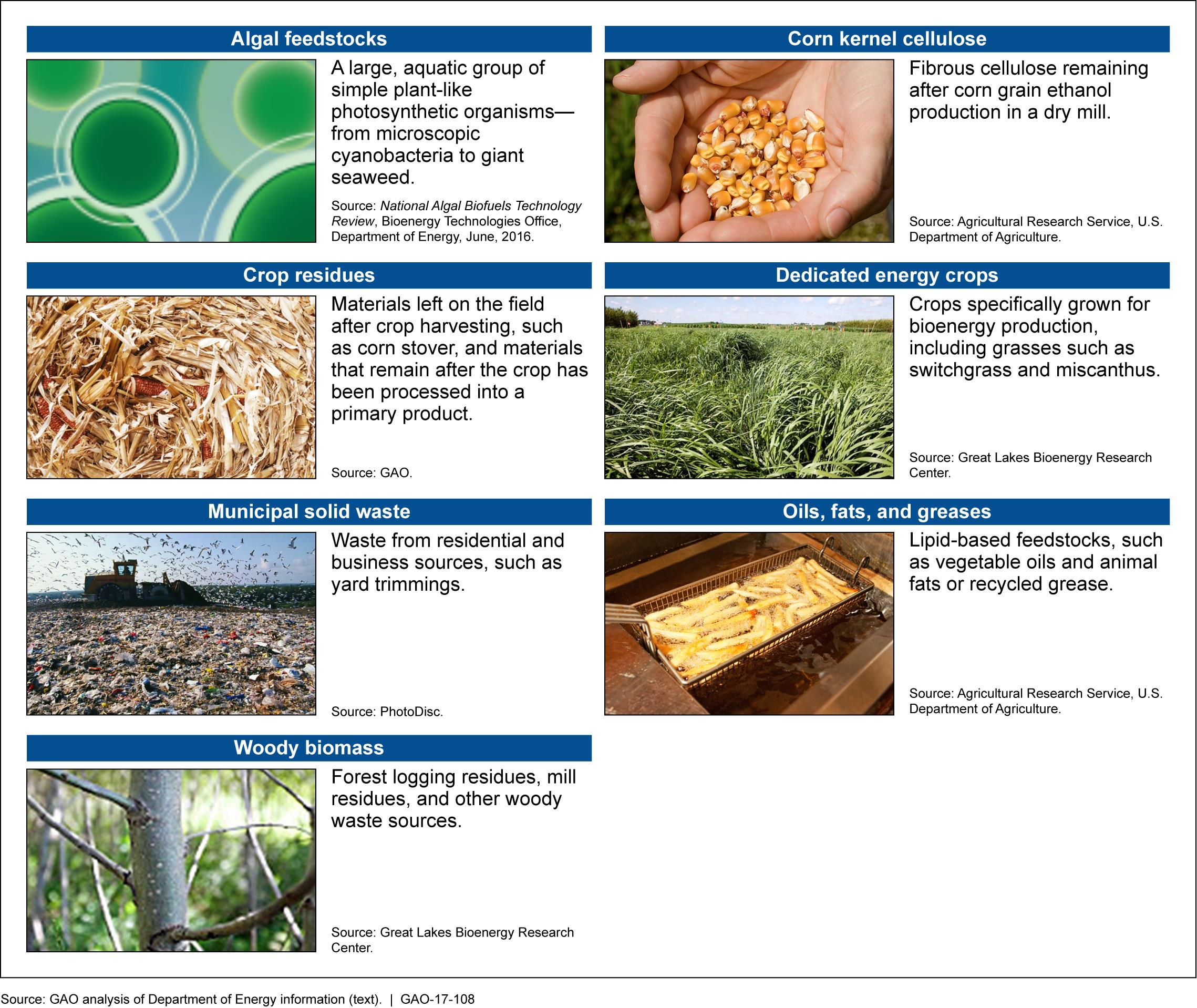 The federal government has supported research and development (R&D) related to advanced biofuels through direct research or grants, and the focus is shifting away from cellulosic ethanol and toward drop-in biofuels. Unlike corn starch-based or cellulosic ethanol, drop-in fuels such as renewable gasoline are fully compatible with existing infrastructure, such as vehicle engines and distribution pipelines. In fiscal years 2013 through 2015, the federal government obligated more than $1.1 billion for advanced biofuels R&D. Of this amount, the Department of Energy (DOE) obligated over $890 million. For example, DOE's Office of Science funds three bioenergy research centers affiliated with universities and national labs that conduct basic research for all stages of biofuel production. The Department of Agriculture (USDA) obligated over $168 million in fiscal years 2013 through 2015 to support advanced biofuels. For example, USDA scientists developed a novel process to increase production of butanol, a drop-in fuel that lowered production costs by over 20 percent. The remaining federal obligations during these years were through the Environmental Protection Agency (EPA), the Department of Defense (DOD), and the National Science Foundation (NSF), which obligated relatively less for such R&D. According to agency officials, agencies are shifting their focus to drop-in fuels in part because they are compatible with existing infrastructure. Officials from one federal funding agency said this compatibility makes drop-in fuels more desirable than cellulosic ethanol.

Experts said that several advanced biofuels are technologically well understood and some are being commercially produced, but they noted there is limited potential for increased production in the near term and cited several factors that will make significant increases challenging. Given that current advanced biofuel production is far below Renewable Fuel Standard (RFS) targets and those targets are increasing every year, it does not appear possible to meet statutory target volumes for advanced biofuels in the RFS under current market and regulatory conditions. Biofuels that are technologically well understood include biodiesel, renewable diesel, renewable natural gas, cellulosic ethanol, and some drop-in fuels. A few of these fuels, such as biodiesel and renewable diesel, are being produced in significant volumes, but it is unlikely that production of these fuels can expand much in the next few years because of feedstock limitations. Current production of cellulosic biofuels is far below the statutory volumes and, according to experts, there is limited potential for expanded production to meet future higher targets, in part because production costs are currently too high. Experts told GAO that technologies for producing other fuels, such as some drop-in fuels, are technologically well understood but that these fuels are not being produced because production is too costly. Among the factors that will affect the speed and volume of production, experts cited the low price of fossil fuels relative to advanced biofuels. This disparity in costs is a disincentive for consumers to adopt greater use of biofuels and also a deterrent for private investors entering the advanced biofuels market. Experts also cited uncertainty about government policy, including whether the RFS and federal tax credits that support advanced biofuels will remain in effect. While such policies should encourage investment, investors do not see them as reliable and thus discount their potential benefits when considering whether to invest.

The RFS generally mandates that domestic transportation fuels be blended with increasing volumes of biofuels through 2022, with the goals of reducing greenhouse gas emissions and expanding the nation's renewable fuels sector while reducing reliance on imported oil. Blending of conventional renewable fuels, primarily ethanol derived from corn starch which is required to reduce greenhouse gas emissions by 20 percent compared with petroleum-based fuels, has nearly reached the maximum called for under the RFS. Further growth in renewable fuels is to come from advanced biofuels, which must reduce life-cycle greenhouse gas emissions by at least 50 percent compared with petroleum-based fuels to qualify under the RFS. However, production of advanced biofuels has not kept pace with statutory targets. To promote the development and commercialization of advanced biofuels, the federal government has supported R&D efforts for biofuels since the 1970s.

GAO was asked to review issues related to advanced biofuels R&D. This report describes (1) how the federal government has supported advanced biofuels R&D in recent years and where its efforts have been targeted and (2) expert views on the extent to which advanced biofuels are technologically understood and the factors that will affect the speed and volume of production. GAO interviewed DOD, DOE, EPA, NSF, and USDA officials and worked with the National Academy of Sciences to convene a meeting of experts from industry, academia, and research organizations.

EPA generally agreed with the report.