EPA estimates water and sewer utilities will need to spend $655 billion over the next 20 years to maintain, upgrade, or replace water infrastructure. Many midsize and large cities that lost a large percentage of their population are struggling to replace their pipes and treatment plants. Without improvements, these cities may be at serious risk of more frequent accidental sewage discharges and lead contamination among other things. Concerned that utility rates are increasingly unaffordable for low-income customers, some utilities are reducing water treatment capacity or decommissioning lines in vacant areas to fit current demands. 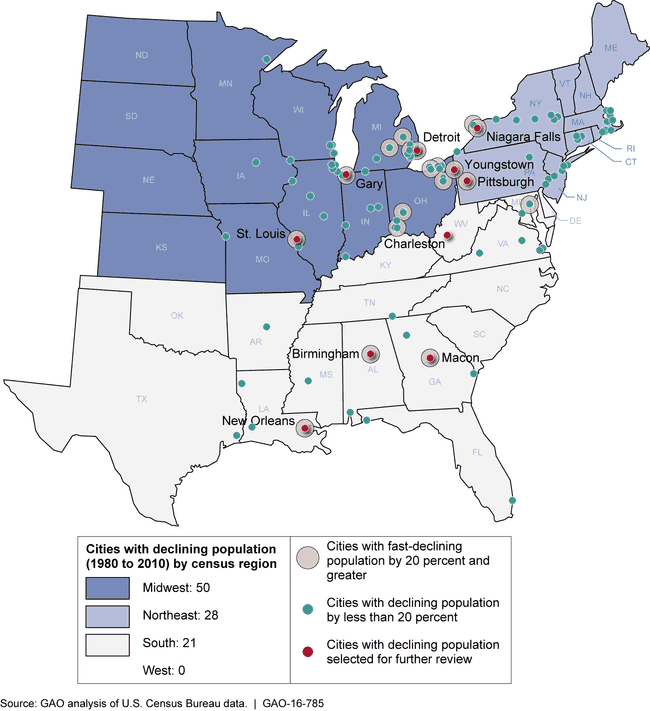 This map shows cities with declining population by census region for 1980 to 2010.

Midsize cities (with populations from 50,000 to 99,999) and large cities (with populations of 100,000 and greater) that have experienced a population decline are generally more economically distressed than growing cities. Specifically, GAO's review of American Community Survey data for 674 midsize and large cities showed that the 99 cities with declining population had higher poverty and unemployment rates and lower median income than cities with growing populations. Little research has been done about these cities' overall water and wastewater infrastructure needs, but the needs of the 10 midsize and large cities that GAO reviewed generally reflected the needs of cities nationally, as identified in needs assessments conducted by the Environmental Protection Agency (EPA). Water and wastewater utility representatives whom GAO interviewed described major infrastructure needs, including pipeline repair and replacement and wastewater improvements to control combined sewer overflows (i.e., wastewater discharges to streams and other water bodies during storms).

Utilities for the 10 cities GAO reviewed used the strategy of raising rates to increase revenues to address water and wastewater infrastructure needs and used other strategies to address concerns about rate affordability for low-income customers. Most of the 14 utilities GAO reviewed raised rates annually to cover declines in revenues related, in part, to decreasing water use from declining populations, or to pay for rising operating and capital expenses. To help address rate affordability concerns, all of the utilities reviewed had developed customer assistance programs, a strategy to make rates more affordable, for example, by developing a payment plan agreeable to the customer and the utility. In addition, most utilities were using or had plans to use one or more cost-control strategies to address needs, such as rightsizing system infrastructure to fit current demands (i.e., reducing treatment capacity or decommissioning water or sewer lines in vacant areas). For example, as part of rightsizing, representatives GAO interviewed for 5 wastewater utilities said that they planned or were considering using vacant areas for green infrastructure (vegetated areas that enhance on-site infiltration) to help control stormwater that can lead to sewer overflows.

As of June 2016, six federal programs and one policy could assist midsize and large cities with declining populations in addressing their water and wastewater infrastructure needs. Cities with declining populations may receive funding from the six programs, managed by EPA, the Economic Development Administration, the Department of Housing and Urban Development (HUD), and the Federal Emergency Management Agency, for such projects. For example, states can use a portion of EPA's Clean Water and Drinking Water State Revolving Funds to provide additional subsidies in the form of principal forgiveness or negative interest loans to cities that meet state affordability criteria, such as median household income. The Birmingham Water Works Board, one of the 14 utilities GAO reviewed, received $11.6 million from the Drinking Water State Revolving Fund in fiscal years 2010 through 2015, including $1.7 million with principal forgiveness to pay for green projects, such as water efficiency projects.

GAO provided a draft of this report to EPA, the Economic Development Administration, and HUD for comment. The agencies provided technical comments that were incorporated, as appropriate.

Many midsize and large cities throughout the United States, including the Midwest and Northeast, have lost a substantial percentage of their population. These cities face the challenge of a corresponding decline in utility revenues from a loss of ratepayers, which makes it difficult to address their water infrastructure needs. Overall, water and wastewater utilities across the United States face substantial costs to maintain, upgrade, or replace aging and deteriorating infrastructure—approximately $655 billion for water and wastewater utilities over the next 20 years according to EPA's most recent estimates.