When available supplies of prescription drugs are insufficient, patient care may be adversely affected. The number of new shortages has generally decreased since 2011, while the number of ongoing shortages remained high.

Number of Drug Shortages from January 2010 through December 2015 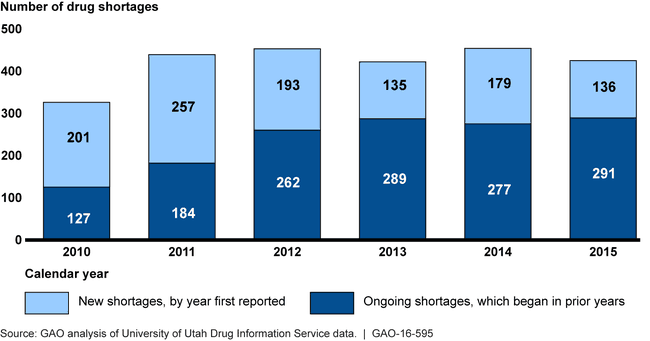 To help address shortages, the Food and Drug Administration (FDA) prioritized the review of—more quickly reviewed—383 drug applications and supplements during the time period GAO examined. Most were for generic sterile injectable drugs. FDA's approval of some of these submissions occurred before the shortage was resolved. Although the timing of FDA's approval does not establish a causal link, it could indicate that FDA's action helped address some shortages.

GAO found that, as part of FDA's oversight of drug safety and quality, it generally issued an increasing number of warning letters to sterile injectable drug establishments during the time period GAO reviewed for noncompliance with manufacturing standards outlined in federal regulations. However, the percentage of inspections resulting in warning letters remained relatively small as the number of inspections also increased. Moreover, seven establishments that were linked to widespread shortages and received warning letters all had previous indications of difficulty complying with manufacturing standards.

Shortages of sterile injectable anti-infective and cardiovascular drugs in 2012, 2013, and 2014 were strongly associated with certain factors GAO examined. Two factors—a decline in the number of suppliers and failure of at least one establishment making a drug to comply with manufacturing standards resulting in a warning letter—suggest that shortages may be triggered by supply disruptions. A third factor—drugs with sales of a generic version—suggests that due to relatively low profit margins for generic drugs, manufacturers are less likely to increase production, making the market vulnerable to shortages. The Department of Health and Human Services (HHS) reviewed a draft of this report and reiterated its commitment to addressing drug shortages. GAO incorporated HHS's technical comments as appropriate.

Drug shortages are a serious public health concern. GAO previously found that many shortages were of sterile injectable drugs and could generally be traced to supply disruptions caused by manufacturers slowing or halting production to address quality issues.

Congress included a provision in statute for GAO to review several aspects of drug shortages. This report examines (1) trends in drug shortages, (2) FDA's efforts to prioritize reviews of drug submissions to address shortages, (3) trends in FDA warning letters issued to sterile injectable manufacturing establishments for noncompliance with manufacturing standards, and (4) the relationship between certain factors and shortages of sterile injectable drugs. GAO analyzed—using various methods including regression analyses—drug shortage data from the University of Utah Drug Information Service from 2010 through 2015; drug sales data from IMS Health from 2010 through 2014 for sterile injectable anti-infective and cardiovascular drugs (which have been subject to multiple and prolonged shortages); and FDA data, including data on warning letters related to inspections conducted from October 2006 through September 2013 and data on prioritized reviews from January 2010 through July 2014, which were generally the latest available data at the time GAO began its analysis. GAO also interviewed FDA officials and reviewed agency documents, including documents related to the issuance of warning letters to seven establishments FDA and others said were linked to widespread shortages.