Medicare is changing how it determines how much to pay for certain durable medical equipment items, such as oxygen, wheelchairs, and walkers. These ongoing changes helps Medicare (and its beneficiaries) pay less for these items—saving Medicare about $3.6 billion between mid-2013 and 2015, according to its estimates. It also limits the number of suppliers that are eligible to furnish these items to Medicare beneficiaries. Our report takes a look at the effects of the change on beneficiaries' access to and use of the relevant items.

Percentage Change from 2012 to 2014 in Number of Beneficiaries Receiving Durable Medical Equipment Items, by Whether Item or Area Was Included in Competitive Bidding Program (CBP) Round 2 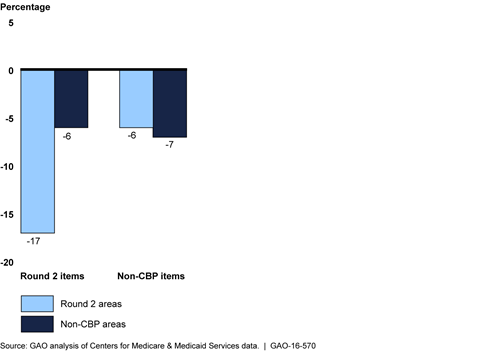 CMS reports that available evidence from the agency's monitoring efforts indicates that the implementation of round 2 and the national mail-order program have had no widespread effects on beneficiary access. In particular, CMS has reported that its health status monitoring tool has not detected any changes in health measures attributable to the CBP, and the results of its 2014 post-CBP beneficiary satisfaction surveys remained positive. In addition, the number of CBP inquiries and complaints generally decreased throughout the first 2 years of round 2 and the national mail-order program. CMS officials told GAO that CMS took measures to ensure that contract suppliers met their contract obligations, such as investigating complaints using secret shopping calls, and terminating contracts of suppliers that remained noncompliant after receiving targeted education. However, some beneficiary advocacy groups and state hospital associations reported specific access issues, such as difficulty locating contract suppliers that will furnish certain items and delays in delivery of DME items.

To achieve Medicare savings for DME, the Medicare Prescription Drug, Improvement, and Modernization Act of 2003 required that CMS implement the CBP for certain DME, such as wheelchairs and oxygen, in phases, or rounds. Round 1 started in 2008, and round 2 and the national mail-order program started in 2013. CMS estimated that the first 2 years of round 2 and the national mail-order program saved Medicare approximately $3.6 billion. GAO has reported on several prior CBP rounds.

GAO was asked to continue to review the implementation of the CBP. In this report, GAO examines the extent to which round 2 and the national mail-order program have affected (1) utilization of CBP-covered DME items, and (2) beneficiaries' access to DME items. This report also (3) describes the number and market shares of the round 2 and mail-order program suppliers.

To examine the effect of CBP on utilization, GAO used Medicare DME claims data from 2012 and 2014—the year before and the year after implementation of round 2—to compare the number of beneficiaries who received CBP-covered DME items. To examine the effect of CBP on beneficiary access, GAO reviewed information about CMS's efforts to monitor the effects of the CBP, and interviewed selected Medicare beneficiary organizations and state hospital associations. To describe the supplier markets, GAO analyzed 2014 Medicare claims data, the latest year with complete available data when GAO began this engagement.