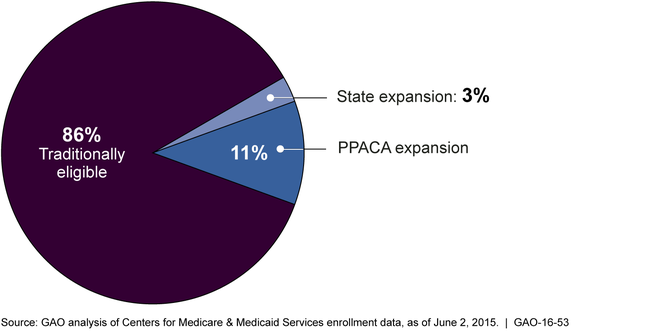 Historically, Medicaid eligibility has been limited to certain categories of low-income individuals, but PPACA, enacted on March 23, 2010, gave states the option to expand coverage to nearly all adults with incomes at or below 133 percent of the federal poverty level, beginning January 1, 2014. States that do so are eligible for increased federal matching rates for enrollees receiving coverage through the state option to expand Medicaid under PPACA, and where applicable, enrollees in states that expanded coverage prior to PPACA's enactment.

GAO was asked to examine Medicaid enrollment and expenditures, and CMS oversight of the appropriateness of federal matching funds. This report examines (1) Medicaid enrollment and spending in 2014 by different eligibility groups; and (2) how CMS ensures states are accurately determining eligibility, and that expenditures are appropriately matched. GAO analyzed enrollment and expenditure data for enrollee eligibility groups submitted by states to CMS, examined relevant federal laws and regulations, internal control standards, CMS guidance and oversight tools, and interviewed CMS officials.

GAO recommends that CMS (1) review federal determinations of Medicaid eligibility for accuracy, and (2) use the information obtained from the eligibility reviews to inform the expenditure review, and increase assurances that expenditures for the different eligibility groups are correctly reported and appropriately matched. In its response, the agency generally concurred with these recommendations.