The Federal Credit Reform Act of 1990 (FCRA) requires agencies to estimate the cost to the government of extending or guaranteeing credit. This cost, referred to as subsidy cost, equals the net present value of estimated cash flows from the government (e.g., loan disbursements and claim payments to lenders) minus estimated cash flows to the government (e.g., loan repayments, interest payments, fees, and recoveries on defaulted loans) over the life of the loan, excluding administrative costs. Discount rates that reflect the federal government's cost of financing are used to determine the net present value of estimated cash flows. Agencies generally update—or reestimate—subsidy costs annually to reflect both actual loan performance and changes in expected future loan performance.

Based on GAO's analyses of credit program reestimates for direct loans and loan guarantees obligated or committed from fiscal years 2001 through 2014 and considering various factors to identify trends, GAO did not identify any overall consistent trends in under- or overestimates of subsidy costs across federal credit programs government-wide. Overall, both direct loan and loan guarantee programs government-wide underestimated costs by $3.1 billion and $39.0 billion, respectively, over the 14-year period. These amounts represent less than 1 percent of the amounts disbursed or guaranteed during the period. Annual reestimates fluctuated from year to year, indicating both under- and overestimates of subsidy costs. Further, significant lifetime reestimates could generally be explained by specific events affecting a few large programs. For example, the Department of Housing and Urban Development's Mutual Mortgage Insurance Program reported underestimating costs over this period because of a variety of factors, including long-term housing prices and interest rate changes stemming from the mortgage and financial crises in the late 2000s. 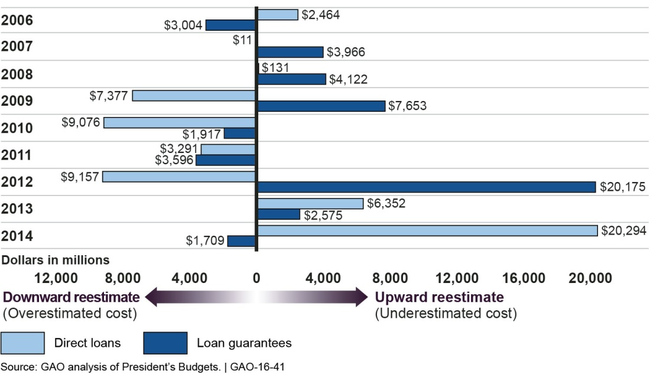 Reflecting a different concern, some proponents of the fair value approach cited as motivation the perceived overreliance on federal credit programs as a policy tool and the desire to correct any bias toward underestimates of costs under FCRA. Raising the subsidy cost would likely result in fewer loans being made. In contrast, some proponents of FCRA stated that any overreliance on credit programs should be addressed as a policy decision, and that to the extent that agencies were underestimating subsidy costs under FCRA, improvements in the subsidy estimation process should be pursued.

The additional market risk recognized under the fair value approach does not reflect additional cash costs beyond those already recognized by FCRA. The introduction of market risk into subsidy costs under the fair value approach would (1) be inconsistent with long-standing federal budgeting practices primarily based on cash outlays; (2) be inconsistent with the budgetary treatment of similarly risky programs; (3) introduce transparency and verification issues with respect to inclusion of a noncash cost in budget totals; and (4) involve significant implementation issues, such as the need for additional agency resources. Consequently, GAO does not support the use of the fair value approach to estimate subsidy costs for the budget and believes the current FCRA methodology is more appropriate for this purpose as it represents the best estimate of the direct cost to the government and is consistent with current budgetary practices.

Federal direct loans and loan guarantees outstanding have nearly doubled from $1.5 trillion at the end of fiscal year 2008 to $2.9 trillion at the end of fiscal year 2014. For the past several years, concerns have been raised by some experts both in and out of the federal government that FCRA may understate credit program subsidy costs. Some of these experts have suggested that FCRA be modified with an approach—referred to as the fair value approach—to include certain market risk not currently considered under FCRA.

GAO was asked to examine the budgetary treatment of the cost of federal credit programs. This report addresses (1) whether trends exist in subsidy cost reestimates and what factors, if any, help explain any significant trends in reestimates and (2) the implications of using the fair value approach to estimate subsidy costs in the budget and whether GAO believes such concepts should be incorporated into subsidy cost estimates for the budget.

GAO analyzed reestimate data from fiscal years 2001 to 2014 as reported in the President's Budgets and conducted interviews with 30 experts.

GAO supports maintaining the current FCRA method for estimating credit subsidy cost for the budget and therefore is not making any recommendations. The Congressional Budget Office and the Office of Management and Budget provided technical comments on a draft of this report, which have been incorporated as appropriate.