In prior work, GAO identified alternative measures that could be used to allocate Medicaid funding to states more equitably than the current Federal Medical Assistance Percentage (FMAP) formula, which uses per capita income (PCI) to calculate each state's federal matching rate. GAO found that PCI is a poor proxy for both the size of a state's population in need of Medicaid services and the ability of a state to fund Medicaid. GAO identified data sources, such as nationally representative federal surveys, which could be used to develop measures of the demand for Medicaid services, geographic cost differences, and state resources. These measures could be combined to provide a basis for allocating funds more equitably among states than the current FMAP.

GAO has found that, during economic downturns—when Medicaid enrollment can rise and state economies weaken—the FMAP formula does not reflect current state economic conditions, and that past efforts to provide states with temporary increases in the FMAP were not as timely or responsive as they could have been. To be effective at stabilizing states' funding of Medicaid programs during such periods, assistance should be provided—or at least authorized—close to the beginning of a downturn. Additionally, to be efficient, funds should be targeted to states commensurate with their level of need due to the downturn. To help ensure that federal funding efficiently and effectively responds to states' needs during economic downturns, GAO developed a prototype formula that offers an option for providing temporary automatic, timely, and targeted assistance during a national economic downturn through an increased FMAP. The formula's automatic trigger would use readily available economic data (e.g., the monthly employment-to-population ratio or EPOP) to begin assistance. Targeted state assistance would be calculated based on (1) increases in state unemployment and (2) reductions in total wages and salaries. 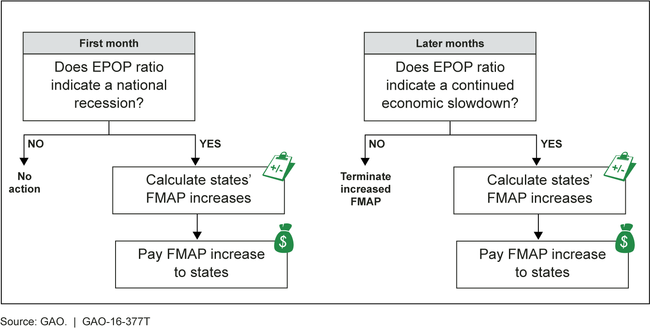 Medicaid, a joint federal-state health care program for low income and medically needy individuals, is a significant component of federal and state budgets, with estimated outlays of $529 billion in fiscal year 2015. States and the federal government share in the financing of the Medicaid program, with the federal government matching state expenditures for Medicaid services on the basis of the FMAP formula. The FMAP is the percentage of expenditures for most Medicaid services that the federal government pays. In prior reports, GAO has examined multiple concerns regarding how the FMAP formula allocates funds among states, including during times of economic downturn, and has suggested possible improvements.

This statement highlights (1) alternative measures for allocating Medicaid funds across states, and (2) better allocating financial assistance to state Medicaid programs during economic downturns. This testimony is based on GAO reports issued between 2003 and 2015 on federal financing of the Medicaid program.